7 Simple Principles To Ensure Success On Your Next Shoot

A few months ago, I was involved in a shoot that seemed to do everything right. Managing ever larger shoots, photo or video, is not rocket science but does require planning and thought. Here are some basic pointers of what I saw first hand that we can all apply to increase the chances of successful outcomes on our shoots.

Success Is Not Elusive

This is a quick guide, based off of one shoot, and aims to provide a quick structure to answering the question, “How do you plan for success on a small-to-medium job?” This is NOT a full and complete “How To” for managing productions.

The shoot pulled together a bunch of individuals who had not worked together to create a video project for a client. The client, a yoga instructor, wanted an instructional yoga DVD shot and edited. I was hired as one of three camera operators. A team made up of strangers pulled together and produced a brilliant outcome. The question I was left with at the end of the day was, “How did it all come together so well?”

Jillian Ezra, owner of Los Angeles-based video production company Ezra Productions, was instrumental in being able to answer this. In her own words – the biggest job she had ever taken on. She’d also built the team from her home in LA for a shoot that took place in New York. 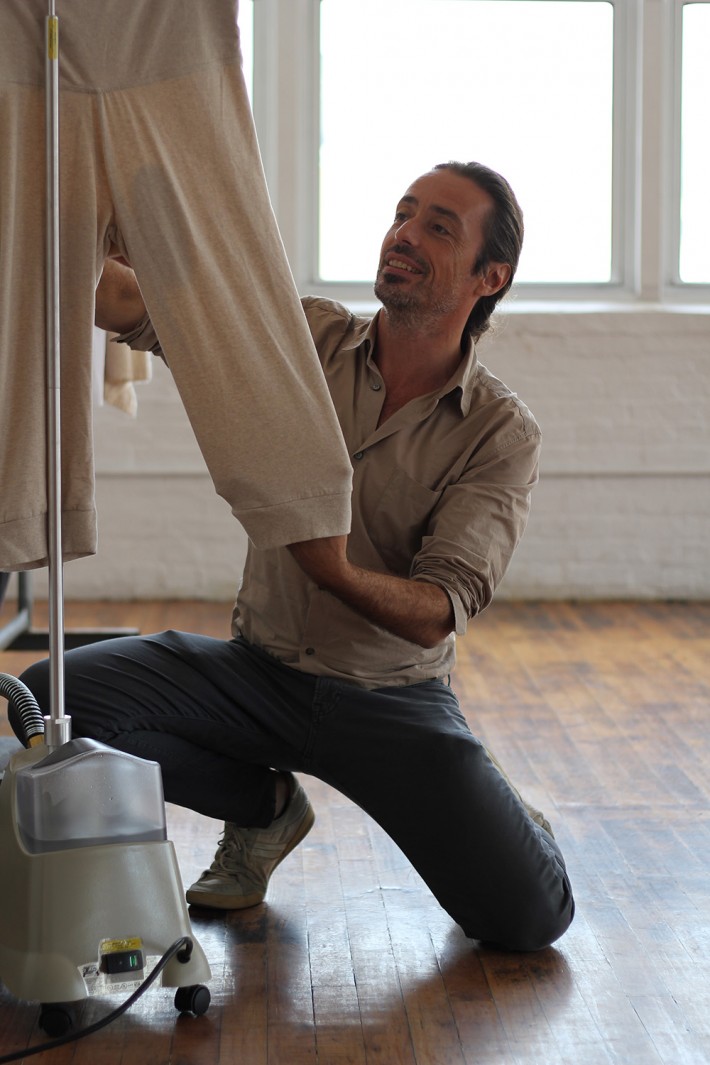 I sat down with Jillian the next day to understand what she’d done so that I could try and understand how she’d orchestrated everything so well.

Simple Principles To Get Set Up For Success

This article offers up a few simple pointers that you may want to think about when you put together and manage your next production.

Jillian laid out a few fundamentals that enabled her to win the job.

She told me she was introduced to the client through a mutual friend. She found the director while researching yoga videos online. For many of us, recommendations and word of mouth are invaluable tools to connect from one paid job to the next.

Jillian said the client was initially interested in doing a video production but wasn’t sure what it should look like. Discussion went back and forth for months before a contract was signed. Understanding your client’s needs is key. Jillian spent time analyzing what else existed in the yoga instructional market, put a proposal together, outlined where she thought her client should be positioned and why. 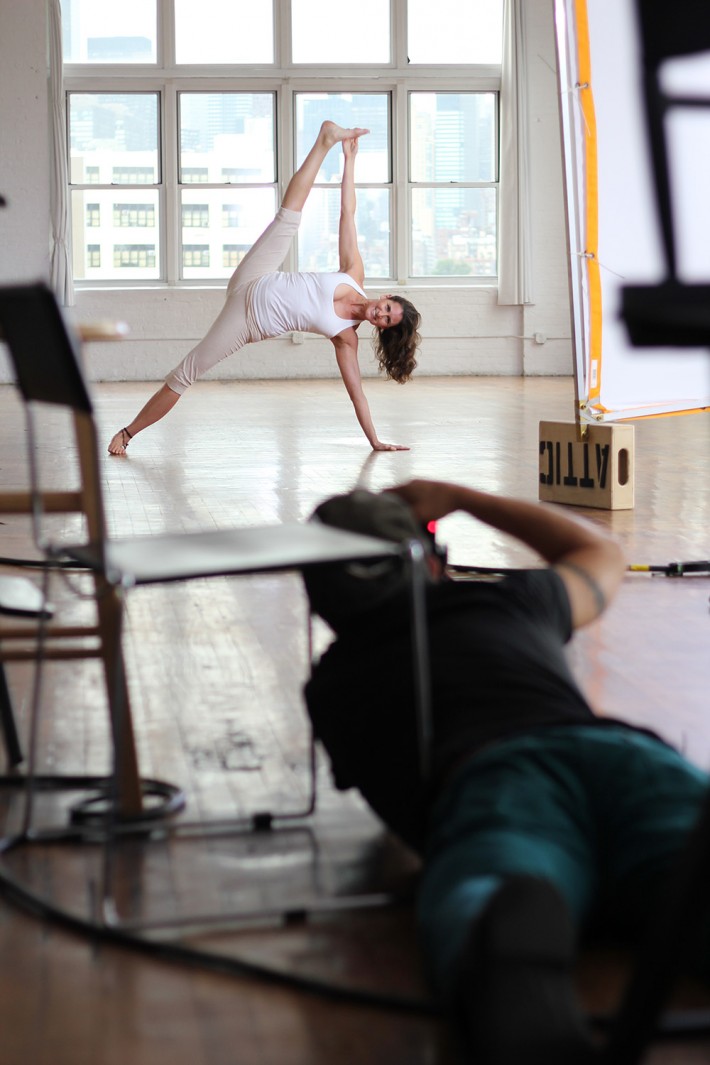 A few stills were shot as promo pieces

Do your homework, know what your client wants and have a view on how to position them in that space through your photo or video work. Working with talented individuals opens doors, but helping the client define what they want, what’s right for them and how to deliver to their budget and time are all critical success factors. Almost every client couldn’t care less about what gear you use. They want to be clear about what they are getting, for how much and by when.

Careful budgeting resulted in a 25% gross profit margin on the job. Jillian had to account for her and the director to fly from LA to New York, but they did it economically, staying with friends and using Air B&B instead of using the budget to pay for overpriced hotel accommodation.

Jillian made it a point to be very open with her client, detailing breakdown of costs so that the client could see where her money was being spent. Not everyone will want to do this, but this trust helped increase the budget later on when Jillian asked the client for more money based on the growing scope of the production. By being clear about what the budget buys, clients can feel bought into the project, and can understand why more money is needed if and when the scope of the project grows.

3). The Importance Of Pre-Production

Jillian said she made sure to build a strong team of people who individually had a lot of great collective experience.

The experience Jillian herself said she lacked, was offset by the experience of the director she brought onboard. None of us know everything, delegating and pulling in the experience from the team you build is critical.

Throughout the day, I chatted with Jillian about my previous shoots, equipment, lighting, camera technique and so on. She had a genuine curiosity. It never felt forced and I was happy to impart what I had picked up along the way.

Asking for a team member’s insight and advice costs nothing and will help build your own knowledge base. Jillian also worked closely with her client, updating her and letting her know how pre-production was progressing. She made sure she was aware of what (and how) to practice ahead of the several hours of yoga she would be expected to perform on the day of the shoot. The client was relaxed and happy on set at all times. Time spent planning definitely paid out on the day of the shoot.

Picking the right people for the job is a critical step in the overall success of your shoot.

Meena, a friend of Jillian’s managed all of the data files coming off of the three cameras. Meena had never managed data in this way before. This didn’t deter Jillian who knew her friend’s attention to detail would help ensure the data was managed properly. 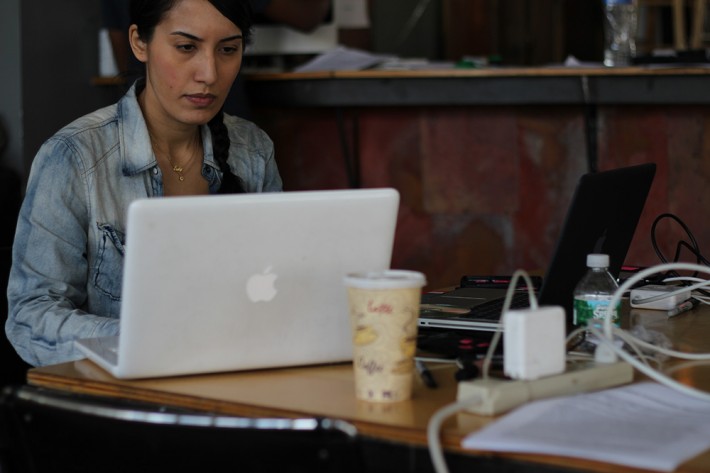 Meena and Jillian built out a filing structure, labeling cards and cameras to manage the workflow. This was clearly coordinated with the production assistants and camera operators, who worked together to pass data and clean cards back and forth. The whole process ran flawlessly, and again, it reminded me that pre-planning and playing to an individual’s strengths can be as important as someone with extensive previous experience.

Jillian built her team from scratch through contacts and recommendations. She did her homework - every reference that was included on resumes was followed up on before someone was brought on board. She contacted each individual to get a sense of their personality and to make sure they would integrate well on the day. 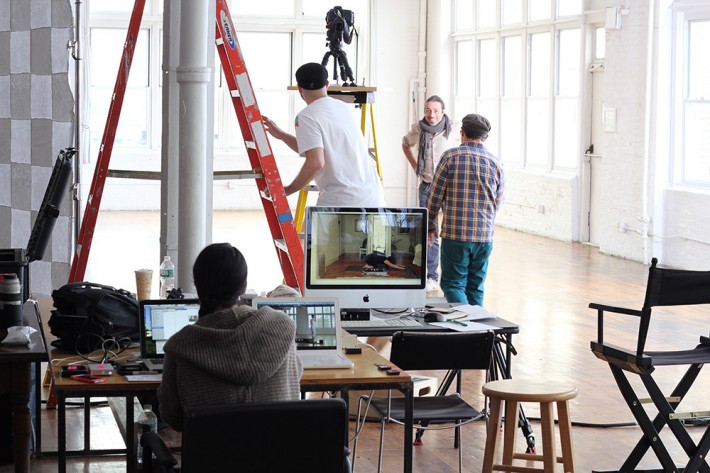 On the day of the shoot, with our call sheet, schedule and shot list, we also got a mini bio of each crew member. At first I was surprised as I’d never seen anything like that before but over coffee and then lunch, this turned into a great ice breaker over coffee and then lunch. In a very short space of time, we ended up bonding closely, much more so than a typical shoot with people you haven’t worked with before.

I saw more instances of people helping each other out than on any other production of this nature I’d worked on, and being genuinely happy to do so. Connecting people is something Jillian sees as integral to a successful shoot and it helps build a sense of team work on the day. 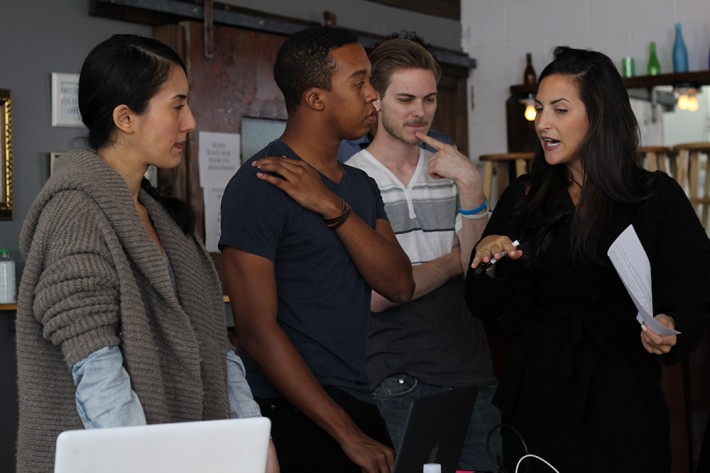 It almost goes without saying, but no amount of planning covers every eventuality on the day of the shoot. At one point when we were behind schedule, Jillian split the team up so that some of the production assistants were tasked with setting up for the external shot on the roof top. While the luxury of having dedicated production assistants to adjust lighting is always welcomed, by pulling together as a small team, the director and I just made small adjustments ourselves in between shots. No one complained or questioned it, we just got the job done. The team building that had gone on earlier on in the day certainly helped pull us together to just get on with it.

Being pragmatic is essential, but having a team of people willing to change and do what’s needed is just as important.

Jillian worked incredibly hard to make sure the day went well both for the client and crew. She constantly made sure her client was happy, and that she was clear on what they doing and why. Jillian also made sure the crew were looked after and having fun. At the end of the day, she bought the crew food and we had a bbq family dinner and some beers.

This was a nice touch that the whole crew appreciated and was a great way to end the day. 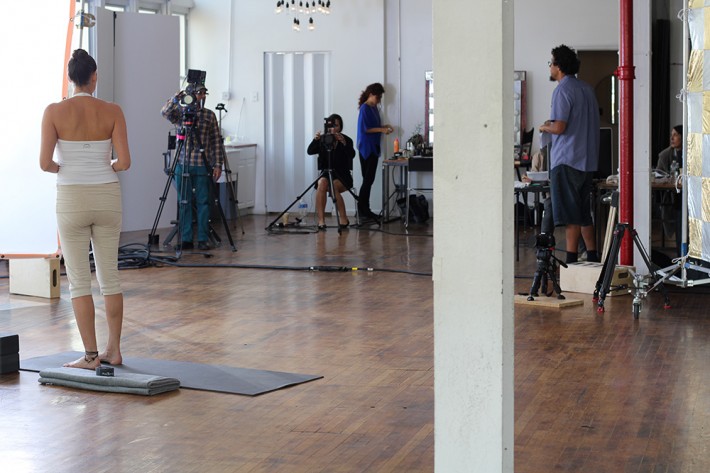 This is  just a summary of my thoughts from one really successful shoot. It’s the sort of stuff we can easily forget when we get caught up in planning our shoots, particularly those that might be a little out of our comfort zone. I also saw the client's feedback from the end result - it was really singing the praises of the entire team.

In Jillian's own words:

“standing behind what you told your client they would get, and having a sense of dignity and pride in the work you will be producing is absolutely crucial”.

It’s motivating to work with people that care so deeply about their job. I think Greg Heisler said the key to his success was treating each job as if it was his first.

Please comment and mention anything that – in your own experience - helps set up a shoot for success. The aim of this article is to try and help one another get set up for success and a reminder that actually, applying some pretty simple principles but being careful not to forget about them, can give you a great foundation for a successful shoot.

Thanks to Jillian at Ezra Productions

Great article Dave! I've always felt that working on productions that Photography is about 10% of the job. The rest is all pre-production work and meetings.

Thanks Manny, glad you enjoyed!

My recent experience working in house for a fashion designer would absolutely back up what you've said. In fact, i would say it may even be lower than 10% for the editorial shoots we are working on. It's such a small (but obviously significant) proportion of all the prep, planning, meetings, logistics, pre and post production that goes into the total time of the shoot.

thanks, glad you enjoyed it!