"Here come the G's." Words that might not mean anything to you sitting at your computer, but if you're strapped into the back seat of an F-16, it means remember your breathing training and don't pass out. Blair Bunting, recent addition to the Nikon Ambassadors list, took to the skies with the United Air Force Thunderbirds in part to see if he could sustain 9 G's.

Blair describes what 9 G's feels like, to those of you who were curious:

Now let me try my best to explain what 9 G’s feels like… Firstly, in no way is it comfortable, not even close. I began to feel my face melting away as the skin in my cheeks pulled down to my mouth. The color from my vision was the next thing to fade away, first the reds, then the greens. Squeezing like hell, I did everything I could to get air into my lungs as the G-suit wrenched it out. With all the color of a 1950′s television set, the next thing I noticed was that waves were starting to develop in my vision and a vignette appeared. All the while I am listening to the pilot’s breathing and trying my hardest to match it. At any point I could relax and immediately be unconscious, only to wake up and wonder where I am, but I had trained too hard to let this happen. Then, just as G’s set had set in, they began to leave and normalcy appeared. However, if I were to relax at that point, the blood would leave my brain to fast and knock me out as well, so I continually squeeze as the G’s lift and my body slowly returns to what sanity it had left.

With the chaos that maneuvers gave, a balance came as we traded G’s for the world’s craziest site seeing tour. Dropping down to the lowest altitude we were allowed, we decided it would be fun to give someone else a story that no one would believe. We found the highway that runs between Phoenix and Las Vegas and flew along it at a significant speed with the smoke on, topping it off with crossing a bridge low, for all the traffic to see and for none of their friends to believe.

I was standing on the tarmac as Blair flew with the Thunderbirds and let me tell you: keeping the jet in frame with a 200mm lens as it blasted from the end of the runway into the heavens was the single toughest shot I have successfully nailed in my career. Most photogs shooting an F-16 takeoff go in expecting it to mimic what they are used to seeing at commercial airports. I was luckily briefed beforehand or I would have made the same mistake:

"It will go straight up."

And it did. I can only imagine, through what Blair was able to describe, how that felt to be in the cockpit.

Blair also photographed the jet and the pilots, which we will show you a BTS of at a later date. 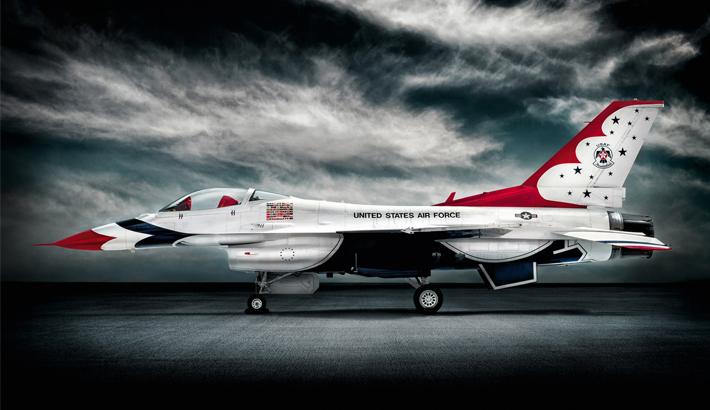 To get Blair's full rundown on the what and why, head over to his blog.

nice. Good to know how and where your photography career can take you. :)

This is ssssssssssssssick!!!!!!!!! Nice job Blair and Jaron.

Thanks guys! Credit goes to Jaron and the Thunderbirds on this one. I just sat there and tried to breathe, they made me look cool.

i can't believe you didn't black out, i used to be in the service and some of our maintenance guys got to take a backseat ride on our f-18's most of them blacked out around 2-3g's

Hi Blair! is there any special way to prepare for this?

Training was rough to say the least. I was a lot of cardio and lower body, however some exercises were combined with the breathing that one does for heavy G’s. Squeeze your feet, then calves, then quads then butt extremely hard and then lock off your breathing while tightening the rest. You will get the biggest blood rush to your head and it is NOT comfortable. Then combine it with a workout and you see why it can be rough for weeks on end

This is crazy. Really want and dont want to try this...

Very well done all around. Jaron, great piece. Blair, you're a rock star.

Blair did so good! Would have been puke city for me. Some stills around the prep and post celebration: http://www.dantabar.com/portfolio/blair-bunting-thunderbirds-flight/

Wait a sec... Mobile phones can cause issues with passenger airlines but not these awesome hi-tech jets.. seriously? (2:05)

There is something called Airplane Mode.

I realise there is an airplane mode.. air stewards don't let me use that either..just saying

Even at cruising altitude? Because I, nor anyone I know, has ever had a problem. And now with new airline regulations you can use small portable electronics, i.e. phones, ipods, etc, anytime during a flight.

Maybe its an Australian thing... they ask for all electronic devices be turned off... I have tried turning them on at cruising altitude and am usually met with attitude.... maybe they just don't like me ..lol

So you mean to tell me that in the country where everything is trying to kill you that you're afraid of cell phones on planes? Haha

lol.. I guess someone is