In this video, Guadalajara-based Photographer and Retoucher Sid Vasandani, shows us how to recreate that classic Steven Meisel vibe, used in his controversial campaigns for Vague Italia's, "Makeover Madness" and "Supermodel Enter Rehab". Watch as Sid walks us through a behind-the-scenes shoot, where he runs down the lighting set up, before going into an in-depth explanation of the retouching and color grading workflow in Photoshop.

Pretty cool right? What's equally cool is that Sid used, for the most part, some pretty inexpensive gear to get this look. Case in point, you can get a used Nikon D5100 Digital SLR Camera for about $240 on B&H, the Yongnuo YN560-III Speedlite for $64 and the Sigma 18-35mm f/1.8 DC HSM Art Lens for a notably more pricey $799. Still, pretty impressive when you consider that, with a little shopping around, some drive, a good crew and the education provided here, you can turn out works similar to some of the most sought after photographers in the world.

If Steven Meisel isn't your cup of tea, Sid has you covered.  As the founder of StyleMyPic.com, a company specializing in Photoshop Actions and Lightroom Presets, Sid has put out other tutorials that teach you to recreate the styles of photographers such as: Mario Testino, Herb Ritts, Annie Leibovitz, and Richard Avedon (to name a few). For more cool tutorials subscribe to StyleMyPic's YouTube Channel.

If you end up using any of these tutorials to knock out some killer frames, be sure to show us how they turned out in the comments below. 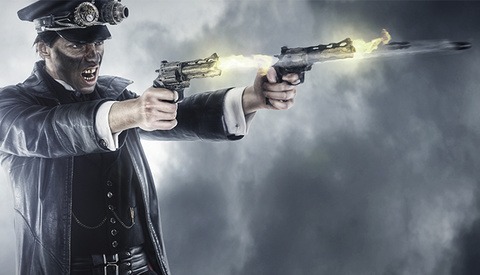 Composite / February 28, 2020
How to Create Bullet Haze and Fire Haze in Photoshop

That's the first time I've seen one of those videos, honestly that was really impressive. Such targeted adjustments and done without getting bogged down in details.

Thanks for taking the time to do this

Why not just buy a copy of MATTERS OF LIGHT AND DEPTH by Ross Lowel and learn solid lighting technique from a master? Works for cinematographers and top still shooters as well.

It's hardly a helpful tutorial if half the steps involve plugins you have to purchase from the guys website.

Great idea...but not so good execution. Was looking for actual in-depth 'how-to' and turns out to be a quick run through using a custom plugin in Photoshop. Unfortunately misses the point of what the masters were doing :/

When you wrote "Vague Italia's", what did you meant?

"...Vague Italia's, "Makeover Madness" and "Supermodel Enter Rehab".
Two of their past spreads.

your answer still seems a little vague to me.