Before I had a Wacom, I seriously questioned the ability that a touchpad without a screen would have to improve my editing workflow. Also the screen-integrated models were way too expensive for me to consider at the time. Those of us that have them now, however, see them as an invaluable tool in our work — and it’s one we probably want to protect.

If you use your Wacom tablet a good amount, you’ll notice numerous scratches all over the surface. This is completely normal. It doesn’t affect the performance of the tablet at all, but it’s a bit unsightly, and one might argue that the touch surface just doesn’t feel quite as nice after a while. Unfortunately, there’s nothing you can do about that — almost.

Apparently, POSRUS (read as “P.O.S. ‘R’ Us”), a screen protector brand that makes protective films for a variety of screen types, offers a screen protector for your Wacom tablet to take on the abuse of the incessant rubbing of your nibs on the touch-sensitive surface.

When I discovered this, I ordered one right away for a secondhand Intuos 5 Medium tablet that replaced my older Intuos 4 (for the record, the Intuos Pro Pen and Touch is the current, latest and greatest version, but is very similar to the Intuos 5 with its seemingly identical feature set). I got one in good condition and didn’t want its pretty surface to fade away under scratches as my Intuos 4 had done some time ago.

I did my research (or at least I think I did). I couldn’t find any other brand of screen protectors that made one just for this Wacom. I didn’t want to take a chance on getting the wrong size, having to cut it down, or not having adhesive line up properly. And so the day came when it arrived. 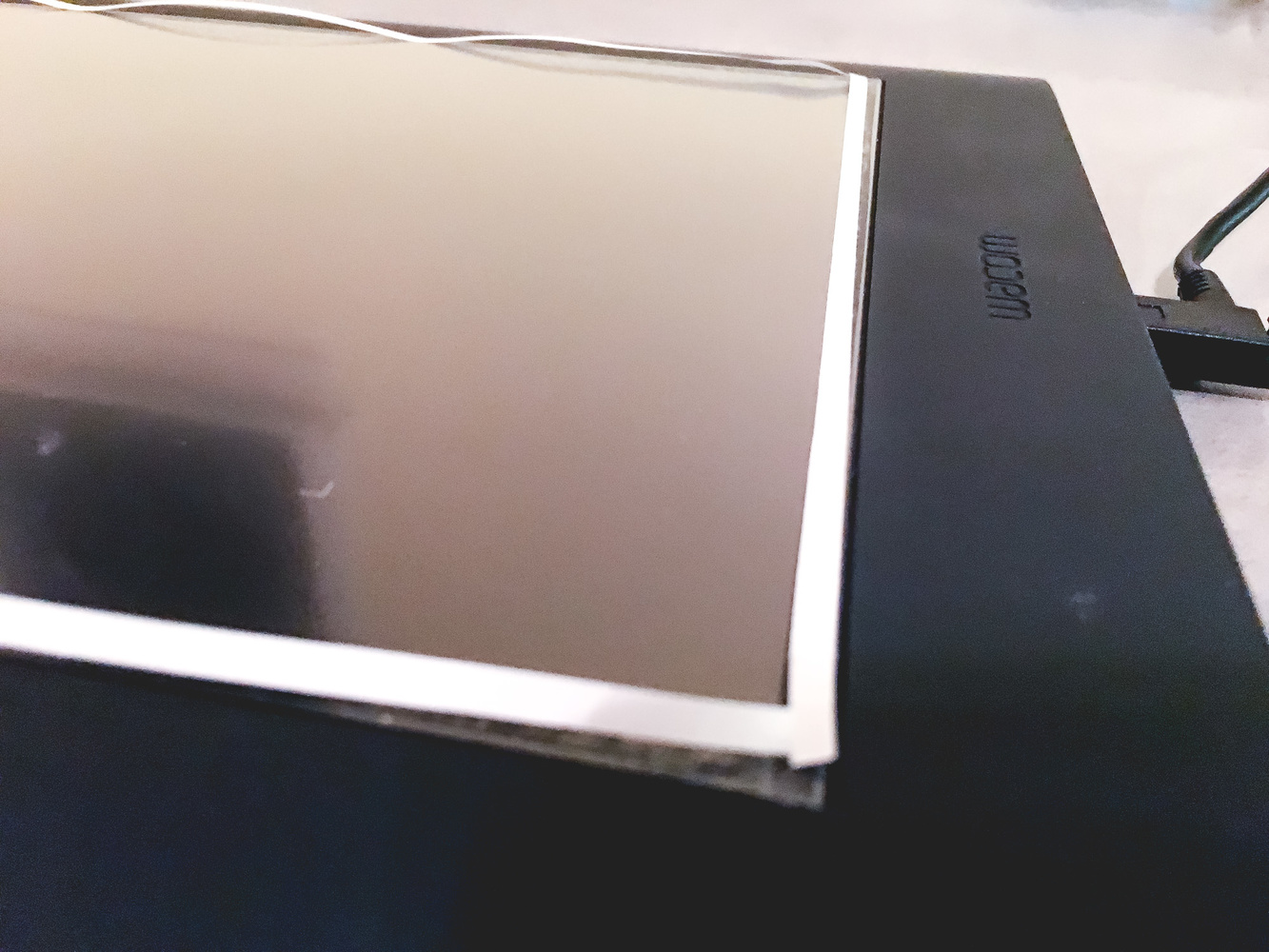 The POSRUS screen protector feels as though it’s high quality, but it’s definitely not thin by today’s slickest smartphone screen protector standards. Nevertheless, this makes it feel rather heavy-duty and creates what is very much its own writing surface.

This brings us to actually using the tablet with the protector on it. Yes, it’s slicker. The pen glides over the new surface much more easily as though it’s now a glossier surface. Of course, that is to be expected with less friction, which also promises to help lessen nib wear over time.

Other than the different feel (which other reviews claim is more like the Intuos 3’s original surface, although I wouldn’t know about that myself), the only other thing to consider is how it looks.

Honestly, I don’t care at all how it looks. It’s slightly glossy, reflects a bit of the ambient light, and won’t remind you of the nearly invisible smartphone or laptop screen protectors out there. And because it can’t rely on the static of an LCD display to cling into place, it has a thin row of adhesive along the entire outside edge that isn’t invisible either, but that’s at least removable and adjustable. Honestly though, who cares about any of that (aside from the removable adhesive backing — you want that)? You’re never looking at the thing when you’re editing.

Some might argue that it doesn’t feel like the “paper” finish on the latest Wacom Intuos Pro tablets. And no, it doesn’t. But, let's face it: the Intuos Pro tablets also don’t really feel like writing on paper anyway. It’s still different (anyone know where or why people started saying it was similar to writing on paper to begin with? Or is that just something only I have heard?).

So, at the end of the day, we’re left with function to consider. The POSRUS tablet protector does a nice job at that. The friction-reducing film puts a layer between your pen and the original tablet surface while your nibs will also benefit from the reduced wear. I honestly think the extra glossiness and smoothness adds to the ease of editing, allowing the pen to glide more effortlessly (it's like setting your trackpad sensitivity on its highest setting — crazy and weird at first, but the best and fastest way to work once you get used to it).

The packaging is very simple, consisting of a bubble envelope for shipping inside of which is a piece of cardboard to keep the protector rigid and the protector itself in a Ziplock-type bag (although my bag couldn’t close because it wasn’t large enough for the product).

Once you open the package and take the screen protector out, a film that protects the underside of the protector from dust until just before you’re ready to apply easily peels off, followed by the four outer strips covering the adhesive that will hold it all in place. We all know the feeling of trying to get that protector perfectly lined up, and this is no different. But the tacky-but-not-too-tacky nature of the adhesive is perfect for picking the protector up and realigning it until you feel it’s just where it needs to be. 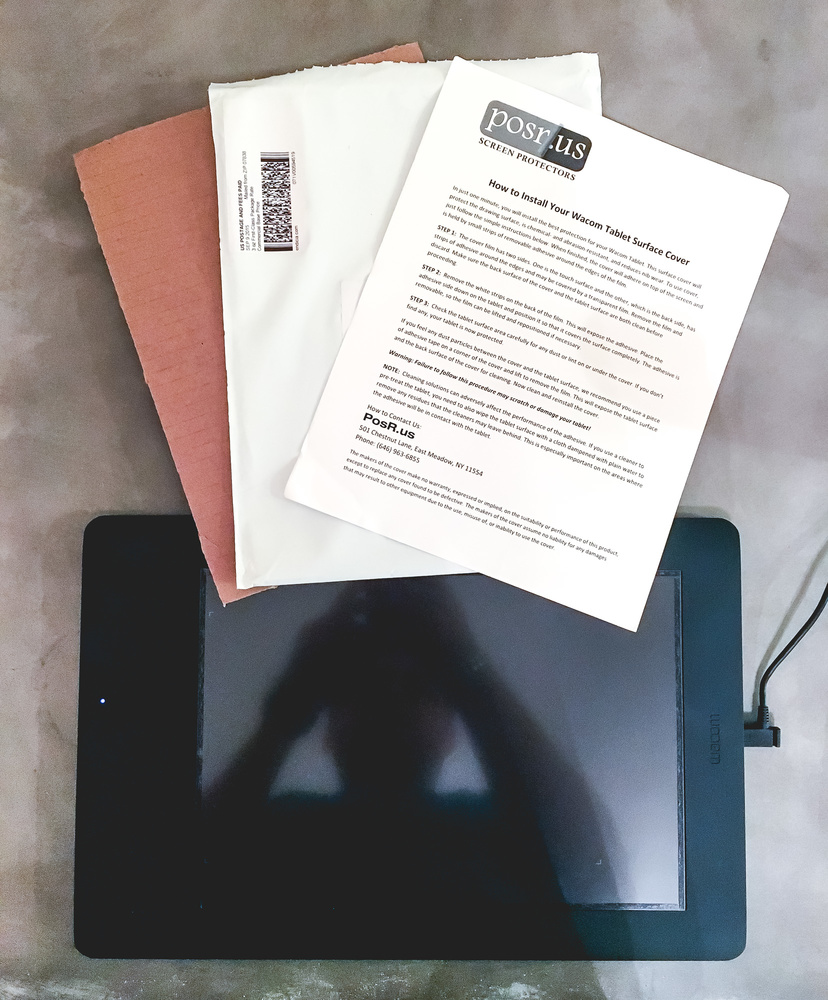 It’s high quality and durable, and does the job as advertised. What more could you want? And at $10 plus a couple bucks in shipping, it hardly breaks the bank.

There’s nothing that I really care about to mention here. But if I had to choose, it might have been nice to have a thinner, less noticeable form to the protective film. While its glossiness would bother me on a screen, that's of course a moot point here.

Now that I have your attention, there is one thing to know about this screen protector. You absolutely want to get the one that is the "new and larger" size to "cover the entire surface." A past version of these screen protectors covered only the active area of the tablets, so if you went over that space with your pen, you'd feel a click as the pen dipped down just a fraction of a millimeter from the film down to the original tablet surface behind it — and that would be unacceptable. I got the right version, and now you should be able to as well.

Any POSRUS screen protector can be found on their website (and they have many different types and finishes for other devices). This review examined the screen protector for the Intuos 5 Medium Pen and Touch tablet, of which there is only one. You can find a protector for virtually any device on Amazon or the POSRUS website. 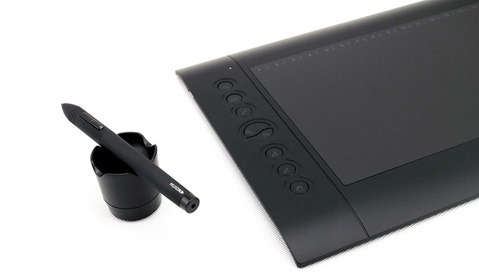 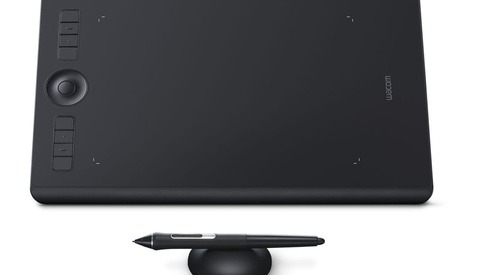 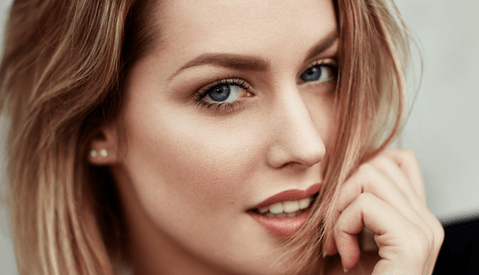 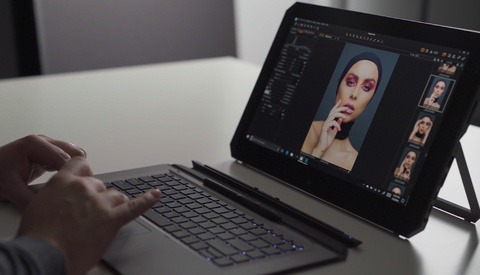 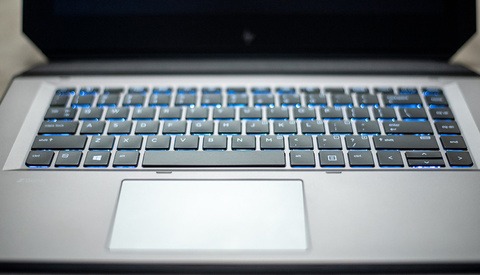 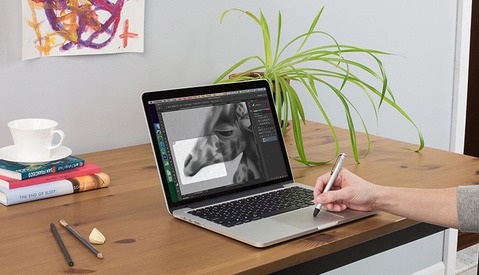 I just tape a piece of quality printer paper on the surface, and mark the screen guides on top. Feels like a ball point pen on paper, Which is nice.
Just replace it with a new sheet when it gets dirty.

Ha! Good on you and one of my recommended tricks for almost 20 years of using a Wacom. I personally hate the feeling of drawing/painting on plastic or glass. I can highly recommend the "B" side of Canon Color Copy 250g. It doesn't tend to roll or wave; also it has just enough tack and friction to be exactly like sketching on paper, yet is friendly to nibs.

Just amateurs care about scratches :) Pro's don't care as long is working properly how it supposed to work. That is fine it is not the end of the world :)

"My question is how it affects the acuity and the sensitivity of the pen."

Basically no difference whatsoever. I've also used 300-350g paper as an overlay as well, but have settled with the 250g for longer than I can remember. You can see my comment abobe: I've also been using Wacom's since they hit the market in the mid-90's.

Wacom themselves supply these sheets with correct display markings. My personal preference is the more "paper like" feel than the glossy surface, the resistance helps me be more precise. The wear of nibs? I'm still on my original set after 5 years of day to day use. A new complete set of nibs is less than 25 Euro's... so yeah not a real deal breaker there....

I'm surprised that more folks haven't caught on to this frankly. When I was looking into using a tablet in winter 2013 I found two major complaints from folks about the "new" Wacom Intuos 4:

1) The surface was too rough to work on compared to the Intuos 3
2) It was eating nibs like crazy causing them to keep buying them.

I got the POSRUS cover when I bought my tablet, simply taped it on with gaffers tape and will continue to do so in the near future. My setup hasn't changed and the surface remains consistently smooth.

While I don't retouch as much as my retouching idols Julia or Pratik I've been averaging 30 min/night over the last two years and I'm still on my FIRST NIB!! 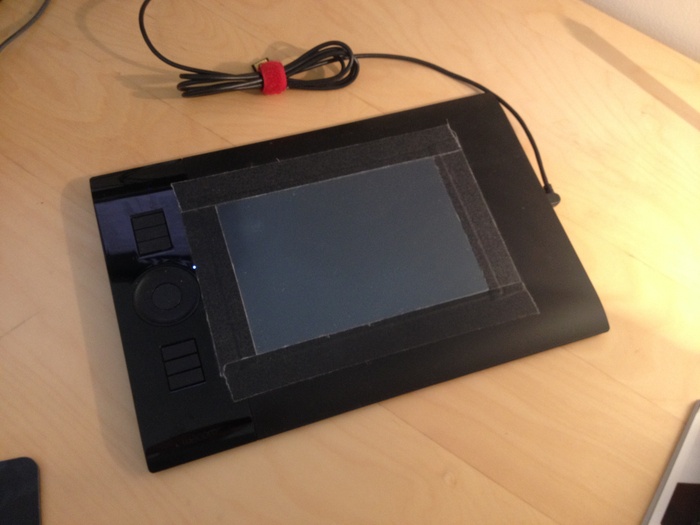 I feel the exact opposite. I can't believe people are worried enough about wear on their tablet that they are buying protective covers. Is the surface of the new pro a bit rough? Well, coming from a thoroughly worn Intuos 3 it initially felt a bit rough, but that didn't last long. Right now the work surface of my Intuos Pro is polished to a smooth and glossy finish, just from use. Meanwhile I'm still using the nib that came in the pen. ;)

Intuos 4 and previous offered the possibility of changing the surface. You could buy surface replacement from B&H and other Wacom suppliers. I haven't found any for the Intuos 5 and more recent versions, which is a shame! Excellent alternative, but I am wondering how it changes the pressure and pen sensitivity.

Touch and pressure sensitivity are seemingly identical (I can't tell a difference no matter how hard I try). The ONE thing that is slightly different: if there is any oil on your fingers at all, using touch with your fingers directly for the Pen and Touch models isn't as smooth.... It "catches" on your fingers just slightly. So...the pen is smoother, fingers not so much (unless you just wash your hands right before you edit...which is perfectly possible, I suppose). In terms of actual contact with the device, though, everything is completely identical in function, behavior, sensitivity, etc...

will we be able to use TOUCH feature after putting this on wacom surface.?!

Yes, of course! It still engages touch on mine half the time when I don't want it to, even ;-)

Please, please, PLEASE don't get a surface protector. Its bad for several reasons: look, feel, and accuracy.
Intuos are designed to have friction. Your eye-to-hand coordination will suffer. Oil Build-up from your skin and "plastic" are a no-no. You won't be able to register strokes as accurately because your sliding everywhere!
-Don't get a protector because it "looks cool". If you're worried about nib wear, replace them like you should and you won't get scratches. You can literally make countless nibs out of weed eater trimmer if you low on funds.
-Wipe your surface with a damp cloth to prevent build-up. Replace nibs, and use a drawing glove to prevent oil embedding.
-If all else has failed tape a piece of rough paper. I've even used granite dust to increase friction.

Excellent post. Thanks for sharing……….
I suggest any XP-Pen cheaper tablet. I started off with the XP-Pen Deco MINI7 : https://www.xp-pen.com/product/613.html , it's fine with both osu! and digital drawing. The tablet is really good. The overall build quality is excellent, the tablet is responsive, and it just looks really nice to have.
I don't need the protector , I just need more pen nibs . if broken I will get a new one.