A to Z of Photography: Tilt-Shift and Train Wreck at Montparnasse

This week we turn to a train wreck of an image — yes the iconic photo "Train Wreck at Montparnasse Station"! But before we get to that, step back to the dawn of photography and understand the principles behind tilting and shifting the lens relative to the sensor. Some of the highest profile photographers use tilt-shift lenses in their day-to-day work, so find out why that is.

Is there something so inherent to the design of the camera, yet so alien, so distant from it's original form, that we take it for granted? It's placing the lens parallel to the image plane, centering it upon the middle of the sensor. Take a look at the camera below that dates to the 1850s — not a screw mount in sight. You have a light proof box that takes the dark slide (holding the light sensitized "film"), to which is attached light proof bellows fronted by a lens mount, to which a lens slides in (not too dissimilar to how we use filter attachments today). 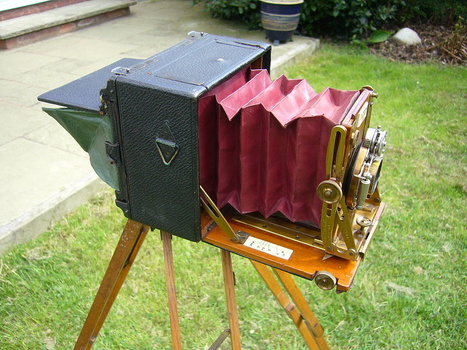 In modern cameras we typically are only able to change the distance between the image plane and lens — the focal length. Yet the amount of movement of the lens relative to image plane is phenomenal breaking down to the three axes of rotation (up-down, side-to-side, around), plus movement of the lens itself up-down and left-right. The former is what we call tilting and the latter shifting.

Tilt-shift likely developed out of the experimental nature of early photography and the desire to change focal length using simple lenses. However the introduction of handheld cameras largely set the tone for the mass produced market, although view cameras continued to use traditional designs. It wasn't until the 1960s that dedicated SLR lenses catering for tilt-shift appeared.

So what does tilting and shifting actually do to the image as recorded on the sensor? Tilting has the effect of controlling the Plane-of-Focus (PoF). In a standard configuration this is parallel to the image plane (and lens plane) and is something so fundamental that, visually, it has become imprinted in our psyche. Tilting the lens allows us to move the PoF to any orientation in the scene. When they cease to be parallel, the three planes (PoF, image plane, lens plane) conceptually intersect at a common point. This is called the Scheimpflug Principle and understanding it allows you to visualize where the PoF lies. If you tilt the lens toward your subject the PoF increasingly becomes aligned parallel to it. If you tilt the lens away from your subject the PoF increasingly intersects it (eventually at right angles). Once you have tilt, then changing focus also tilts the PoF so you need to work both together and it's important to remember that the depth-of-field is actually wedge shaped rather than fixed. This detailed article from Northlight Images is a great resource to get started.

Portrait photographers have exploited this to create highly distinctive images which align the PoF with aspects of their scene. For example, Greg Heisler shot the cover of Time for their "Person of the Year" that had Bono and Bill and Melinda Gates. For this he used a tilt-shift lens to maintain the PoF across the faces.

Where you swing the PoF across the subject (rather than aligned to it) you can create fake miniature scenes. These mimic the optical principle of the shallow depth-of-field we associate with photographing miniature scenes, allowing us to fake it for the real world. You can also do this digitally in post-production, but it's way more fun to swing your lens the other way and use a tilt-shift! 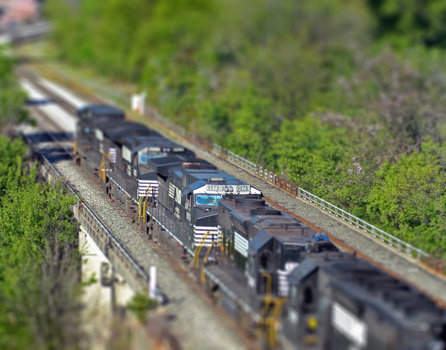 Shift movements adjust for the field-of-view up-down and left-right however to achieve this, the lens must have a larger than normal image circle.When used with wider angle lenses, small shifts can significantly alter what appears in the image.The key application has been in architectural photography where cameras need to be tilted upwards to photograph buildings — as there are shape distortions (and so converging vertical lines) if objects are not parallel to the image plane, buildings are not rendered faithfully. Shifting largely solves this problem.

Tilt-shift lenses are relatively expensive in comparison to their same-focal length counterparts, however If you haven't rented one for the weekend why not give it a go, then read Scott Choucino's "Five Reasons" on why he uses a tilt-shift. You might just discover what a fantastic aid to creativity they can be.

What has this got to do with trains and the Montparnasse Station in Paris? The title is a giveaway as it's a train wreck, however to misquote George Orwell, "not all train wrecks are created equal." This is spectacular by it's unusualness — I can't say I have seen a train standing vertically on its nose before, having exited the station through the ticket hall. The very scene invites narrative to accompany it as it starts a story and we want to know the ending. This is not to belittle the tragedy that the scene implies and potential for human loss. Coming in to a terminus station, we assume it was a passenger train and, indeed, there were 131 passengers on board. It also speaks to a capital city and the busy, bustling, daily lives that it's residents on the street below led.

Tragedy is newsworthy for two reasons. Firstly in the sense that we want to read about events that happen in our world. We gape and gawp, crowd around, and, in our modern world, live stream it. We might see this behavior as reprehensible but universally we are transfixed by tragedy and, as Avenue Q explains with Schadenfreude, there might even be pleasure in someone else's pain. How much empathy we feel for others will be born and bred in to us. The next time you view a photographic scene of tragedy, ask yourself how much of the pain and sadness you feel for those in the photo?

The second reason is that it is vital to consume these events as a society, responding to them collectively. Our first response might be to grieve for those involved — in the UK, the mass out-pouring of emotion after Princess Diana died was unique. This may then be followed by remedial action where the public decries an outcome and demands the intervention of politicians: the Paddington train derailment led to a change in safety procedures, whilst the Christchurch mass shooting to a change in gun laws.

So what is the story in this photo? This is the Granville to Paris Express comprised of a loco, three luggage vans, a post van, and six passenger cars which was due to arrive shortly before 4pm on 22 October 1895. Running a few minutes late, the driver entered the station too rapidly, trying to make up for lost time. The air brake on the engine failed and the locomotive ran through the buffer stop, across the concourse, and fell on to the Place de Rennes below. Remarkably only one person was killed, a pedestrian in the street. The loco remained in place for two days whilst due process was followed, at which point it was winched back in to the station and repaired! The driver was fined 50 francs, equivalent to about $1,500 today.

Interest in tragedy is easy to explain without invoking schadenfreude. it's an evolutionary imperative - we want to learn from other's mistakes so that the same thing doesn't happen to us.