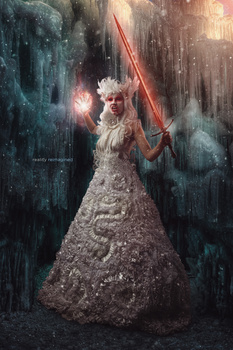 Wrath of the White Witch

As I began to expand my journey with Reality Reimagined, I soon realized that my type of work (at that time) was considered a 'specialty' and the word unique was often associated to my existence as an artist. Being unique is rad, for sure, but it can become a lonely road to traverse. I began to dream of scenarios where I could attend a weekend workshop with other composite artists and explore the aspects of our unique art form. I looked to the folks in the industry that were doing this type of work and fantasied that they would be my fellows in these magically creative weekend adventures.

Well finally after many years, that fantasy became a reality.

I recently traveled to Wisconsin to spend an amazing weekend with four incredibly talented individuals: Dan Frievalt, Rachel Frank, Nicole Bottensek and Cassi Dorff. Dan started the idea, modeled after his own experiences with other artists in our unique industry. I was so floored when he asked me if I would be interested, that I'm surprised that I didn't fall out of my chair. As we planned the weekend, we reached out to Rachel as we both are big admirers of her fantastic designs and she, as it turns out, is a fan of our work too!

She brought Nicole with her to model and Dan brought Cassi and the five of us had such a wonderful day of creativity.