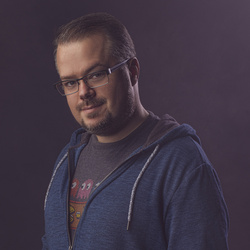 When I was a kid I would pin a red bath towel around my neck, climb up the highest fence and jump off. I was convinced that if my belief was strong enough, I would take flight like Superman. Growing up my imagination was my constant companion, helping me to write stories, draw pictures and live the tales that were being created every minute of every day. My first career and passion lead to a degree in Theatre and I spent a few years pursuing that goal of creativity, both on and off stage. This discipline allowed my imagination to flourish and soon the tales of my mind were being shown to the audiences that attended. But it was not enough.

In 2004 I engaged with Photoshop for the first time and my imagination, my world was forever changed. Suddenly the limits of storytelling were boundless and through photography and Photoshop, I could bring my imagination to the world.

I am an award winning photographer, Photoshop artist and the owner of Reality Reimagined. Through my brand I create images and composite artwork featuring genres of cosplay, fantasy and the stories in between. I have become an educator and will be speaking at conferences like Shutterfest and Capture Photocon. My biggest supporter and the center of my universe is my wonderful wife Bethany, who reminds me to never be afraid to fly. Together we have traveled the world and continue to explore all the possibilities of Reality Reimagined and the imagination it is based on.