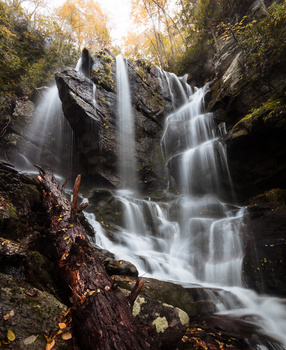 Secret Falls along the Blue Ridge Parkway in NC

I pride myself with the fact that I have seen almost all major waterfalls in a 50+ mile radius from where I live. Living on the border of Tennessee and North Carolina that is a lot. So one morning when shooting a sunrise on the Blue Ridge Parkway and a local was talking about this secret waterfall that has no trail, I was immediately hooked. I wasn't dressed for a hike at all. The local said the hike/climb down was pretty brutal. It had poured rain the night before. He gave me general things to look for on the side of the road and then said "Just find your way to the bottom." After some exploring I found the general pull off and hit the woods down the ridge. I came to a point in which I almost turned around and gave up because it was just way to steep for the mud covered ground. But after a few moments to gather my courage I went down a mud slide and then to another mud slide and then to a rock climb to turn around and have this view. I was so exhausted that it didn't feel real standing in front of this in North Carolina. But it was real. And I was in heaven on earth.

nice one :) would love to see some more advanced colors

Thank you for the feedback. When you say advanced do you mean more saturated or more contrasting colors?

I would say a bit more saturated with the orange and red to make it a bit warmer maybe.

Beautiful image. There is a lot going on here. Mirroring Emanuel's comment I think the greens would look a little more balanced with some luminance and a touch of vibrance. They get a little flat looking in the rocks. But still fantastic as is.

Thanks for the feedback! Great to be part of a community that is helpful.