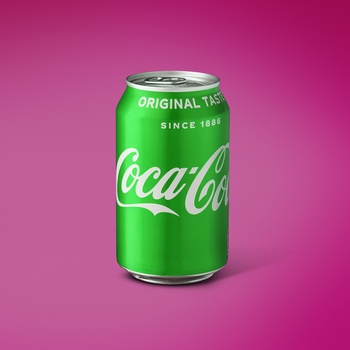 In an attempt to create a striking and visually appealing image of a well know brand with a different look, I took the iconic red CocaCola can and switched the colours to the complimentary pairing of green and pink. Whether I achieved that goal is up to you, but I think it’s quite a visually striking image.
The can was shot in isolation with diffusers along either side behind which were placed strip boxes. These create the gradients along the side of the can. An A0 sized white foamboard bounce card was used just below the camera which stretched out towards the can to try and get rid of the dark stripe from down the front of the can. Post production was limited to cleaning the can and making a selection around the red portions and using a Hue/Saturation adjustment layer to change the can to green. The background is a combination of coloured fill layers as well as gradients.