You might remember Brooks Reynolds, we have featured him and his amazing photography on here before. Recently I had a chance to catch up with Brooks and discuss his latest project, Footsteps, a short film based on a story he was introduced to via the internet.

Filmed on a Red Scarlett he used Lomo Anamorphic (round front) lenses. "I really wanted to shoot anamorphic, and I felt like this was the right project to use them on," Brooks said. Shooting anamorphic means the image must either be cropped in or shown as an extremely wide aspect ratio (3.79:1). Brooks opted to leave it uncropped. The crew itself was relatively small, no bigger than 6 people at a time, and it was filmed over two full weekends with a couple evening and night shots thrown in.

What is most interesting about this project to me is that Brooks found this story via a friend who posted it to Facebook from Reddit. After reading it and being totally blown away, Brooks immediately signed up for Reddit and messaged the author, Dathan Auerbach, telling him he would be interested in bringing his story to life in the form of a short film. After Dathan checked out his work, he contacted Brooks and gave him the go ahead to run with it. "The aesthetics of the story and the potential shots in it seemed right up my alley. The logistics seemed manageable. Obviously it was going to be a challenge but I felt like I could pull it off," said Brooks. The film itself was also edited and color graded almost entirely by Brooks, with some small tweaks from his 1st AD, David Ross.

Visually what I have seen so far looks amazing, which I am not surprised, as Brooks has been one the most visually inspiring photographers and film makers I have come across in a long while.

"I think the visuals were right in line with a good chunk of my already established inspirations. Certain shots were influenced by different movies and photographers. From Let Me In to ET and Close Encounters to The Dark Knight Rises. There was some elements of Bill Henson and Gregory Crewdson in there too. It is a very influenced short film but at the same time, I wanted it to feel quite real. Which was a challenge for shooting in a dark forest so there are some parts that take some cinematic liberties. There is one shot that is a direct copy from the independent video game Limbo, I wanted to give a little nod to what I thought was a masterpiece."

Check out more about Footsteps on the official website, and read up some more on it before the official release date of February 25th.

Check out some stills as well as a little behind the scenes compilation from the production below. 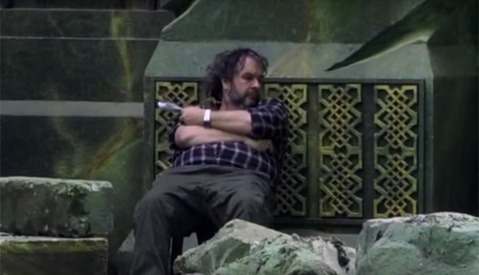 BTS / November 19, 2015
Incredibly Sad Video of How 'The Hobbit' Trilogy Was One of the Worst Films to Create and Eventually Watch

BTS / December 21, 2019
Corey Rich and the Stories Behind the Images
Log in or register to post comments
2 Comments

I freaking love this story online...excited to see his results.