In today's Fstoppers video, I set out to create some conceptual fashion images with Puerto Rican model Krystal Xamairy. Using the brand new Tamron 35mm f/1.4 lens, a few strobe lights, and a couple colored LED panels, I will walk you step by step through the entire process.

Tamron recently sent us their new 35mm f/1.4 full frame prime lens to try out. They basically told me I could do anything I wanted with the lens, so I thought I'd step out of my comfort zone and explore a style of photography that I don't get to do everyday. In this photoshoot, I wanted to create a set of whimsical fashion portraits using both strobe lights and constant LED lights. Shockingly, the results were pretty interesting, and the photoshoot turned out to be a ton of fun as well.

Anytime I'm given a super-fast-aperture lens, my natural inclination is to shoot it wide open. We all know how awesome images look with that sweet, blurry bokeh in the background, but since it's pretty hot outside here in Puerto Rico, I opted to shoot something in the studio. Instead of using this lens to produce the airy, Instagram-ready images a lens like this is so great at creating, I decided to stop it down a bit and shoot at its sharpest settings: f/2.8 - f/5.6. This photoshoot wouldn't be all about perfectly sharp images though; what I had planned was far from your typically safe studio shoot.

The images above were shoot entirely in camera. Using a single Profoto B10 strobe set to its lowest power and modified with a small 20-degree spot grid, I was able to light Krystal's face with a hard, contrasty burst of light. Since Krystal has such an unbelievably strong look, this often unflattering hard light actually showcased her strong facial features well. This sort of lighting is perfect for fashion, because it adds a lot of contrast to your subject and also makes colors pop off the page. To achieve the ghosting effect, I placed two Falcon Eyes F7 LED lights behind her on both the left and right sides of the camera. One was set to a cyan/blue color and the other was set to a red hue. In order to allow some of the light to bleed into my frame, the Profoto flash head had to be set fairly low (its lowest setting, in fact), and the LED lights had to be set almost to their maximum brightness. The camera settings for this shot were ISO 32, f/2.8, and a shutter speed of 1/2 a second.

The trick to these photos is to capture your model's best pose immediately with the flash and then have her move quickly during the remaining part of the exposure. Obviously, you will get more motion blur with a 2 or 4-second shutter than you will with a half-a-second shutter. As long as your main flash is a stop or two brighter than the LED lights, you will wind up with a photo that has a crisp and properly exposed model surrounded by beautiful motion blur. 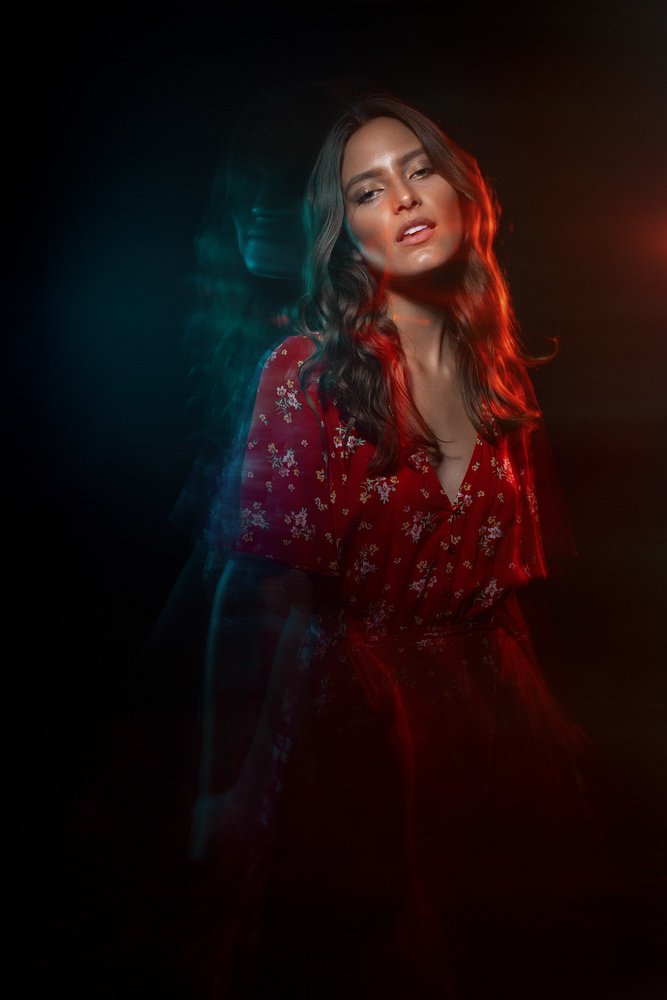 In the image above, I set the shutter to 2 full seconds and increased the aperture to f/5. Because of the aperture change, I also had to increase my Profoto B10 light up a full stop as well. The increased exposure time and allowed for even more motion blur, which created an effect I really liked. Keep in mind, these images are straight out of the camera with just some minor adjustments in Lightroom to crush the blacks and fine-tune the overall exposure.

After experimenting with this lighting setup, I decided to do something a bit more complex. Instead of trying to create an image entirely in camera, I thought it would be fun to build a more commercial style image using these same colored LEDs. For this shoot, I had Krystal change into an athletically themed outfit, and this time, instead of having her move around to create the motion blur, I simply used the LED lights to edge out the sides of her body. By having the colored light bleed into the final photos, it would make compositing additional light flares in the background more believable. 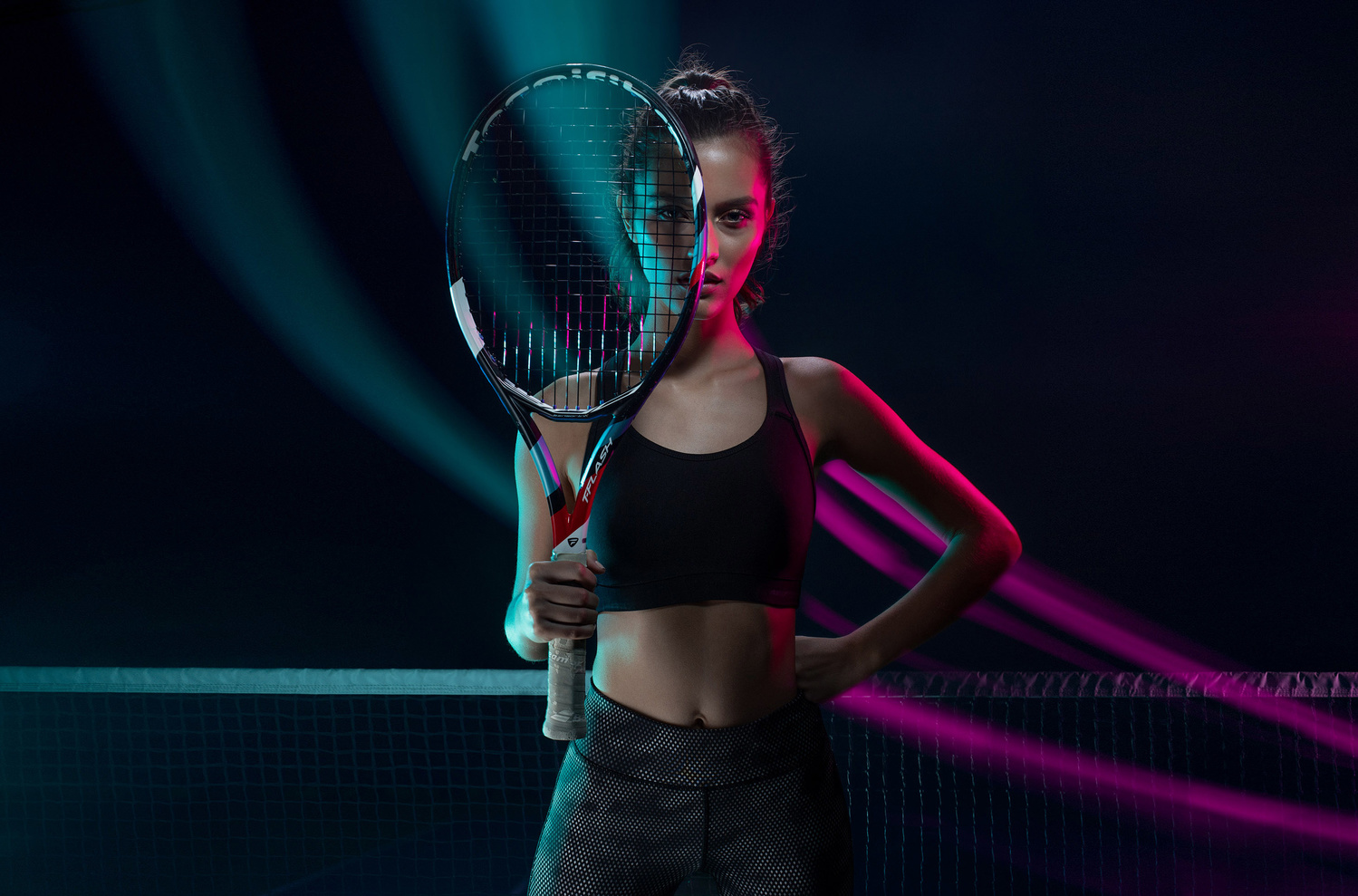 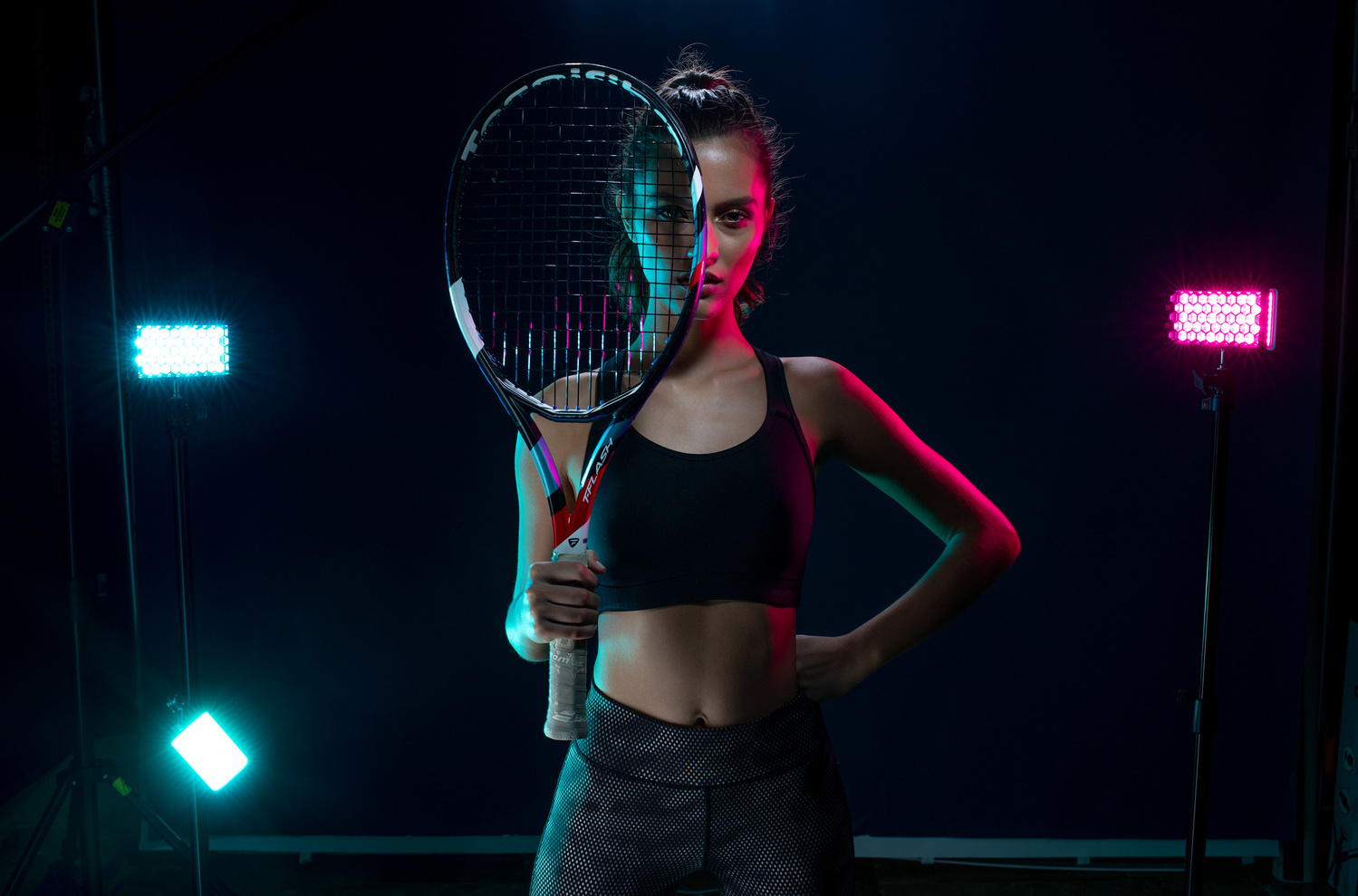 As you can see in the before and after images above, the strobe lighting setup is a bit more complex but still very common among studio photographers. Once I had captured a handful of images with the strobes firing and the LED lights adding some color, it was time to composite in the motion elements into the background. These motion swooshes were created by twirling one of my LED lights on a string and playing around with a much longer 8-second exposure. As you can see in the video above, the process isn't difficult, but it does require some planning and some intermediate-level masking.

If shooting with strobes intimidates you, don't worry, you can still create compelling images like this with just constant lights. While you might not be able to create the ghosting effect perfectly in camera, you can do some other cool things, like shooting wide open to create those super-shallow depth of field portraits. Lenses like the Tamron 35mm f/1.4 are perfect for achieving this sharp-but-blurry effect. Unlike something like the 85mm f/1.8 lens, the 35mm is also a bit easier to use indoors in limited space, especially if you want to shoot 3/4-length shots or show off more of your surroundings. 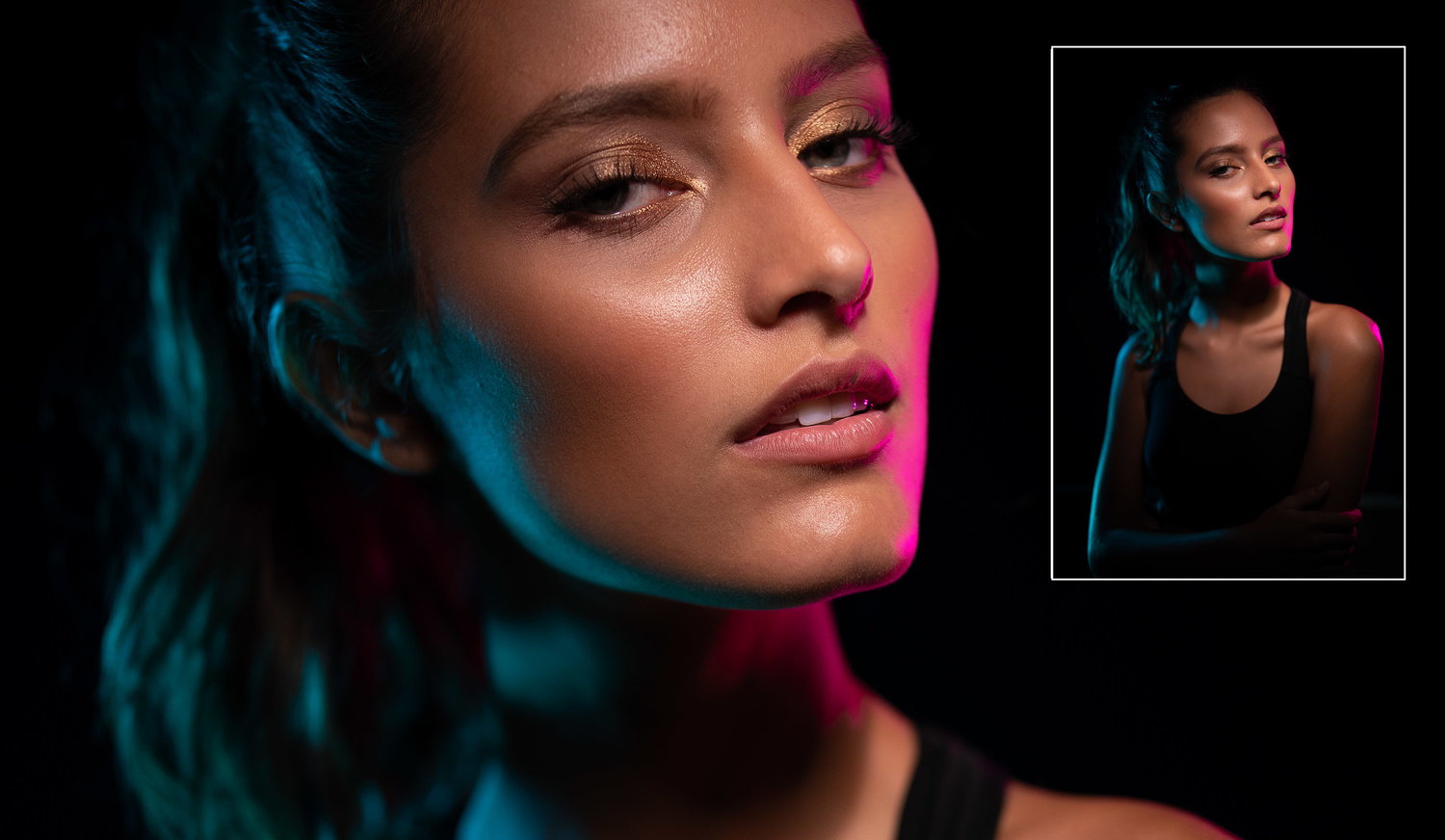 As I mentioned in the video above, I typically prefer using zoom lenses over primes. The lens that stays on my camera the most is actually the Tamron 24-70 f/2.8 G2 zoom lens, but I have to say, the sharpness of this new lens is pretty phenomenal. If you want a smaller lens that still gives you that classic field of view we've come to love in photojournalism and portraiture, the Tamron 35mm lens is definitely worth checking out.

I really hope the blue and red/magenta light fad passes soon. I've seen it a lot lately. Awful colours to work with. Even Rimac used them on what would have been some lovely car images recently.
That said, I like the movement created here, just the colours frazzle my brain.

Why do you think they are awful colors to work with? I like the color scheme, maybe even more than the cyan/orange scheme used so heavily in movie posters.

I think the color scheme is awesome. More please!!!

Typically the cyan / orange movie thing is done well though. Not gaudy nasty clashy like this: it’s a fad, like selective colouring was and like love edge epoxy filled table tops are in the wood working world.

Great way to get some movement into static and detailed shots. I did a similar thing a few weeks ago with my Boling P1 and a flash doing split lighting on the face and dripling some water on/in front of the model. The falling drops give a nice coloured streak through the image while the flash keeps all the sharp details on the brighter side of the face.

Thank you for the video!
I think the second set came out way better than the first. Don't think the red dress works so well with blue and orange. The sports clothes are perfect, especially the interesting pattern/texture on the pants.