Tips For A Successful Road Trip While Balancing Family And Photography

Lars Schneider, an adventure and landscape photographer from Germany, spent two months on the road with his family traveling across the Southwestern US. This video documents his trip, but I also interviewed Lars about the challenges and rewards of running a photography business on the road, while at the same time taking care of a family.

Some readers may recall that last year I posted a short article and video about Lars that gave you a glimpse into the work he was doing. I've included that video below.

One of the first things I asked Lars about was how he stayed motivated. On such a long journey with lots of responsibilities that had nothing to do with photography, it is difficult for some to be driven enough to keep making images amidst the rigors of the day.

It was more that I had to force myself not to have the camera in front of my face all the time, to personally enjoy this trip with my family as well. From many people we heard that our project and the film inspired them and somehow the same worked for me. The freedom being on the road, having my two favorite people around, the special bus and the beautiful landscape everywhere was all the inspiration I needed. 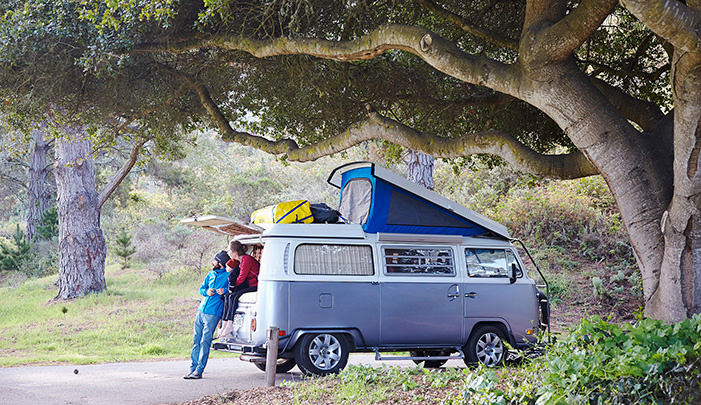 Coming up with a plan, dealing with logistics, and making a trip successful can be an enormous challenge. Lars told me that for his trip, it was vital that he and his family planned it during the "off-season" for tourism.

Plan for more time than you would think you need, and use the shoulder seasons for traveling whenever possible. The parks and campgrounds are so full during the peak seasons and on weekends, it can be a big hassle. Take your time, rather visit less spots than more and avoid the peak seasons and public holidays.

The trip itself was purely the idea of Lars and not a project assigned by a client. He felt that since there wasn't any outside pressue to produce something specific, he could focus on other creative ideas. These included shooting for stock, magazine stories, and of course making the video featured above.

During this trip we had the chance to shoot a lot of lifestyle related images in combination with the 1971 VW camper van and active family images. It seems like there is not a lot of high quality images out there of families/kids being active outdoors, hiking, camping, etc. or even just travelling, so those were the topics we shot a lot. One the other hand I went out by myself, usually early in the mornings, when Katrin and Fietje were still sleeping, to capture the landscapes in medium format. 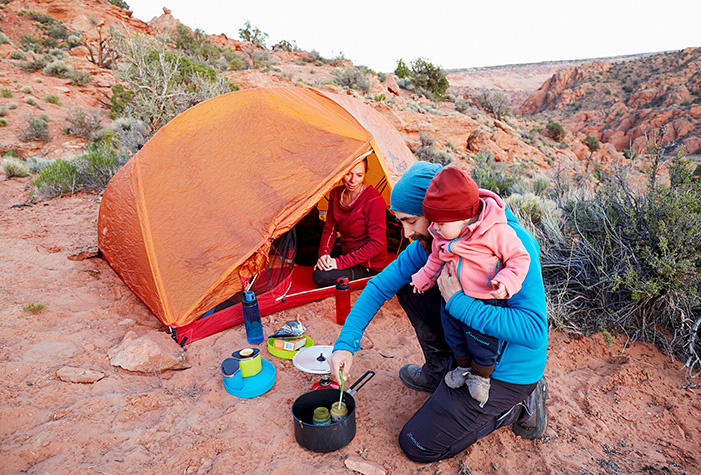 Being on the road all the time means you can stay disconnected, or go out of your way and keep up to speed with social media, emails, etc. Lars and his family decided that in order to make this trip not interfere with running a business, staying in touch was something they did almost every day.

We had to keep our business running, taking care of stock requests, answer e-mails, etc. When we arrived in the US, we bought a local simcard for our phone and used that or our laptop via personal or public hotspots to access wifi.

What about gear though? Cameras and laptops have batteries, and charging from an old VW cigarette plug was likely not always the most efficient option. Lars told me about not just the gear that he did bring, but what he plans to invest in for his next trip.

We luckily had a second battery plus an inverter for charging the computer, phone and camera batteries. But when you are on the road for a longer time and park the van in one place for too long, sooner or later the battery dies. We had to stay in hotels twice during the two months and use restaurants or cafés whenever possible to charge batteries. For the next trip we definitely want to install a solar powered charging system... 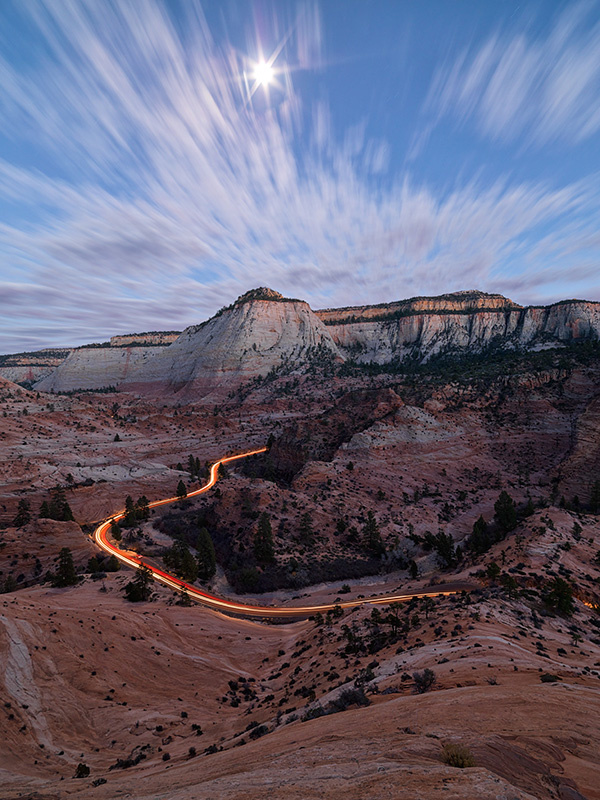 So he's got the gear, the motivation, and a sweet VW van. I aksed Lars how he manages to spend time with his family but still create images, video clips for the documentary, and even stock images of himself with his family? It turns out that his secret weapon is actually his wife, Katrin.

Without Katrin, I couldn't have done this or ever get this far in my profession. She has been my partner almost since the beginning and even though she is not a photographer, she helps my photography and in this regard the filming in many ways. First of all in her understanding of my job and what it means and needs to produce good images. She took more care of Fietje to give me time to shoot and she helps with ideas and planning and execution of our stock photography when we are on the road together. And when it makes sense, that I am in the photos, she does become the photographer as well.

On the one hand it is not always easy to work together as well, when you are a couple, but on the other hand it is one of the greatest things if you arrange your life in this way. 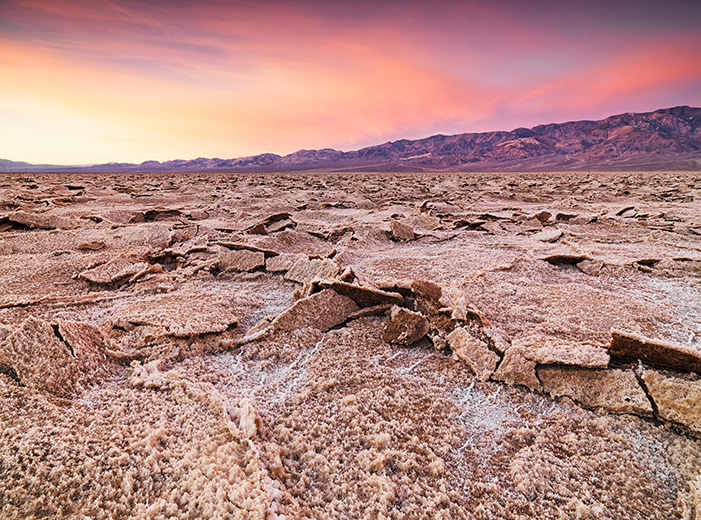 Besides his wife Katrin, their 8-month old son Fietje was along for the ride as well. You can see in the video how Lars and Katrin had to accomodate the sleeping and feeding habits of Fietje, but what you don't see in the video is Lars jumping in and out of the moving van in order to get shots of it driving along the road.

Driving in the first place was almost only possible when Fietje was asleep. So when there was a nice spot, we had to stop the bus (with a loudly running motor), with one of us jumping out to film and the other driving in circles past the camera, followed by a drive-by-jump-in. Pretty stressful at times. 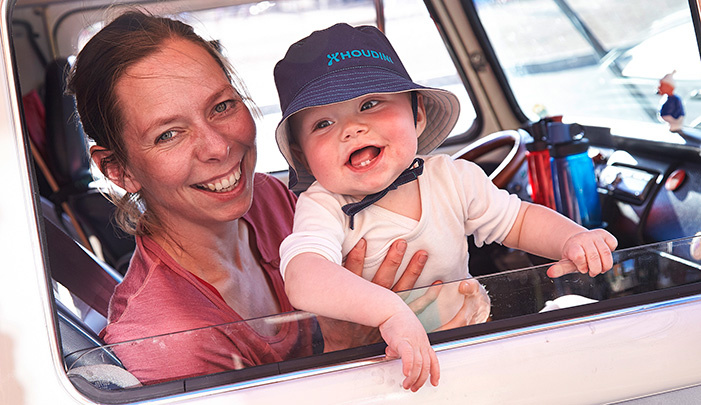 When not getting images of the van, Lars and his family would hike into parks and recreation areas. Carrying photography and video gear can get heavy, but adding a small child in to the mix creates a whole other obstacle. Lars shared with me that this was in fact the most tricky part of making the entire film– to capture himself with his family.

It meant to take a tripod along and to set it up somewhere along the trail, run back, hike past it and do it over again from different perspectives and at different spots, to make the story work. Having Fietje in the baby carrier at the same time, didn't really make things easier. He enjoyed it up there a lot but whenever we stopped somewhere for too long, he got grumpy quickly. 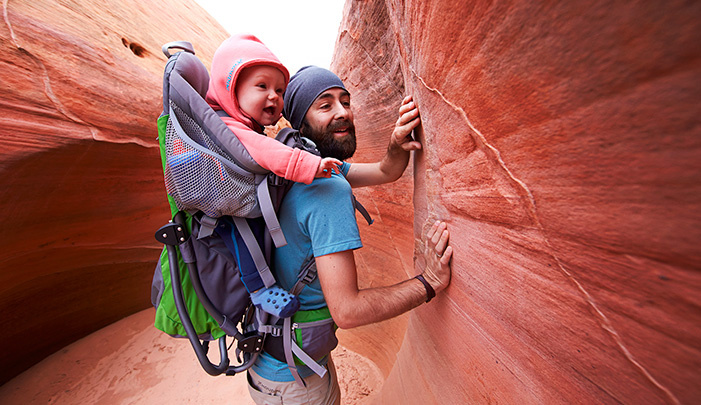 Having purchased the VW van in California, Lars' ultimate goal is to make it all the way to the east coast, in sections over the next 5 years or so. He plans to return once every year for a few months, making it a bit further east each time, and hopefully finding a place to store the van in between visits. Lars is already planning the next leg of the journey, but is still undecided as to whether not he wants to travel up to the Northwest, or venture further into the desert canyons of Utah and beyond.

We just love the coast so are very much looking forward to spending some weeks touring north through Northern California, Oregon and Washington. And I must admit, I am sometimes a bit afraid, we'll somehow never make it too far east, as the coast seems to have this magnetic force that always draws us back... 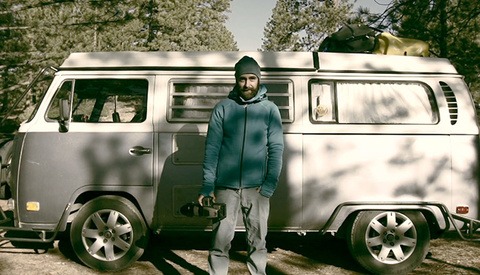 That's an "Incredible Journey"! I love the commentary from the kid's perspective. One of these days, I want to take a cross-country tour of the US.

Would love to do something like this!!! so awesome!

Lovely video and what a great family! Feeling inspired!

Very inspiring, I love this.