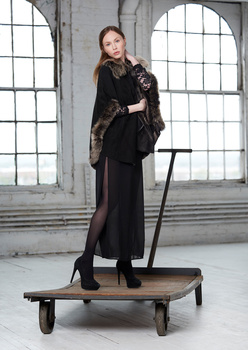 This year I have moved back into a studio that I had worked in about 10 years ago. The studio is in the corner of a upper floor of a million square foot factory that was built in 1880. Many of the original industrial features are still present like the riveted steel columns that are stamped with Carnegie and the somewhat archaic horizontal pipes for heating.

I've spent the past couple of months getting the studio ready for shoots again. It will never be a pristine loft like a Soho studio or gallery, but I am fine with that. Here I pulled in a somewhat old fashioned pallet dolly for the model to stand on. I have 7 large windows facing west so the space is abundantly filled with light on sunny days. This day was mostly grey and overcast but there was still enough light to shoot with.

Natural light fills the background and the model was lit with large softbox behind the camera. Unfortunately my time was limited on this shoot and I couldn't explore more nuance to the lighting. I am happy with the results to show the feeling of the space and I liked the monochrome nature of the fashions and studio.