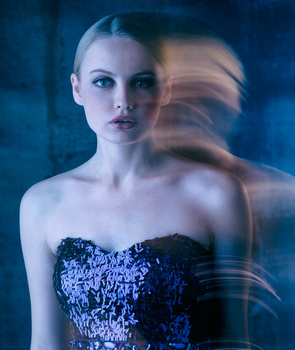 Fashion shot of model wearing shiny evening dress with in-camera motion blur created by using both a strobe for main light (camera left) and a tungsten hot light as a separation light (camera right). I both dragged the shutter to 1/8th of a second and shot while intentionally panning my camera.

This shot was a result of several attempts. While the amount of blur is somewhat controllable, the shapes it creates and the exact position it hold is the frame can be unpredictable. I set up this shot as a demonstration of mixing strobe and constant light at a fashion photography workshop I held at my studio.

The effect can also be created with subject motion or both camera and subject motion. In this case I was using standard front curtain sync which fires the strobe at the opening of the shutter and the blur comes after the strobe fire. Rear curtain sync can also be useful, but you have to plan which direction the motion will happen. In this case since I had the control of a studio situation, I kept camera on standard sync and directed the motion to not over power the fixed model image created by the strobe.