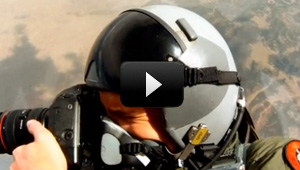 This has to be one of the most awesome opportunities that could be granted to a photographer. Last fall, Ed Darack was asked to shoot a cover for The Smithsonian's Air & Space Magazine, and decided to show the world how he did it.

Due to the exorbitant cost of making everything happen (according to my research, that's about $6,000 per hour for each F-16, and that's probably way on the low side) and the difficulty factor (it's not often that you're granted a handful of $20 million planes to take pictures of), missing the shot was just not an option. To make sure everything went off without a hitch, Darack took the vision in his head and modeled it on a computer in a 3d CAD program, and showed it to the pilots. This helped to give everyone an idea of what they were attempting before they went up in the air.

After a brief "lesson" on ejection and what to do if something fails at 500mph and 15,000 feet (pray?), Ed set off on his journey to photograph F-16s in flight for Air & Space Magazine.

One last note: don't forget to take into consideration how heavy his camera becomes inside a plane like this due to G-forces. Climbs of 5Gs are not uncommon in a fighter jet, and a five pound camera setup (1d Mark III and 24-70) quickly turns into twenty five. That's before we add in the rolls and disorientation that results.

And you thought your camera was heavy!

Not to impressed with the final cover... I can see it must have been difficult to get the shot at such an angle only being able to move a little in the harness... but still the image they picked seems "boring" compared to the couple they showed before. If anything I might have photoshoped the planes slightly closer together...  I wold have died to get the opportunity to do this.

A 3D CAD model seems like overkill.  Maybe there's something I'm missing, but wouldn't a simple sketch have been sufficient?

You know why you shouldn't shoot at F16? Because it might shoot back.

Getting the opportunity to go up in those jets and take shots, that's just awesome. Timing on a shot going at those speeds takes on a whole new meaning.