Fstoppers Review Of The Descent Shoulder Bag By Mountainsmith

I’ve been shooting stills and video alongside the rest of the crew with Clear & Cold Cinema, while working on the Michigan Ice Film. Before I departed sunny Colorado, I was lucky enough to get my hands on a Mountainsmith Descent Pack, and I don’t know what I would have done without it.

In 2013, Mountainsmith got on board with reknowned photographyer Andy Mann, and together they designed an entire line of camera packs for field work. The entire lineup of gear can be seen here, but for this review I’ll be focusing on the Descent, a shoulder sling pack. To test it out, I brought it along for 2 weeks of shooting footage with Clear & Cold Cinema for the Michigan Ice Film project. Below is a teaser trailer of the film, edited from footage captured last year for this project.

My role was get close up video and stills of the action, which meant I’d be dangling from a rope several hundred feet off the ground, in an attempt to capture visuals from a unique and striking angle. Simply keeping the camera steady is a challenge by itself- but I had to work in freezing temperatures and manage several camera bodies and lenses without dropping anything. Cold hands and off-balance positions can make this a challenge.

So enough about what I was doing, let’s get to the pack! The Mountainsmith Descent was small enough to easily stow in a large hiking pack, but large enough to fit 2 compact cameras with 3-4 lenses, cards, and a couple batteries for each body. My kit specifically included the following:

This is quite the load for a shoulder bag, but it is very deep! With some creative positioning I was able to fit all of the above and just barely close it up. It would fit better with one or two less lenses, but two bodies each with a lens and a few small accessories would easily fit in this thing.

Top and side handles are found around the outside, and a few stitched gear loops exist as well. A buckle is an option too, so you can click the pack around your chest to the shoulder strap for long carries. 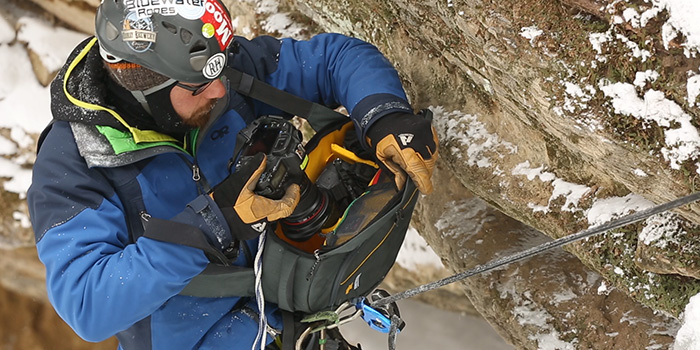 The bag isn’t flimsy, but it also doesn’t feel like your dragging around a hard case. It only weighs about 2 pounds when empty. The material is water resistant and after 4-5 days of winter hiking, climbing, and shooting, the bag looked as good as new. I liked that.

The main compartment has removable dividers for creating a fit custom to what you plan on carrying in it. This works in tandem with the shoulder sling style, whereby you swing the bag from your back to your chest, and with a quick zip you now have protected access to your camera (more on this later.)

There is a small zippered compartment on the backside, which is a bit flat but could store extra cards, keys, a wallet, map, or other small essentials. I stashed a couple spare carabiners in here during my climbing shoots.

I didn’t realize it at first, but there is even a small raincover tucked into a hidden pocket on this as well. I was working in snow conditions that weren’t too wet, so I luckily never needed it, but easily could have if the conditions changed.

One small thing that spoke volumes to me though were the color coded mesh pockets on the underside of the lid. One red and one green, perfect for separating dead batteries and used memory cards. When you’re on the trail and switching cards and batteries around, this makes it easy to stay organized. 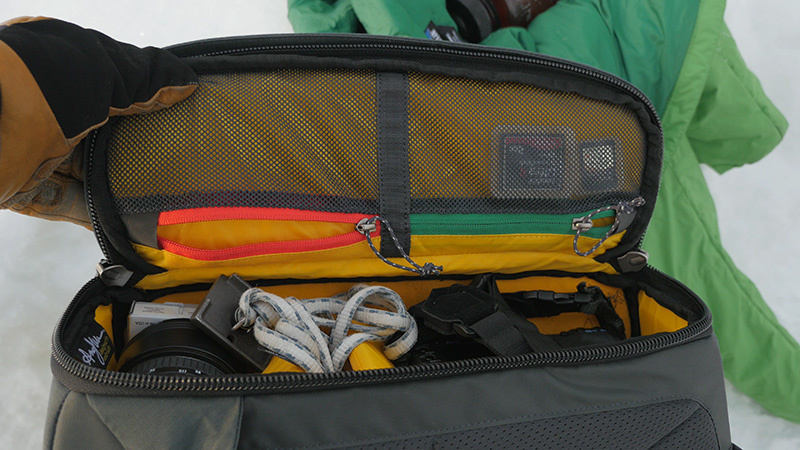 What is it good for?

This is a great pack for a day hike where your needs are minimal, outside of a camrea kit. You could easily stash a water and some snacks inside of it, alongside a full size DSLR and lens.

I found that this pack was INVALUABLE for the particular kind of work I was doing. Even as I sit in my hotel room writing this, I don’t know exactly how I would have managed both video and still camera bodies, and lens switching, with any other pack, while hanging from a rope in the blowing snow. I was able to tighten the pack to my body while rappelling down to my position, and then once I was secure, I could simply swing the pack to my front side and access it immediately. 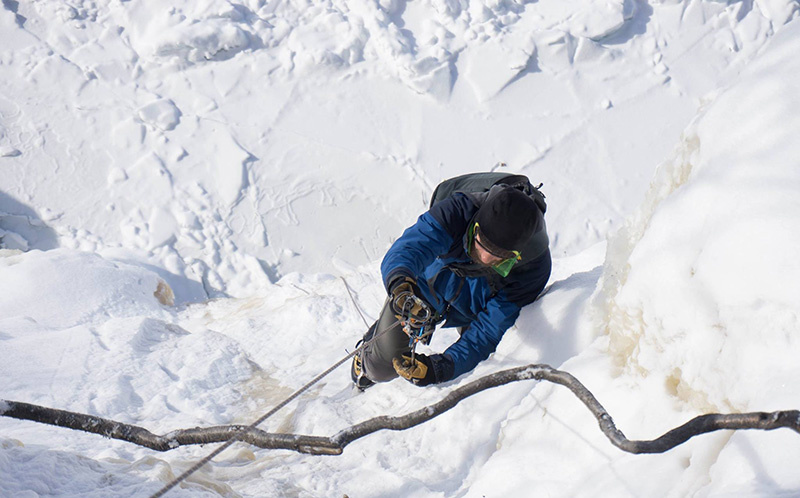 With a shoulder style bag like the Descent, it meant that I could go from hauling to using without actually taking it off. While hanging in the air this is crucial, since dropping gear, or even the entire bag is a very real possibility. I kept some slings and carabiner handy to clip the pack onto my harness, as a backup, just in case it managed to slip off. It never did.

Quickly shooting some video, placing that body back into the Descent and then pulling out my stills camera was quick and easy- just what I needed it to be. The athletes I’m shooting don’t want to hang out and wait for me, and I’m working my own body trying to maintain a steady stance against ice or rock.

I hiked, rode a snowmobile, and even snowshoed with just this pack on, and it fit just fine for all of those activities as well- the only reason I stashed it inside of another larger pack was because on some days I needed climbing gear, ropes, and more. 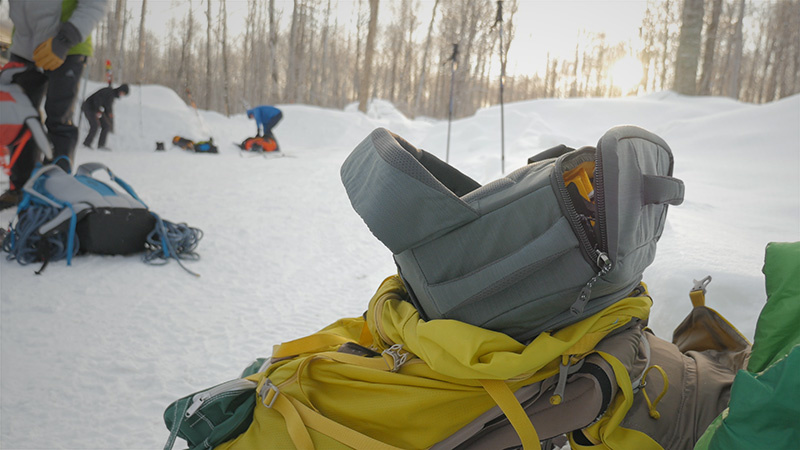 The only negative thought I've had about this pack is something that I feel is unavoidable– while hiking with it over my shoulder, I got sweaty where the bag contacted my body. I typically hike with large, expensive packs that have specifically built venting capabilities, which I don't think are possible for shoulder bags.

I wish it came in black!

It’s priced at $90 on B&H as of the time this article was written, and I feel that’s a pretty competitive price for a well-built shoulder camera pack. If you’re seriously getting into climbing video or photography, I would highly recommend this bag.

Big thanks to Dan Englund for the stills and video clips of me using this pack!

Great question! I'm traveling and don't have a 70-200 with me at the moment to check for 100% certainty, but I believe it could fit if placed sideways in the bag (not with the lens facing down.)