So outrageous are the looks of the L16 camera, you might find yourself checking today's date to make sure we haven't entered into April. But no, this is completely real. Light, the company behind the L16 camera, took a compact body and crammed 16 cameras, each with its own plastic-covered lens, into it. The idea is to create an all-in-one camera with multiple focal lengths, allowing the L16 to use computational photography to combine resulting images for higher quality photos from an aggregation of photos taken with small sensors.

This isn't just a proof-of-concept; you can reserve a pre-order for one through November 6th for $1,299, after which the price goes up to $1,699. Still, $1,300 for what amounts to a touchscreen-controlled camera with a few small sensors sounds steep. However, the results are rather promising. Yes, Light does want this to replace your DSLR, but no, it won't just yet (but then again, maybe it could... it's an impressive little thing).

Each lens of the L16 has its own 13-megapixel sensor behind it. There are five units at 35mm, five units at 70mm, and six units at 150mm, making the entire unit flexible enough to cover a range of subjects. But there's quite a bit going on behind the scenes.

The L16 captures images at any range from 35mm to 150mm. To do so, it captures ten 13-megapixel images with a selection of ten of its lens-sensor units (which ten depends on your settings) and combines the data to create a rather large 52-megapixel image. The L16 uses some of the data to expand the number of pixels in the image, while it uses other data to increase performance in areas such as dynamic range, noise, sharpness, etc. Even things like focus and depth of field can be adjusted after the image is taken, similar to cameras by Lytro.

The Verge got their hands on an L16 and said its images "weren't as punchy as ones of the same scenes shot by a Canon 5D Mark III," but that "there was just as much, if not more detail in the L16's images."

Considering the entire camera is more the shape of your smartphone, including its five-inch display, that sounds quite promising. If this is just the prototype, we just might see all professional photographers with tiny black boxes in a not-so-distant future.

I'll order it when I can make phone calls and use android OS on it. Thanks!

And that camera suddenly gave me a goosebumps reminding me of the lotus seed pods commonly edited this way.... 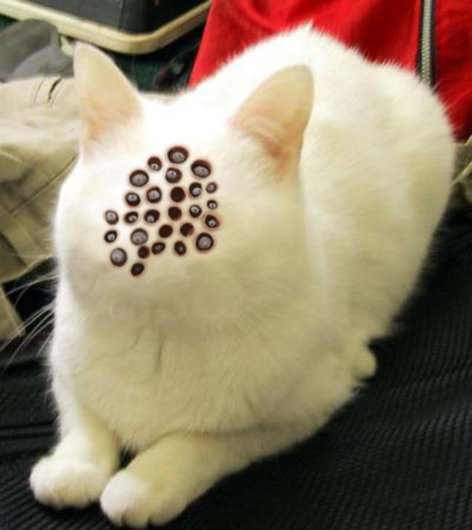 Makes me curious if their product and marketing images were taken with their camera...

I'm totally willing to admit that I have a hard time wrapping my head around this camera.

Another nail in the coffin for the camera industry, especially once this concept is miniaturized and incorporated into cellphones.

Love the concept, I hope it's really as good as they make it out to be.

I think i will take the risk and order one, it sounds promising and in theory the dynamic range should be great

Here we go with the MO' PIXELS marketing scheme.

Anyone see what I see?

Every photo they show is totally sand-blasted with Luminance noise.

That white dusting of noise that robs the image of contrast, looks like powdered sugar sprinkled in the shadows.

If they would post the full size raw files so we could download them, I suspect we would also see Chrominance noise, those red speckled artifacts we see in the shadows as well.

Problem is, until there is a sensor which an entirely new processor, pouring 52 million pixels onto an FX or smaller sensor means those photo-receptors have to be so small, so inefficient, so ineffective at capturing light, the electronic gain has to be turned up to NULL the exposure and chroma signal.

The difference between a Fender blues amp and a Marshall Amp with the gain turned up, mellow vs heavy metal... with the same outcome... NOISE! EXCESSIVE NOISE!

As Nikon found out, which is why their flag ship Pro Camera is the D4s with only 16 million pixels on an FX sensor.

There is a WALL, where number of pixels on a given sensor size with a specific processor is maxed out.

Just add pixels... same sensor size, same processor, you start to diminish the quality of the image. You get more resolution, which is dots per square inch, but when you enlarge those dots, they are less quality dots than those of a smaller pixel count, in which the pixels are bigger, better at gathering light and more effective.

Why is the D810 with 36 mp on an FX sensor with the Expeed 4 processor NOT the flagship of Nikon pro cams? Because Nikon knows, as I know, once you go above 16 mp on an FX sensor using the same Expeed 4 processor, the pixels are less efficient, less effective, the electronic gain has to be cranked up to make them NULL and in doing so... both Luminance and Chrominance noise becomes unmanageable.

So, though the concept of this LIGHT L16 Camera is unique, something that many of us would LOVE to be a REALITY instead of another MO' PIXEL, SMALLER CAMERA sales pitch, unless it has some MIRACLE processor everyone is dead quiet about, the camera is going to be NOISY at a level many, including me would find unmanageable.

I WOULD ORDER TWO OF THEM TOMORROW IF THEY WERE IN THE NEIGHBORHOOD OF 16 MP, but announcing they are 52 MP leads me to believe, well... I am not going to order a 52 MP camera from ANY manufacturer until they show me they have produced a LARGER than FX sensor or a processor better than Nikon's Expeed 4, which is currently the best for an FX sensor... or both.

Going into some of the locations I go with $12,000 worth of Nikons hanging off me is like CHUM in water churning with Great Whites, so I would welcome a camera like this if the performance level was there.

There are many times when such a camera is not only a good idea, but could save your life.

I had such an incident in New Orleans a few months ago, where I wished I did not have the D810 and 70-200mm f2.8 around my neck, but the mere boasting of the 52 mp tells me this is the IDEA, but just not the camera for me.

More explanation of the sensor system, how big, how many pixels is each camera as they call them projecting onto the sensor or sensors?

Tell me the relative sensor area and the pixel size covering that area are the same size/pixel count as the Nikon D4s and then I might consider this as a professional quality camera.

I think there's something to be said for the fact that it's not 52 megapixels on one sensor. Granted, I have no idea what the effective square area is for the ten sensors that capture 13 megapixels and add them together in some way to finally come out with 52. But that's what it is...so I imagine it's quite a bit better than what 52 megapixels on a smaller-than-FX sensor would be... Better than 52 megapixels on an FX sensor...??? Stand by for more details. More news is on the way, indeed. :-)

Indeed, I think I mentioned it somewhere in one of my posts on this topic, that if each camera as they are calling them has a smaller number of LARGER pixels, then those multiple cameras are creating what may be effectively a mosaic of clusters on a sensor, giving LARGER receptors and more of them creating effectively a larger sensor area, then you would have more pixels that are larger, more efficient and produce a larger dot per inch count with less noise. That would be the ideal in this type of situation.