After 17 years in the video game industry, Bert McLendon decided to change things up and become a full time portrait photographer. For the past few years he shot many interesting people and families in the studio and had great local success in Austin Texas. Earlier this year Bert decided to try a fun experiment in his spare time, and the result went viral. Check out his great and unique Caricature portraits and learn how he's creating them.

Caricature portraits are something we all know from street artists in major cities around the world. They convince tourists to sit down for a 10-minute drawing session, which usually results in exaggerated and funny drawn portraits. In the photography world, this type of look is not as common and not too many photographers attempt them. This is where Bert comes in. 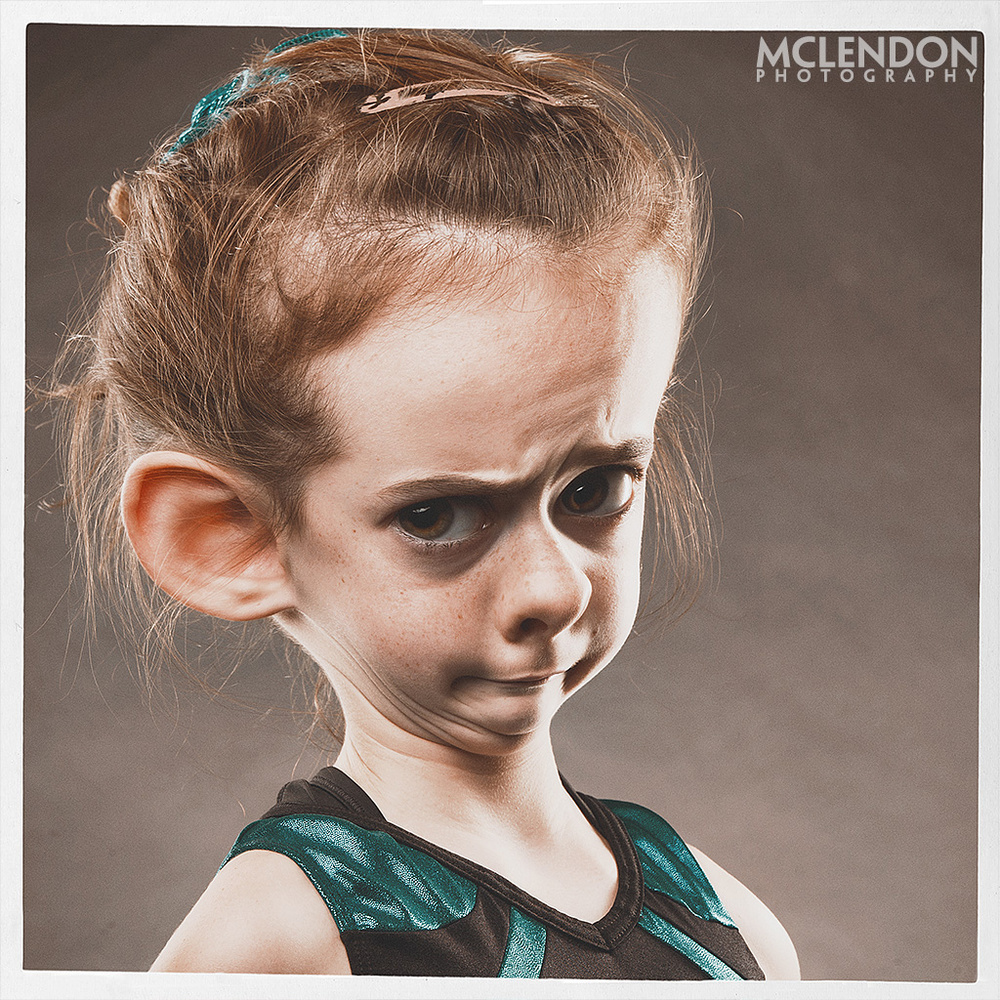 FS: How did you get into this type of photography/retouching? how long have you been doing this?

BM: "It's only been a few months really.  My amazingly supportive wife and step-kids went on a mini vacation up near Dallas for a few days in June while I stayed home for a few shoots, one being a headshot session the next day. This particular client wanted a lighting setup that I don't normally do for headshots so I set it up and practiced on myself. While standing in as a subject I was trying to make the most hideous faces I could think of. The result was about 50 images of me looking like a complete idiot. I had distorted some clients faces for the kids a few times and they got a huge kick out of watching me "liquify" their faces. I thought these new test shots would be good to distort and send them to my family with little messages like "I miss you guys". I texted them the images and they fell in love with them. I think I initially did around 20 of them when my wife mentioned I should post them to Facebook. I was a little hesitant to post them at first because of the cheese factor, but ended up finally posting them and did not expect the reaction. People who have never commented or liked on any of my photos were commenting and liking them. They were the most successful photo posts I've ever had on facebook and I thought it was just plain strange. On July 4th we were out watching a fireworks display in the neighborhood and my wife had brought up the caricatures. Someone in the group saw them and said "you gotta post those to Reddit!". Later the next day I posted them to Reddit and they got close to 300,000 views. Again, I was completely blown away that people reacted the way they did." 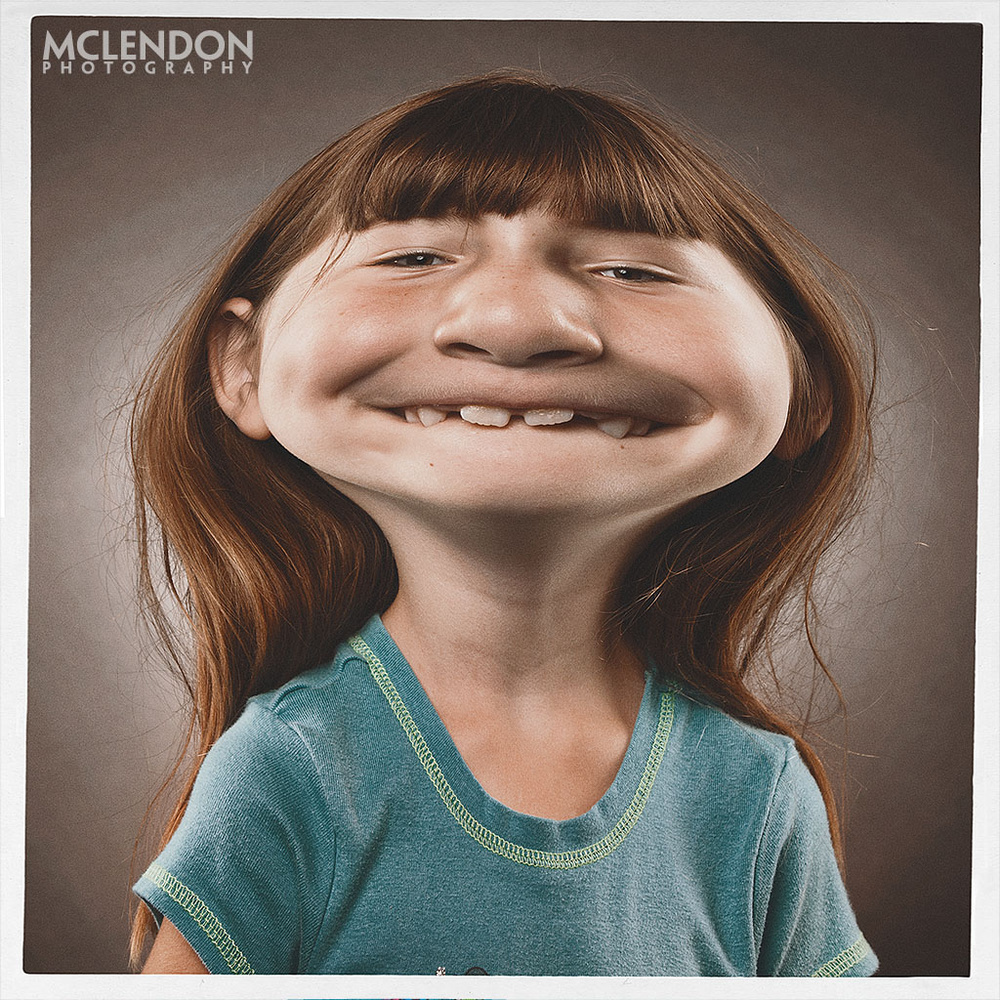 FS: Do you still do it just for fun as a personal project, or do you do it as a paid job for different clients?

BM: "Well it certainly started out just for fun but the response was so awesome that I questioned whether or not it could be a viable avenue for income within my business. I continued to do them during my free time with family and friends in order to practice the technique and build up a small portfolio. I did my first live event at an event planners happy hour about a month after starting these and the response was awesome. There is nothing like distorting a persons face who is standing right in front of you watching you do it.  I looked up at one lady watching me edit her face and I said "sorry!"  They were all laughing at themselves and were really intrigued by the process which was good. I've yet to have someone say "Hey!  that's not very nice, I don't look like a thumb!" I'm actually coming up with a humor related model release that sort of tells people to drop their dignity and have a sense of humor about it while still covering me with commercial use of the images.  "I  ______ hereby understand that this is just for fun and I will not phone my lawyer for any reason etc..." Since then I've done some family sessions for the Christmas cards with this style and have booked a few events doing this.  I think it's a great alternative for corporate Christmas parties and events. People who have booked it so far have been looking for "something new." Although this has been done since the beginning of Photoshop, I'm hoping that my take on it is a little different than what others have done." 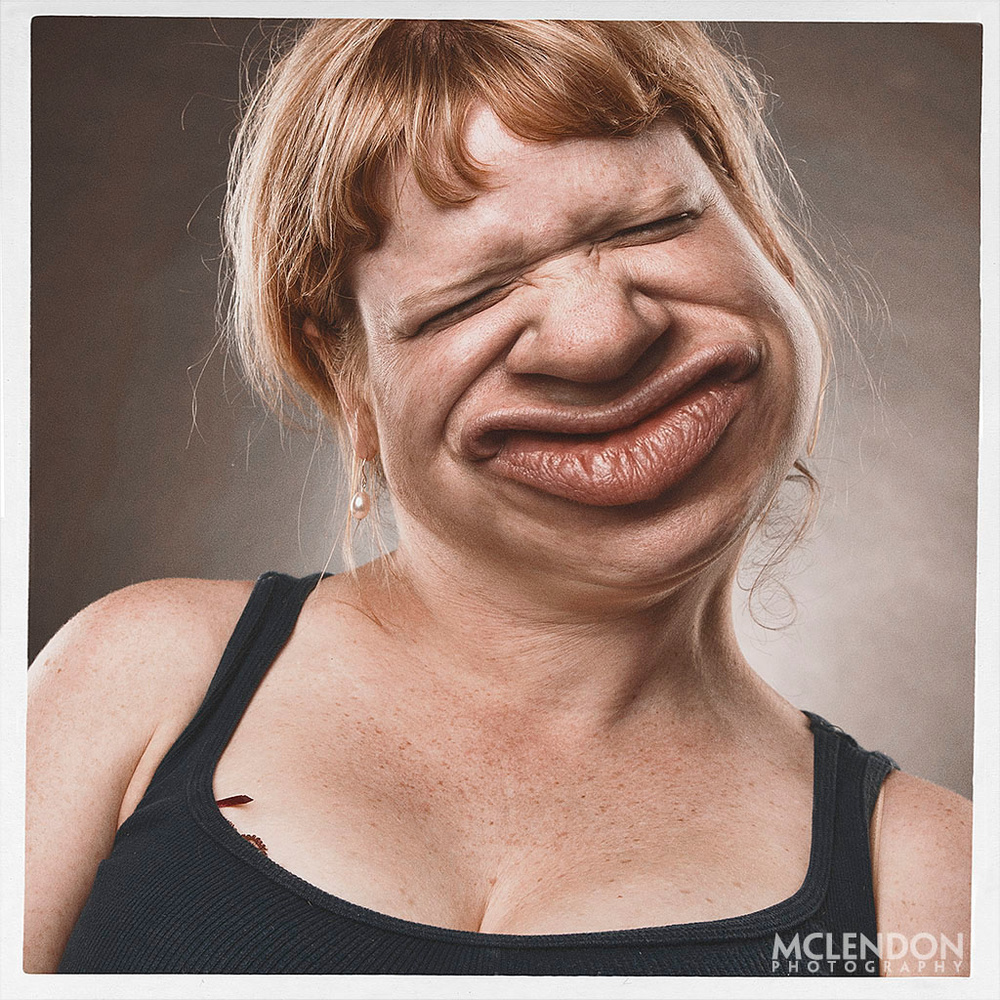 FS: How long it takes you to retouch an average photo this way?

BM: "The first few took around 15-20 minutes each. After deciding that I would start offering these to my clients as something different and especially for live events I had to get it down to something comparable to a traditional live Caricature Artist which is around 5 minutes.  After the basic liquifying is done I run a special Rad Lab Recipe on it for the overall illustrated look and then Alien Skin Exposure 6 for the border. I like the border because it gives a Garbage Pail Kids type trading card look to them (if you're old enough to remember those)." 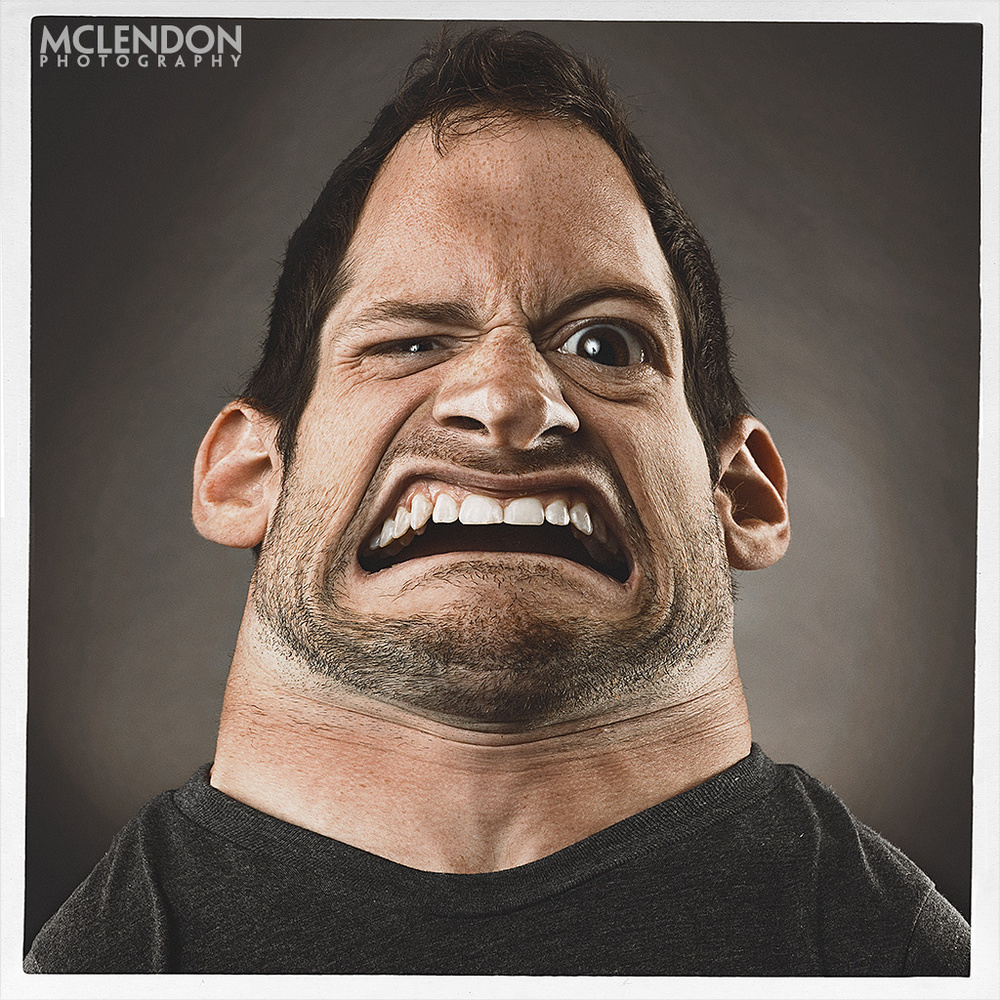 FS: All the photos seem to be very sharp and all the details look real, which is something that is almost impossible to achieve when stretching photos this way. what is your secret?

BM: "I think it's a combination of a few different things. While using liquify, I generally use really large brushes and avoid using small ones which will "smear" the pixels like the old kais powergoo used to do (another old test). Using large brushes and subtle brush strokes keeps the pixels spread out more evenly. The special sauce Rad Lab recipe adds some contrast and grain which I think gives a unified look to the images. Lastly, after resizing down to facebook/instagram/website etc... I use unsharp mask to bring out all the little details. It's actually over sharpened quite a bit because these definitely aren't "beauty" shots.  Unsharp Mask amount is around 120% at .5 pixel radius." 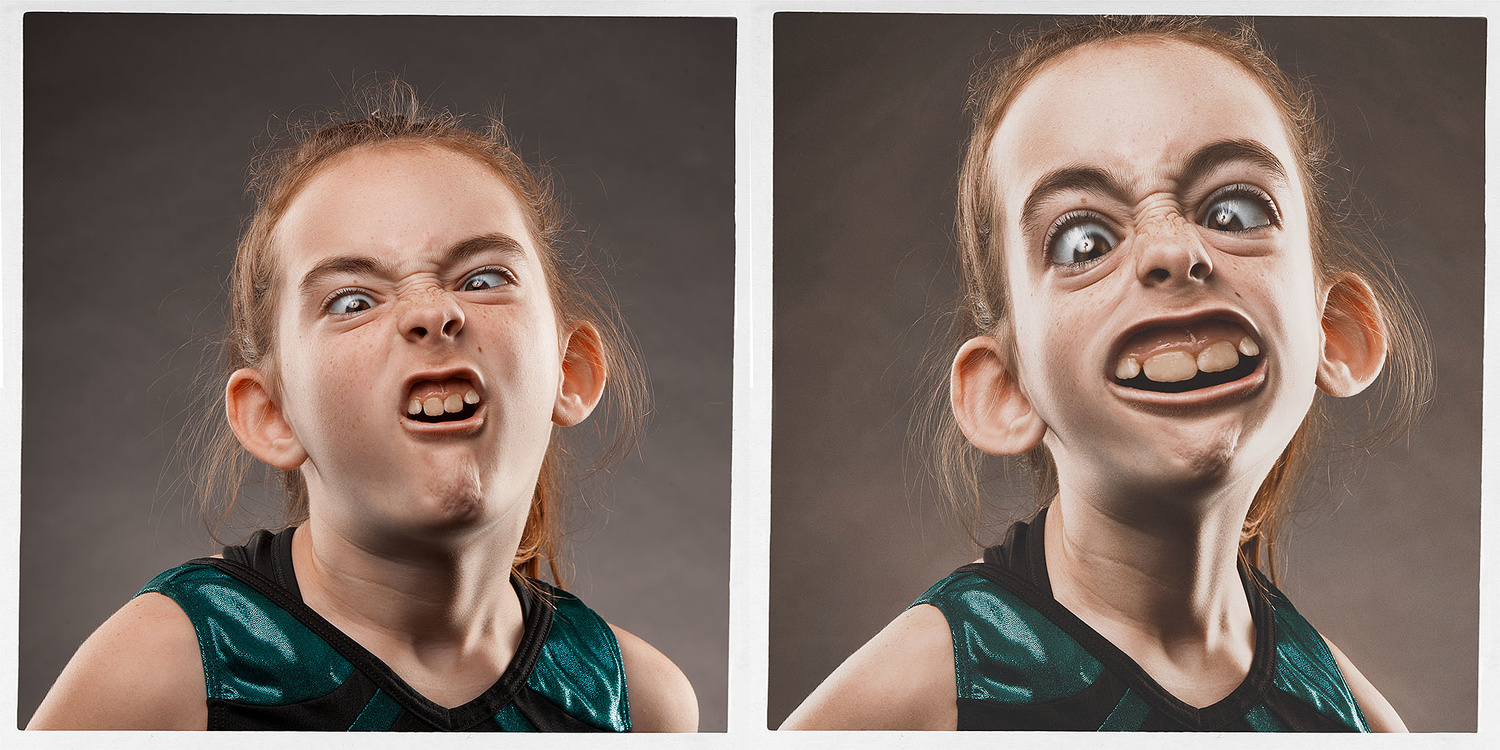 FS: Do you have to shoot the base photos in a specific way to help you achieve these results? what is your lighting setup and backdrop?

BM: "Yes, I've played around with some different lighting setups and some just work better than others. The most important parts, to me, are the rim lights. The main setup is 4 lights, 1 bg light, 2 rim lights on each side/behind the subject, and 1 main light.  I use black seamless paper as a background. Camera is set to a fairly small aperture like f11-f14 so that everything is as sharp as possible all the way through. I ask the subjects to really get into it and make some seriously ridiculous faces. The crazier they get the better the end result is." 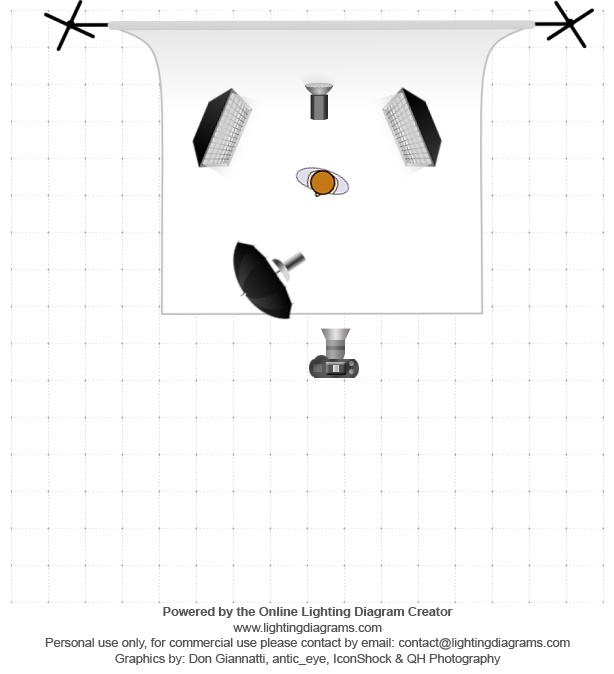 FS: What gear do you use to create these?

BM: "Most of these were shot with a Canon 5dii and the 70-200mm 2.8L is ii but I also shoot them with my Phase One 645DF/P65+ back with 120mm macro lens. The much higher pixel density helps me stretch things a little more without noticing. I actually prefer shooting it on the 5dii because it's just a much quicker system and allows me to snag a few shots when the subject isn't prepared."

FS: Any plans for the future with this series? book/gallery etc.

BM: "It would be awesome to put out a book of these accompanied by some funny/positive quotes. I'm pretty sure Fstoppers needs to get into book publishing starting today... with this idea. This is all about having fun and looking at the lighter side of things.  So far it has brought a lot of laughs to a lot of people." 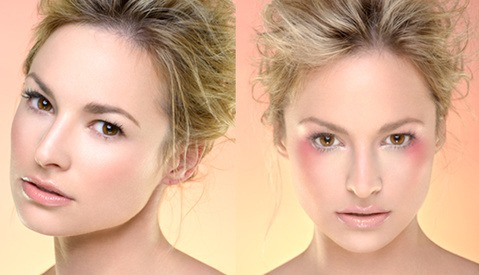 Composite / June 29, 2015
Creating Colorful Portrait Effects In Camera and In Photoshop
Log in or register to post comments
5 Comments

As I fellow Austinite I can say that Bert's caricature work has been pretty popular in town, and it's great to see it showcased here. Way to go, Bert!

Surely made my day, well done.

Bert is such a talented guy. One of the most important attributes of a photographer is his ability to make his clients feel comfortable - and in this case, make his clients comfortable enough to make a total ass out of themselves! He certainly has the ability to put everyone at ease. He is easy to work with - delivering simply FANTASTIC results.

Good to see his Bert's work showcased, and to see something different from your typical "beauty" work :)

If you like this sort of thing then you will love the stuff on this site 'Freaking News'
http://www.freakingnews.com/