Photographers Stop... And Have Some Fun!

Clients, deadlines, prints, taxes, insurance, equipment maintenance, paperwork... these are all responsibilities that can quickly fall on a full-time professional photographer's shoulders; the weight swiftly dragging you to the floor. Between trying to make a living and trying to be creative all at the same time, sometimes it's hard for us to just, 'stop and smell the roses', but it's important to. Let me tell you why.

I remember being on my high school yearbook's photography staff and always getting this small thrill in not knowing what I was going to capture that day on the Canon Rebel film SLRs we had back then. I would take pictures of the sports teams, students socializing in the hallways or any events that were being held at the moment. My yearbook teacher, Ms. Wilson, would be kind enough to let us take the cameras home on the weekends and would send us packing with a few rolls of B&W and color film that we rolled ourselves. She would tell us to go explore our world and see what we could catch through the lens. My best friend (who was also a photographer on the yearbook), Samantha, and I would do just that. We would walk around our neighborhoods together and take pictures of whatever caught our fancy. I look back at those pictures fondly and remember how much fun it was just to take pictures of whatever I wanted with no pressure and no responsibilities. That was fourteen years ago... 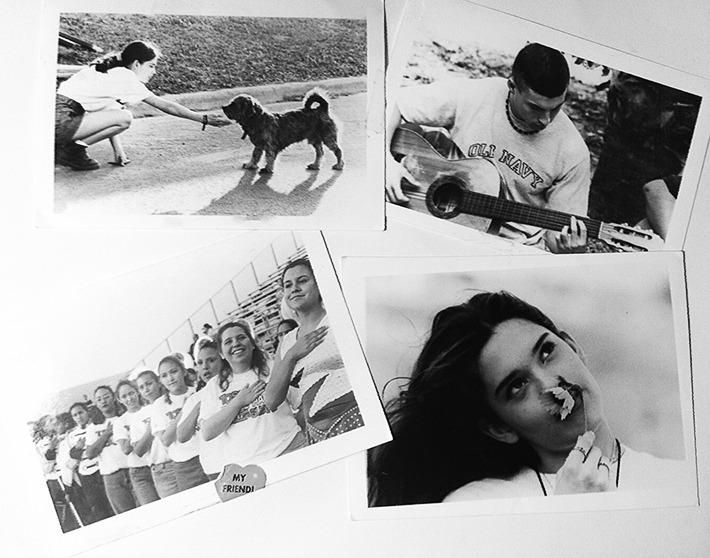 Now, as a full-time working photographer with an ad agency it seems that I never have the opportunity to truly capture whatever I want. Even my portfolio shoots are usually carefully orchestrated with pre-planned concepts and details for a targeted audience. Don't get me wrong, I love working at an ad agency. I have learned so much from shooting scenarios that I normally wouldn't have as a freelancer; like architecture for one, but once in a great while I feel like something is missing.

A few days ago I drove to South Padre Island, TX for an all day architectural shoot at several locations for a local decor magazine. The office manager for the magazine, Ed, accompanied me on the shoots. Things tend to go smoother with a representative for the client present. The last location that we shot was the new firehouse on the island which was pretty interesting all in itself, but as Ed was driving me back to my vehicle, (which was still parked at the previous location) when the shoot was finished; I gazed out my window and realized just how bright the stars were shining that night. It had been years since I have seen a sky so bright with a blanket of stars. I made an off-comment to Ed about how amazing the sky looked and how I really had an urge to try to photograph them, but that I had a long drive back home. He looked at me and the sound of my obvious disappointment and said, 'Well, why not... let's go.' Instantly my mood lifted and we picked up my personal camera from my car and looked for a place away from the island main strip to shoot away from any ambient light. 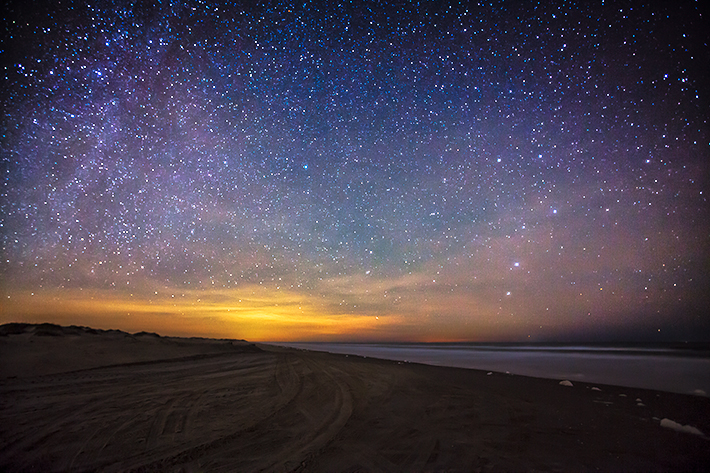 We found the last beach access that was several miles away from any artificial light, and preceded to get ready to take some images. As, I was setting up my trusty tripod, a few vehicles would stumble upon us and slowly drive past us, which made Ed nervous as we had heard there had been some suspicious activity at the beach after dark from the firemen earlier. After goofing off and teasing each other about the possibility of being chopped up by axe murders, we set out to attempt some celestial light-painting. I have done my fair share of light-painting before, but never on this scale. I didn't have the first clue about photographing stars, so I started with my basic settings and adjusted them from there. I first just wanted to try to get the stars by themselves, but as the minutes went by I realized that standing next to me was the perfect subject, and I easily convinced Ed to try some more conventional methods of light-painting while also attempting to capture the stars, as well. 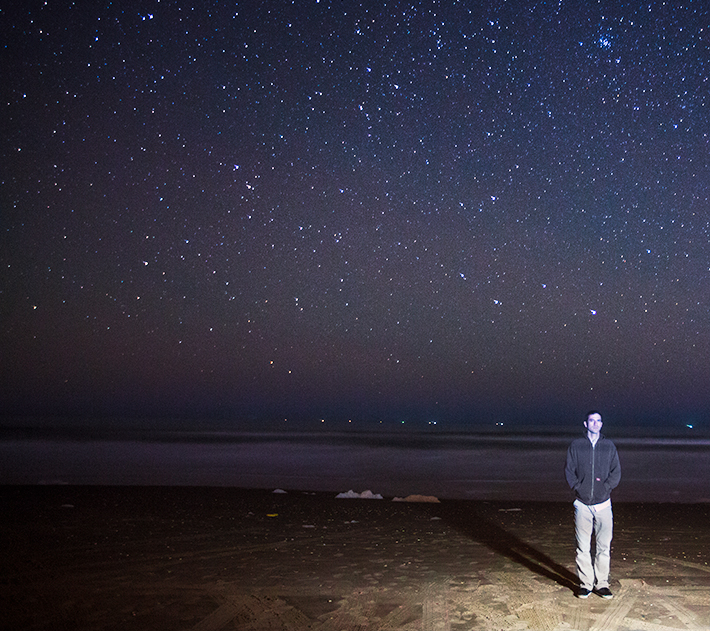 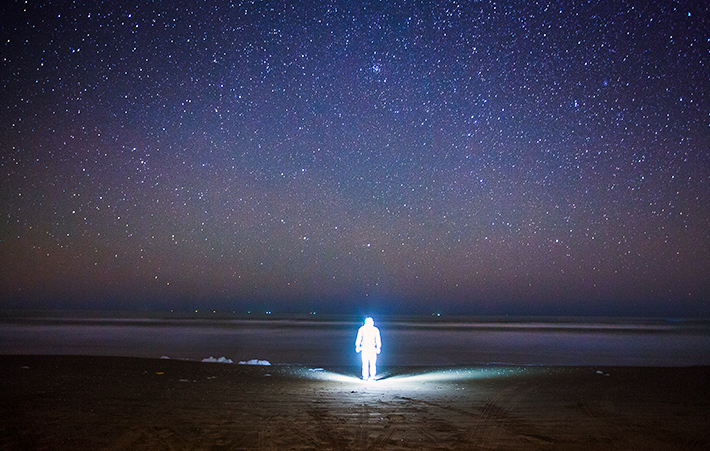 We used the flashlights on our mobile phones to create the light streaks and effects you see in the images. I stopped trying to think too technical and just decided to run with the settings I had, which varied from the following: (Canon 5D Mk II, Canon L 16-35mm 2.8---> 20-30seconds f/2.8 1000-2500ISO). I wanted to see what kind of cool things we could create together. We ran around the beach with our phones and occasionally people that would drive up would slow down again to see what we were doing, probably thought we were completely out of our minds, and swiftly sped off. 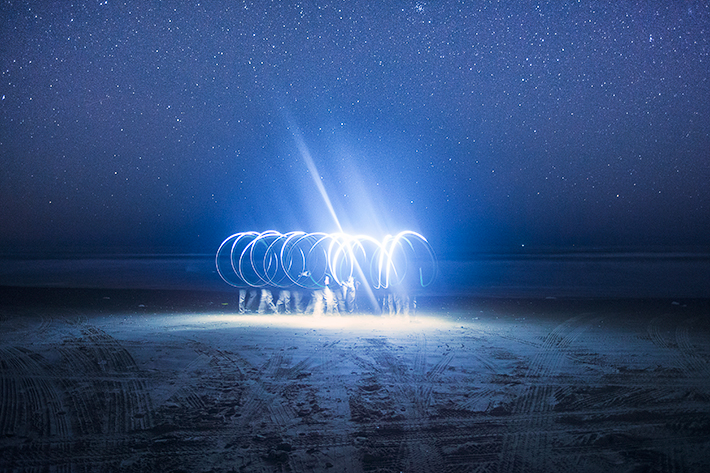 I noticed that to the left of us there was a bright light that was coming up over a sand dune. It must have been the ambient light of hotels and businesses on the other side of the island. I tried to get Ed to climb the sand dune so that I could experiment with the light coming off to see if it would backlight him, but as he walked back to me he informed me that a couple was hidden up there and he didn't want to disturb them. Well, I might be a bit more extroverted and foolhardy compared to Ed and figured the more people the merrier. I climbed the sand dune and politely asked the young couple if they would like to pose for us. I explained to them that they would have to stand perfectly still for 30 seconds and after several tries we got it down. We yelled at the couple to come down and take a look. Their reaction was priceless as they went through the images. This photo turned out to be my favorite of the night. 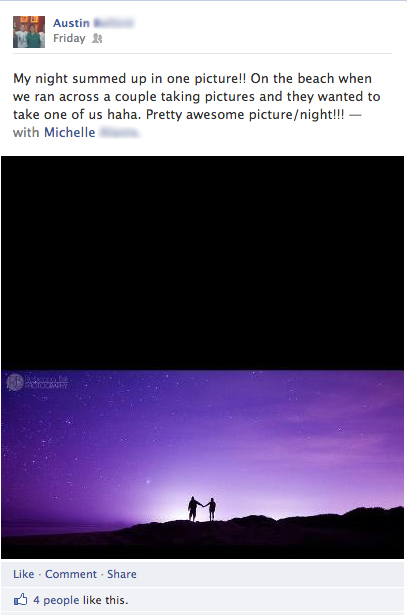 We as photographers (or anyone in the arts) have a unique position of being able to genuinely enjoy what we do as a profession outside of the work environment. While I am sure that accountants, secretaries and bank tellers all love their jobs, have you ever seen any of the above rave about doing this on the weekends on their time off? I didn't think so. We need to take the time to shoot what we want and not worry about how people are going to receive the images that we create. I know that my star images are not perfect nor are they technically sound in any way. I never expected them to be, but I truly enjoyed myself that night shooting under the stars. I gained a new friend in Ed, and we got to meet a few new people, as well.  When I posted these to my personal Facebook other people seemed to love them too.

So, step back once in a while, let go of the worries concerning your career, grab your camera and set off onto the world. You might be surprised to find out what awaits you and your lens. It is after-all the reason why we became photographers in the first place... to capture what we love.

I am a commercial photographer for an ad agency in McAllen, Tx (The delRio Agency). You can find my personal work on my Facebook Page. Feel free to contact me at rebeccabrittphotos@gmail.com

This is an incredible story! I think that I would like Ed. For nine months, Gawd, the first photo of the stars is absolutely stunning!

Yea, that couple holding hands on top of the sand dune? Absolutely Stunning!

God, I wish I had the patience to take star photographs. Perhaps thats something I need to work on this year,

Nice story, and totally true. Isn't it awesome that personal work can in fact get you better gigs. I think it's for a very simple reason: loving photography so much that you spend your free time doing it as well shows you have a passion for it. Passionate people are awesome to work with :) Who cares about technical perfection, it's about the soul of your images.

We may not have the fun rocky beaches of NorCal on the TX guld, but our sand dunes are a lot of fun. The whole stretch from Mustang Island to Padre is an interesting ecosystem.