Stunning Timelapse Video Reveals The Beauty And Ferocity Of The West

This powerful timelapse video called "Wyoming Wildscapes II" was put together by photographer Nicolaus Wegner. Taking 14 months, this video covers the cycle of the seasons, the shifting of the landscape, and the ever-changing weather. To find out more about this project, I interviewed Nicolaus and asked about his gear, workflow, and experiences.

Drawing on inspiration from the likes of Tom Lowe and Ron Fricke, Nicolaus Wegner created his first Wyoming Wildscapes timelapse video over a year ago. This new video was to be the follow up to that project. From his website, here is what he has to say about the video:

This project was created for two reasons. My love for Wyoming and all of the beautiful landscapes and wild weather it has to offer. And my interest in sharing that view with those around me. Watching the stars at night high in the mountain wilderness, experiencing a meteor shower in the lower basins, having a supercell spinning directly overhead on the high plains, watching lightning play across the hills and prairies, trying to stand up against 60mph ground blizzard creating winds in the dead of winter, all the while spending much of that time with the love of my life, my amazing and ever patient wife...that is how I quantify this endeavor.

I asked Nicolaus how he was able to find locations for his sequences. Needing to be able to leave a camera undisturbed for several hours, especially for night scenes where light pollution could ruin hours of work, meant some locations would have to be hiked to.

"Some of the basin shots I had to hike the gear in a few miles, then return to my vehicle to sleep or rest. Other times I'd just hang out or go exploring somewhere while the time lapse rolled. For the wilderness stuff, I was usually camped within a mile of the gear. The hardest shots are the mountain scenes. Getting in there with the gear can be exhausting. (But) totally worth it." 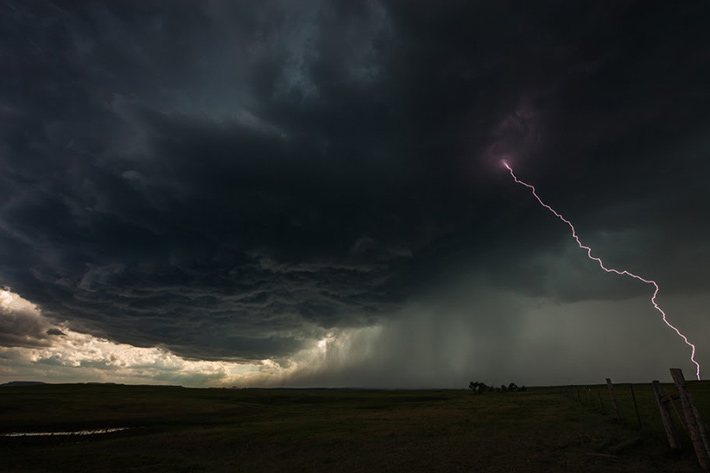 Part of what makes this timelapse stand out from others is the inclusion of some amazing severe weather sequences. Putting oneself in a dangerous situation was something Nicolaus had to do on a few occasions, but smartly didn't stray too far from his car.

"I had a couple of very close strikes while setting up gear during the severe storms this summer. Terrifying experiences. You don't want to get too far away from a vehicle if you don't have to when severe weather is in play. For the snow and rain, best I could do was wrap extra rain gear and bags around the moisture sensitive parts. Had a bunch of failed winter shots due to gear freezing up, but there's not much you can do about that without carrying a battery and wires around."

Besides a motion slider system, Nicolaus's kit was kept small so that he could be light on his feet and quick in his setup. His camera bag typically had the following:

For extra coverage, he would sometimes use two cameras at once:

"For the severe weather, I had two cameras snapping away. Usually one with a telephoto and one with an ultra wide. For the basins, snow, and mountain wilderness, one was dedicated to time lapse. I'd be moving around with the other and a tripod capturing single exposures for my print work." 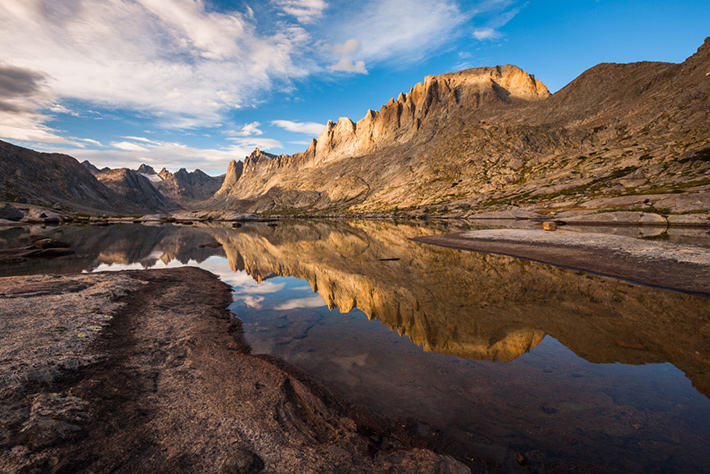 Post production plays a critical role in timelapse videos, as even the slightest oversight while shooting can ruin hours of work. Nicolaus had to deal with some dust issues, and turned to Lightroom 5 for that.

"Everything is edited in Lightroom. Really dig LR5. It was a huge help in really pulling higher dynamic ranges out of the raw files. Plus it saved a ton of shots that had massive amounts of dust spots in them. After all the LR work, I exported them as full resolution jpeg (100 quality), no sharpening. All the speed changes, text camera stuff, and sharpening was done in After Effects."

The music in the video goes perfectly with the visuals, and in this case Nicolaus was able to collaborate with the group Ghost Kollective, who put together a great soundtrack. Nicolaus remarked, "They put together a great track in a short amount of time, dealt with all my requests like pros, and I'm very much in their debt for it." 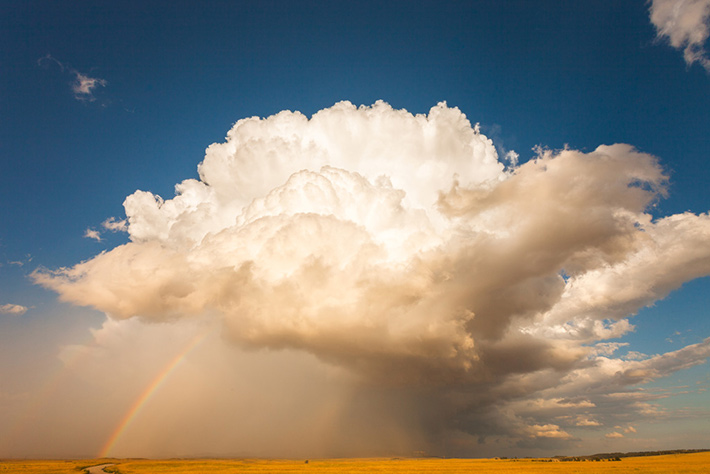 When asked if he ran into any problems, or lost any sequences due to human or technology errors, Nicolaus pointed out that several timelapses were ruined. He also noted that he had fewer problems than on his first video, learning from the experiences gained on that project.

"I made most of my biggest mistakes during my first Wyoming Wildscapes project. Plenty of shots I really liked were ruined due to hail or rain, and a couple to annoying mosquitoes or bugs. We had to escape a few supercells that I would have liked more footage of, but it's best to survive and chase another day. Wind is always a factor here in Wyoming, and a bunch of sequences I really liked were ruined by a couple of gusts I couldn't anchor for. One or two to human error, but luckily you sort of get a groove going after taking tons of time lapses. Eventually they don't happen as often."

With such a time-intensive project, it could be difficult to stay motivated. Hours and hours spent capturing stills, processing countless images, and planning for the next shoot was all work that had to be done– and without a client funding the way.

"Wyoming is a beautiful state, and I never tire of exploring and photographing the variety of landscapes and weather we have here. This being a personal project meant I didn't really have a set deadline, so I was able to approach it like I would any adventure. There were a couple of times halfway through a long hike in the mountains where I asked myself what the hell I was doing with so much weight. But seeing the results usually motivated me to get my butt moving again." 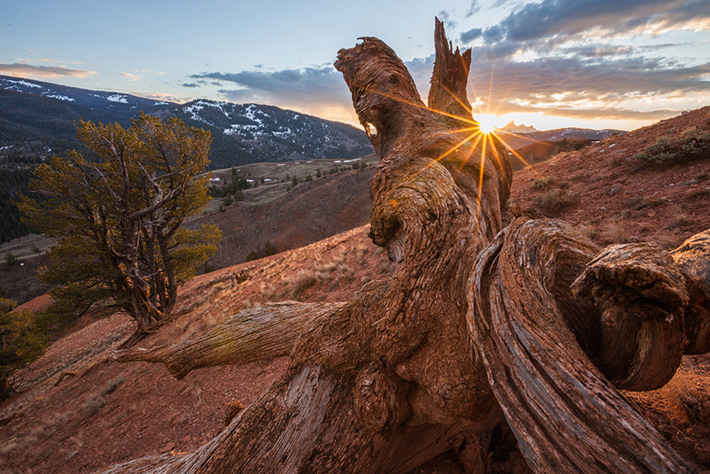 Nicolaus says that for his next project he plans to head out to the Rockies and hit up some of the national parks in those areas. I'm definitely looking forward to seeing the results.

You can see more of Nicolaus's work on his website.

All images by Nicolaus Wegner, used with permission.

BTS / January 19, 2015
Go Behind The Scenes On "The Great Human Odyssey" - A Documentary On The Origin Of Our Species
Log in or register to post comments
8 Comments

Wow! It's one of the best time-lapse that I've seen. Really beautiful. Congrats to Nicolaus Wegner. Great work. Stunning.

I agree that was probably my favorite time lapse compilation of all, I watched it twice and I'll save it for later to watch again. what rail setup do you prefer to use? I'd like to get into time lapse and incorporate camera panning but I don't know what to buy that's cost effective while keeping smooth movements

I can't recommend my rail Andrew. In my opinion overpriced and it broke down on me several times. One of the bolts stripped out with very little pressure, and I had to jb weld the damn thing in. Not to mention it constantly is in need of tightening and adjusting. If I had to maintain the camera gear as much as I had to that stupid thing, this project would have never been completed. Best bet is to start cheap and see if it's worth it for you.