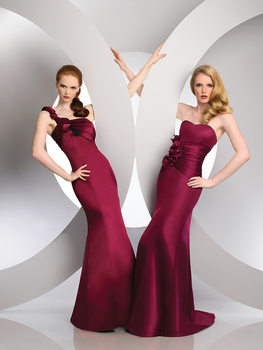 This studio fashion shot of two fashion models wearing dark red gowns was created for the designer/manufacturer for their advertising. The set was fabricated out of carefully cut Foamcor. I used a Matthews Grip Arm and Boom Arm with a razor affixed to the end as a radius to cut the large circular shapes. In the back is a light grey seamless paper which is lit by Profoto strobes. The middle layer was made from two 4'x8' Foamcor sheets covered with light grey seamless with center circle cut out. The front layer are large rings cut from more 4'x8' Foamcor covered with the same light grey held up by Auto-Poles just outside the crop. Gridded strobes hitting the middle layer provided glow in the corners for depth and separation. The models were lit with large softbox. The floor surface is clear Plexiglass on top of the light grey seamless which mirrors the forms of the set and models. Other tech: Hasselblad H1 with Leaf Aptus digital back and 80mm lens.