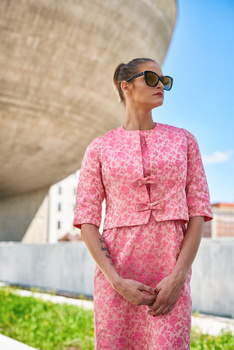 I had noticed the exceptional location at the NY State Capital of Albany NY while passing through on a previous shoot. The Empire State Plaza was designed in the mid-century style sometimes called Brutalist.

This model had found this pink outfit at a thrift store and was interested in creating a shoot around it. I had kept the idea for shooting a retro styled shoot at that location in mind waiting for the right application. Because of our schedule with other things, we only had mid-day on a Saturday which turned out to be acceptable. There were very few people on the plaza, though the high sun was a challenge. This particular shot takes advantage of shade from one structure to put the model in front of The Egg curved-walled theater building.