Early in February of 2013, Rovio announced a new side project called "Angry Birds Superstars," which juxtaposed athletes with the hugely popular Angry Birds imagery. Though there likely are more on the way, Rovio has started the project with NHL Stanley Cup champion Anže Kopitar and NBA All-Star Veteran Andrew Bynum, both photographed by Jere Hietala. The point? Because it’s fun and awesome.

To really understand how Angry Birds and athletes came together, we first have to look into the mind of photographer Jere Hietala, who hails from Finland. "Sports has always been a big part of my life, ice-hockey being the number one love in my life (I still play). When I was at my twenties, I was doing aggressive in-line skating as a job basically. I was sponsored by K2 skates, Adidas and at one point and some smaller clothing companies. I won the Finnish championship in 1998 and placed 4th in the Scandinavian championships in 1999. Doing so well at the competitions, I got the amount of courage to try my skills/career as a pro athlete abroad. So, I moved to St. Louis in the United States."

Of all the possible places, why St. Louis? Hietala explains, "The universe must have had some kind of a plan for me as there was a Finnish family who were kind enough to give me a place to eat and sleep. All I had to do was clean up the house time to time." So Hietala found himself in the midwest, barely speaking English and knowing basically nothing about American life. "All I knew was a couple of easy sentences in English: 'how are you,' 'I love you' and the like.

"I spent all my days skating and learning new tricks, but as most of the guys in that sport, I started getting some difficult bone fractures and other not-so-easy-to-fix types of injuries." After about 20 broken bones, Hietala decided to take a break from his beloved sport of skating, and started to take photos of his friends. "The camera quickly became a way for me to let go of the skating. Even thought it was a tough thing to do, photography made it a whole lot easier."

Hietala moved back to Finland and took his love of photography with him, and wanted to do something related to photography no matter what it was. So when a position opened up for a school photographer, Hietala took it.

"This really was the best thing that could've happened to me. Soon, the director of photography noticed my passion and sent me to an advertising studio, which was owned by his friends. One thing led to another and all of a sudden I worked there as an assistant and no time at all and I was shooting my own clients. In 2005, only a year after my career started, I placed first at the Finnish Advertising Photography competition. 2006 I received the QEP (Qualified European Photographer) award, that was a good start."

The next logical step? Starting his own business, which he did in 2007 and has been working at ever since.

So with Hietala's history as a backdrop of how sports can mix with a great advertising photographer, in comes the bizarre combination of sports and Angry Birds.

"Angry Birds Superstars started as a 'crazy idea' a couple of years ago. I was having a coffee on Christmas Day with my good friend and partner Tero Ojanperä (Former member of the Group Executive Board of Nokia and has been recognized as 7th Most Creative People In Business 2009 by Fast Company), and somehow, after a great deal of brainstorming, we definitely liked this idea and Tero decided to wrote to Peter Vesterbacka (CMO at ROVIO) that second. Peter was interested and that's how all got started. Me and Tero are now partners at ArtFury, which is the co-owner of this concept along with Rovio."

Many of us have really crazy ideas that involve pop culture references, but so few of us ever get a chance to make those dreams a reality. "When we got the green light for the project, my first thoughts were 'oh my god, I love my life, this is huge!' Rovio is massive and possibly the number one company in the gaming industry. So, of course that felt amazing and after a long time of waiting the formalities from different agencies and partners that got involved in the process (the companies that made it happen with us, thank you HP & Amazon), I was just super happy to see that hard work always pays off." 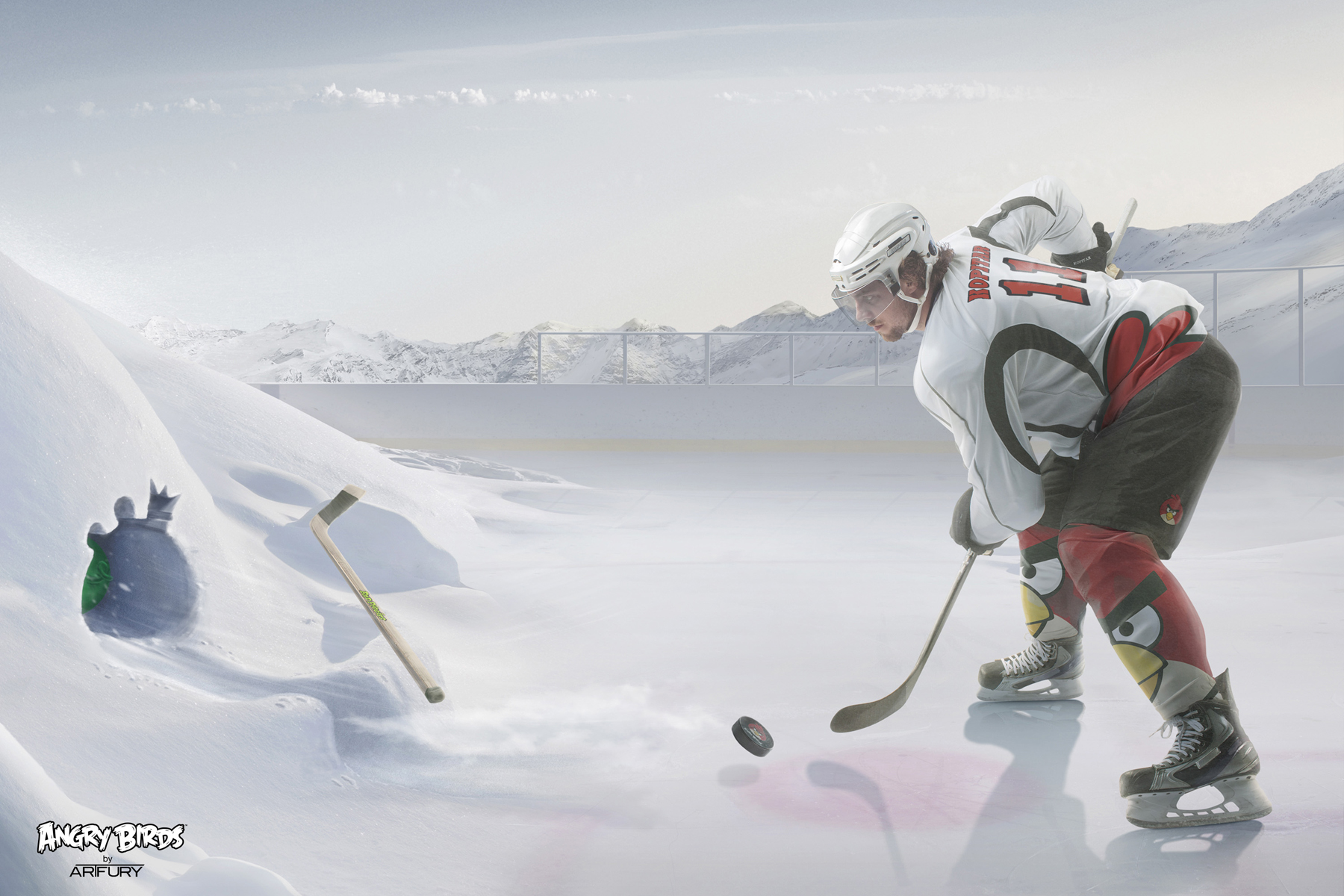 So with all those involved parties, there had to be a lot of restriction on what Hietala could do, right? Actually, surprisingly no. "I basically got free hands for the creative decisions, as the whole idea originally came from us (ArtFury). Rovio of course frequently was checking that the quality of Angry Birds- brand related details, but all went pretty smoothly. Also I have a friend that I always do my post-production with during tight schedules, so thanks to Jarno for being my second eye. Also, gotta say that Tero surely had some brilliant ideas how to improve the photos, so big up for Tero as well.

To be honest, this kind of larger scale projects are not doable alone, so I'm really grateful I've the best guys around me, supporting my every step."

Working with the athletes was a blast as well. "Both of the gentlemen, Andrew Bynum and Anze Kopitar were just great to shoot with. Everything went as smoothly as possible with the actual shoots and I even got to know these guys a bit personally, which I appreciate a lot. It's amazing how things go in life, from school photographer to a photographer of super stars. 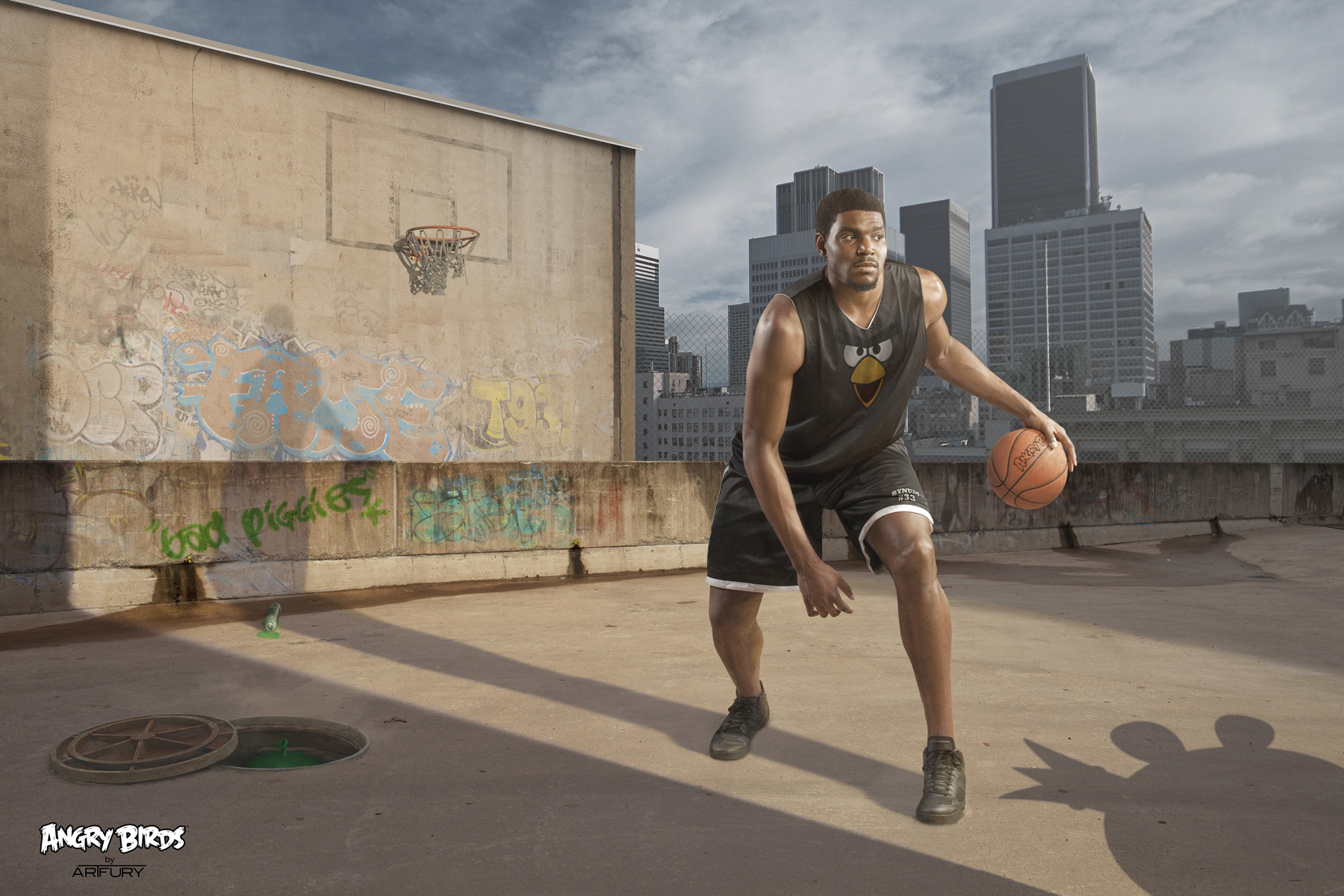 So what was gear was used to create these images? "My absolute favourite lighting gear is ProFoto, so there was not even a second option on this one. To be more specific, I had three 7s 1200 generators, air sync, six heads, various light shaping tools, such as soft boxes, reflectors, honey comb grids and umbrellas. For the camera I decided to use the Canon 5D Mark II (didn't have the Mark III yet) and the L-series lenses (fixed 50mm, 35mm and some shots with 70-200mm). Usually I would've used the Hasselblad H3, bu I wasn't sure how quickly I had to work, so wanted to make sure everything is set up for a fast session.

"My own personal mantra for each shoot is: it's always about making the right decisions on with what equipment you choose to work on the specific given location, on what prevailing conditions and how you're able to deliver the highest standards of photography even in the most stressful situations, with the most demanding clients."

The post production was made easier by the lighting and staging of the photo. "The athletes were shot on solid color backgrounds to make the cut out process as easy as possible. With Andrew, I had plain white wall as a background and on Anze's shoot I just made the background all black using only the flashes, shutting out the ambient light. In the final image, the whole world is matte painted/composed around them. Basically only thing I had to keep in mind when setting up the lights for the athletes was of course the final image and its main light direction. I ended up making universal/multidirectional light, which allows me to play with different kinds of lighting conditions in the world that the athletes were being composited. 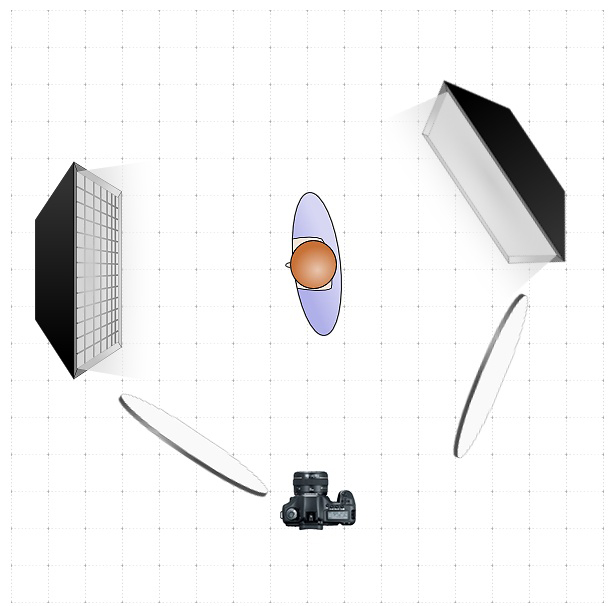 "In Anze's image we have all the snow painted, mountains are composed from different scenery photographs and all the Angry Birds details in Anze's hockey gear is also painted/Photoshopped. 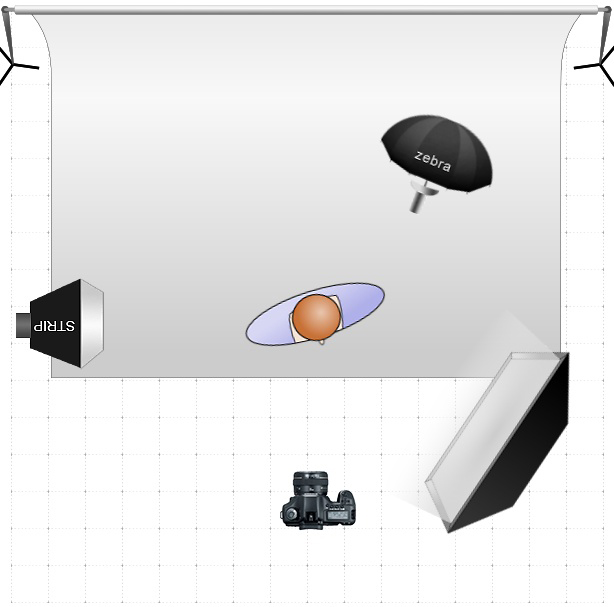 "Andrew's image is almost 100% photographed, meaning all the parts I took myself. Cement ground and wall, downtown LA is all photographed. Only the graffiti's on the wall were from my stock photography and they were of course blended in way so they'd look as old and worn out as possible."

Thanks to Jere Hietala for taking the time to talk with me. All images used with permission.

Thanks for the lighting setups!
PeteSuttonFineArt.com

Is it just me or do the shadows on the basketball player look obviously fake. I would think that the shadow would be darker closer to his feet and lighter and softer the further it gets away. I only see a softer effect on the actual wall. There is no gradient to the shadow. His feet just don't look like they are planted on the ground, but more like hovering slightly. I'm not saying this is a bad image. I love the image otherwise. Curious of other Photogs thoughts???
www.danlubbers.com

Why is the angry bird flying into the snow pile when the puck hasnt hit him yet???