WIRED's Review of the New GoPro HERO4 Session Reveals Some Minor Problems, and a Dip in Quality

Just last week, GoPro announced a new a camera in their ever-expanding lineup of action-POV cameras. The new camera is called the HERO4 Session, and as Doug Sonders posted last week, it's smaller and lighter than the previous series of HERO cameras. In this video review, WIRED's Brent Rose takes the Session out on several different adventures, comparing it to the HERO4 Silver along the way.

The results? As you will likely see in the video, the HERO4 Silver packs more resolution modes and dynamic range, yet is at the same price point. The upside to the Session is of course the smaller form factor, but also an increase in battery life.

There's a great frame around the 4:52 mark that shows footage that was shot side-by-side, and you can clearly see some of the differences in not just quality, but performance of range. There might be some inconsistencies in how each GoPro's metering was set up, but that's the only user error I could imagine for the shot below. 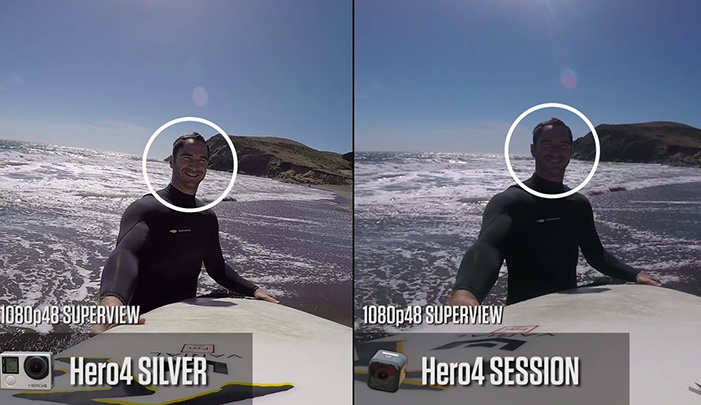 This is kind of a let down, and honestly a step back for GoPro, but maybe there will be a HERO5 Session coming out at some point, which brings 4k and the kind of clarity we get with the HERO4 Silver. No doubt that will cost another $100-$200, but the way some filmmakers burn through GoPros, it wouldn't surprise me to see them popping up all over.

What do you guys think? Is the smaller, cube style better for mounting/battery life so much so that you'd buy it over the HERO4 Silver? 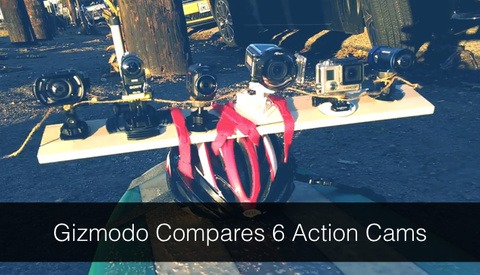 The face shot is a bit misleading. Clearly what happened was the surfboard caught the sun just right and acted as a reflector to give his face more light. There is no way all that extra light just came from better dynamic range...his face would be black regardless because of the lighting.

But you can see a big difference in the sharpening, WB, and overall image quality for sure. Of all the current GoPro Models I think the Silver is the clear winner because of the touch screen (we bought them over the Black model).

It looks like the same exact moment from the video. I don't think its the surfboard acting as a reflector for one and not the other. Check 4:40 on the video.

Yup - the cameras are mounted right next to each other on the board and recording the exact same field of view so that's not it. It's just got better dynamic range.

then why is the bluff brighter on the the silver and darker on the sessions and and the sky essentially the same on the two?

Intergrated waterproofing might help with watersports other than diving, in more tropical climates, high humidity + higher air temps + a dip in a cool water = instant fog in dive housing. Saves on the trouble and cost of anti-fog beads if the lens doesn't fog up.

Yeah, but the image quality sucks.

haha yea, just got one for kicks, build quality is unlike anything else gopro has done before, hoping for a Hero with intergrated waterproofing.

I know the picture quality is not crash hot compared to the hero 4 silver which I have one of but for the size of it so it is good what it can do and it suits me because the hero 4 silver is very intrusive in public over here in Australia. I recently came back from the Sydney Harbour where I met Prince Harry and use the hero 4 silver. On the train trip back I turn it off as a courtesy and when I got to my home location train station I ended up breaking my leg due to the barriers closing when they shouldn't have so would have loved to have had that on footage for compensation and would have solved the problem. So I will be getting one to use as security for myself and using the silver for my outing during the day. I'm a quadriplegic and the silver is very hard to push the button and I have to use a stylus and even then it's still hard whereas the session should be pretty easy with no outside hard casing. I already also have the remote control but it only gets about an hour and a half on 1080p at 30 frames per second chewing up too much on Wi-Fi. It is a tiny product and suitable for certain situations. If you want great quality you have to get either the silver or the black. But for my situation it will do me fine. The price is a bit of a problem and I agree it should be a lot less for the drop in quality, I'm sure it will come down in time but for me it's a case of need over dollar. Thank you for the review regards Mark Sydney Australia

Those Cameras are expensive, GoPro has to think of the way to make cheaper action camera. There alot of GoPro alternatives for price much cheaper than a gopro and quality not worse. I seen here top 5 Gopro alternatives and it really helped me with choice of my first action camera. ( most of the cameras competitor’s action cameras below $100 , take a look here http://goo.gl/4wr0Qx )