I’m a huge fan of Annie Leibovitz and the imagery she has captured over the past few decades. Being a self-taught photographer, I looked to her work time and time again for inspiration and motivation. Over the course of a year, I scoured the internet for information on her lighting setups, equipment and methodology. But, the more I dove in, the less concerned I became about equipment and the more I felt the need to simplify my style.

I’ve read the books, watched the documentaries and read the interviews, I even went as far as to research her past assistants. I would never claim to be as talented a photographer as Leibovitz, I'm still learning everyday. However, I am claiming I've done enough research to tout a simple Leibovitz light setup and I love talking about it. But, this article isn't necessarily about Annie Leibovitz, but more about her style of photography that has greatly inspired me.

Sometime last year, I began to focus more on subject matter itself and what it means to the viewer rather than the technicalities of it all. I began to see lighting as light, which meant bringing a natural feel to my lighting and imagery. Around that same time I introduced a set of images called the "Oliphant Portrait Series". The series focused on a set of my colleagues that have been inspirational to my career, much of them being photographers, designers and artists. The images were all captured in front of a custom painted 9x12 canvas from Sarah Oliphant of Oliphant Studios, hence the title of the series. The images were a smash hit and I received a lot of great feedback, but the biggest question of all was... "How did you light that?" 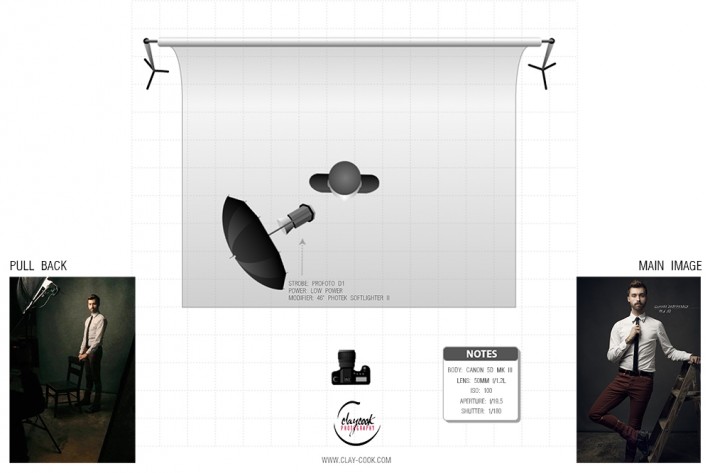 One Light Is All You Need

During my research, I learned that when Annie started shooting portrait assignments, she would only bring one light and an umbrella. For many years that was her go-to-setup which created some of the most iconic images we know. Today, she has progressed and moved into several different diffusion methods, but in many behind the scenes videos you will always see one Profoto Acute Head and one large soft modifier; a 60" Photek Softlighter II. That is very similar to the setup I used for my series, one light and one umbrella.

If your ever assigned to a group portrait,  use wrap-around and to your advantage. The larger the group, the larger the light source. Don't feel the need to add more light or a stronger light, simply add a bigger modifier.

The closer the light source is to a subject, the softer the light will fall on the face. The distance from the sun to the earth is about 93 million miles, hence why the sun on a bright day creates such hard shadows. Don't be afraid to place that light close to your subjects face. On many occasions, I have had the light less than a foot from the cheek and if you were to look at my RAW images, the modifier can be clearly seen in the frame. But, with a quick cloning session in Photoshop any and all distractions can be removed. 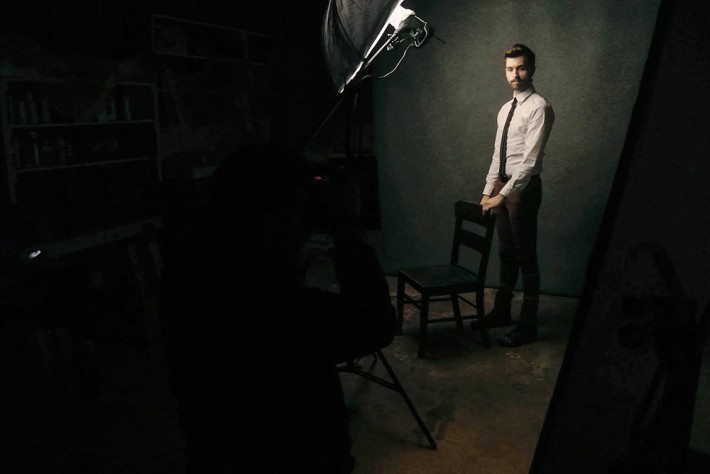 If you place a subject near a window, the light would look natural and wrap-around the subjects face. Take that same thoery and apply it to one strobes. The modification that lies in between the strobe and your subjects face is up to you. But, in the case of Annie Leibovitz, a 60" Photek Softlighter II proves to have worthy results. If you want to go even softer to mimic that nice window light, place a scrim in between the 60" Photek Softlighter II and your subject. Leave about 2-3 feet in between the light and the scrim then place the subject about 4 feet away from the scrim. What you'll notice is a nice soft even light that still retains a hint of drama. 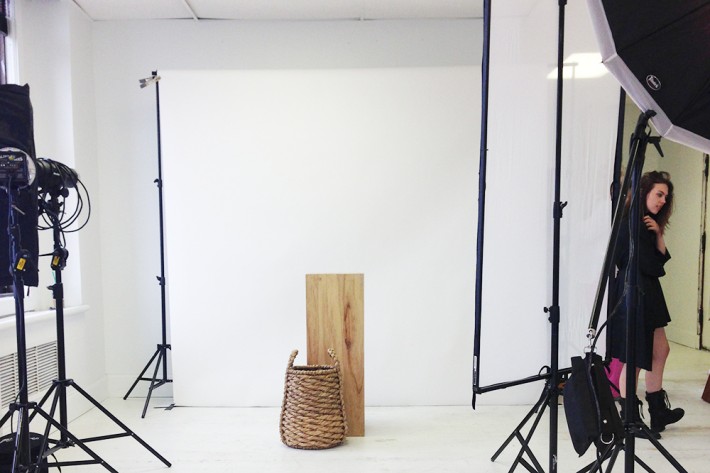 It's important to get it right in camera, but there is also a smart way to go about setting your image up for post processing. In the digital age, we can easily increase exposure in post, but we can't take away blown out highlights. Under-expose your image a stop or two and you'll not only save yourself some processing headaches, but you may just see a overall more dramatic image. Never be afraid to go to dark with those shadows. 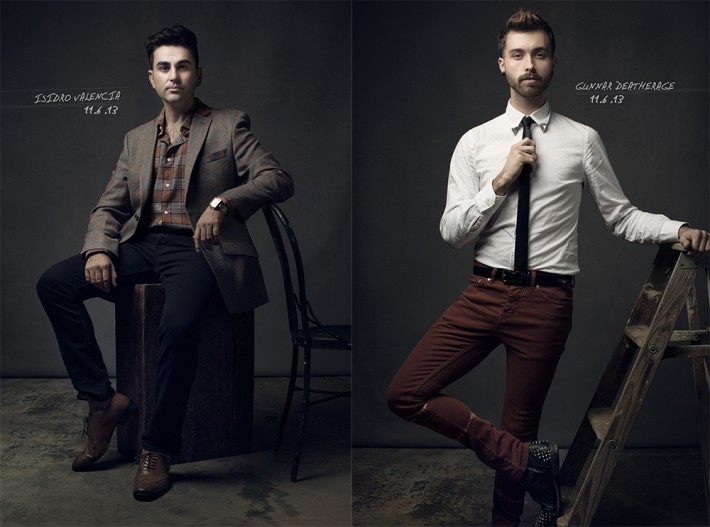 Using a slow shutter speed in dark situations is an important facet of my work and I know Leibovitz has always incorporated ambiance for more natural and realistic portraiture. I dove into this technique more in the article Up The Ambient - Create Beautiful Portraits By Mimcking Daylight. Shutter speed only controls ambient light and aperture controls artificial light(and some ambient), therefore you have the ability to bring up the exposure of the ambient light without altering the flash using shutter speed. Up the ambiance then create drama with the artificial light source. You want the strobe to mimic the look of natural light. 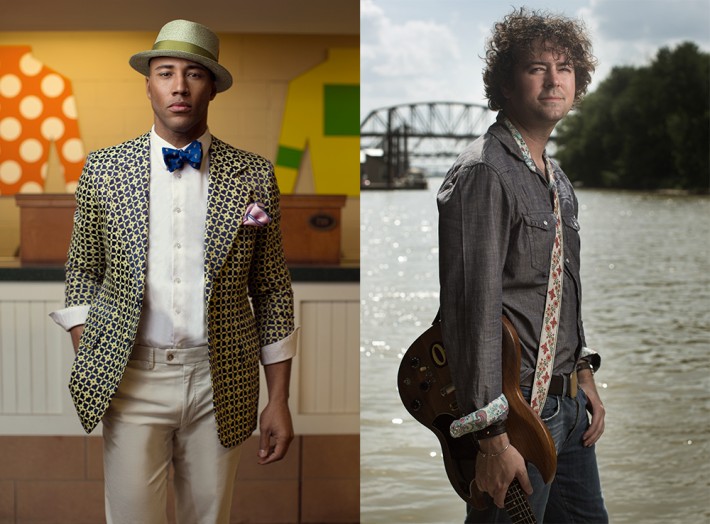 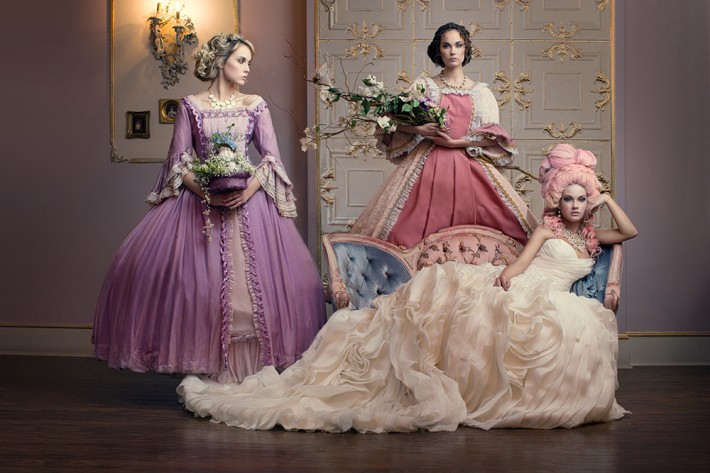 Next time you have an open studio or a bored friend, grab a strobe or speedlight and a couple of soft modifiers. Using some of these tips explore the depth and dimension of your lighting. But, simplify things, connect with your subject and you'll see that less is very much more. That is my one light challenge to you.

DIY
Can You Tell The Difference Between $10,000 and $425 Photography Lighting?

Commercial
How Buying a New Camera Made Me a Better Photographer

I love single light, most of my portfolio is one light.

One light is the way to go! Thanks for checking it out Dani!

If you can't tell someones story with one light, adding another light won't change that. ;)

That's one of the best quotes I've heard in awhile. Thanks for sharing!

haha, cheers man. Popped into my head. Any plagiarism is incidental. Gonna have to look it up before I claim it as my own.

If you thought of it, or said it, it's yours. As yours as any portrait you've ever made. You do't have to be the first doing/saying something for it to be yours. Just saying

“Many a man fails as an original thinker simply because his memory is too good.”
Friedrich Nietzsche

Great article, last week I ran in situation where I couldn't get multiple lights to trigger so ended up doing the entire shoot with just one light and was pleasantly surprise with the results. Will be doing a lot more one light shoots.

Thanks for reading Isaac! Bummer about your triggers, but perhaps it was a blessing in disguise. Keep it up!

Probably because the Bron is around $2600, whereas the Photek comes in at just under $100

Great article. When I looked into Annie's lighting I found the same thing.
Her single softlighter is what made the Vanity Fair Africa series covers so dramatic.

Thank you! The Softligher just rocks. I'm compared it to other modifiers and I just can't seem to find a modifier that has the versatility or fall off of the Softlighter.

Softlighter is just an umbrella with a secondary diffuser screen wrapped around it. There's no secret or magic behind it. I've used it a few times (and probably still own one, if I can dig it up from the confines of my basement). I've found it to be a poor quality product. You are much better off with a Westcott Octabank, or a Profoto umbrella with a similar diffuser screen (though granted, it's going to cost you a little more). Phototek is like the $5 umbrella you buy because you were caught unprepared. Good once or twice, but it falls apart in the long run.

I will agree Michael, the Photek Softlighter isn't meant for the long haul, I have owned 4 of them. But I have used the Westcott Apollo Orb and the Profoto Umbrella. I have actually even compared them side by side. They both produce amazing results, but the Softlighter does have a stronger fall-off, which is the look I want. At the end of the day, it's about the product we provide to our clientele, its up to you how to get there! :)

David Hobby was right. There is no Lighting 103...

Love it! Great post. I'm also a fan of one light. It's funny seeing a diagram with one light. =) Just curious, how much do the Oliphant Backgrounds cost? Do they sell them or only rent them out? I see the rental prices but don't see any "Sale" prices.

You're right on the marker!

Thanks for reading Bert! The Oliphant backgrounds are certainly an investment! You're going to be paying anywhere from $1000 to $3000 depending on the size of the canvas. Most of mine ranged in the $1500 area. I can guarantee you get what you pay for. They are amazing and have really changed the aura of my photography.

Great article! You've done a great job in finding that lighting style for yourself. But you've also managed to find that muted, creamy look she has as well. Can you your post processing approach to color and tones? Thanks!

Sure thing! Check out the article here:

Thanks Grant! I really appreciate that.

I broke down all my color tones in the article here: http://fstoppers.com/color-grade-like-a-pro-the-secret-the-cinematic-ima...

Thanks again for reading!