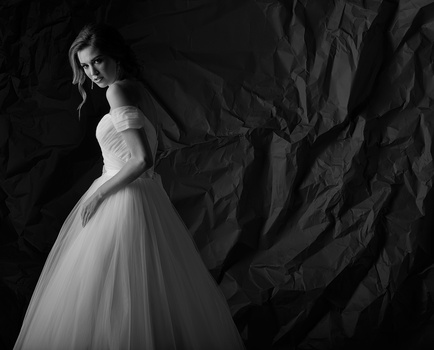 White Gown in Black and White

Studio photo of white bridal gown against black background for bridal fashion client. A long-time bridal fashion client of mine had raised the idea of shooting against crumpled seamless paper as a background a couple of seasons ago and I was not very enthusiastic, mainly because I hadn't tried it and didn't know if there was any particular technique to crumpling seamless without tearing it. As it turned out, it was far easier than I thought (feared) it would be. My fear was that because seamless paper is much thicker than a sheet of writing paper and would be more brittle and prone to tearing. We started with a 12x12' square of thunder grey seamless on the floor. Myself and two assistants started wadding up large sections of the paper and worked toward the middle. Once the three of us converged in the center, the seamless was essentially wadded into a large ball. I gave the ball an extra hug and we carefully expanded it back to a semi-flat square and it retained all of the creases and texture--though it was now about 9x9' in area. We shot for half of the day with this concept to great satisfaction from my client. They encouraged me to take some time to depart from conventional catalog set-ups to capture some moodier images that can be used for advertising and social media. This image was lit using an large Plume Wafer Softbox with an egg-crate grid from LightTools to produce a soft but highly directional beam of light that gives the glow to the model and gown and second smaller softbox with eggcrate from the opposite site firing directional light only onto the background that created a cave-like effect. Image captured with Nikon D810 with Zeiss 85mm Otus lens.