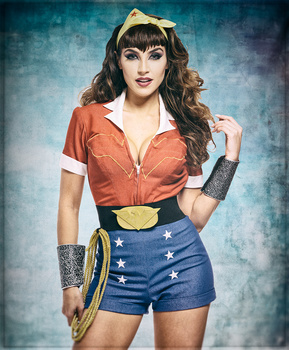 Studio photo of fashion model wearing a conceptualized version of a Wonder Woman costume. I shoot catalog photos for sewing pattern company who has the license for several DC and Marvel Comics characters. This was an intentionally sexy version of Wonder Woman which we treated with a nod toward pin-up style. Lighting was from beauty dish above model with hot background lighting wrapping around. We originally shot on pure white background knowing that the final image would be used in various applications. Here I placed here against file of hand-painted backdrop that I had shot on a separate job.