Helped by great design, marketing, and a superb product to boot, Syrp’s motorized time-lapse aid, the Genie, became incredibly popular with photographers. As the product that launched the company on Kickstarter three years ago, it was a premium offering, though. And sometimes, it’s useful to have something fantastic in a “light” version. Enter the Genie Mini.

The Mini doesn’t offer movement along any kinds of rails or slider on its own; and as such, one could see it as something a little too limiting. But that person would be missing the point.

In fact, the Mini offers a motorized mount that allows time-lapse photography to occur anywhere across a horizontal plane with the help of a panning motion. And although you can attach it to anything (including to the original Syrp Genie, which won't pan and slide at the same time) via the tripod thread on the bottom (adapters from 3/8” to 1/4” included), the best part about the Mini is its size: you can take it anywhere.

The overall size of the unit resembles a slightly oversized hockey puck. You could stick it in a jacket pocket — maybe your back pocket in a pinch (larger guys’ pockets only) — or stick a few of these in your bag for multiple camera setups anywhere you might travel. Of course, the best motorized time-lapse device is the one you have with you, is it not? And this one obviously wants to be with you.

Because of its size, you can come up with a number of creative solutions for placement and recording within any environment.

The Mini features an integrated Bluetooth/power button, a micro-USB port for charging, an 1/8" mini-jack for connecting to your camera, and an additional 1/8" mini-jack for connecting the Mini to the original and larger Syrp Genie to allow for simultaneous panning while sliding. It'll rotate a full 360° in 33 seconds, but the exact speed it rotates is calculated automatically in the app based on the parameters you set for your start and end frames and the interval or total recording time. An 8.8-pound load capacity means you'll be able to use this with virtually any reasonable DSLR/lens kit. And while the Mini will rotate in increments, stopping between each shot, it can also rotate smoothly and continuously for direct video recording.

(Of course, you can use smaller cameras such as GoPros just as easily for some creative shots)

Aside from the size of the Genie Mini, the real specialty is in the platform that you get with the unit in the form of Syrp’s smartphone app, which serves as the controller for your device. Connect the Mini to your camera with the appropriate cable, and from that point forward, all operations are done remotely via the app through a Bluetooth connection between the Mini and your phone.

(I even had to recently update the firmware, of which the app automatically notified me and wirelessly updated without me having to lift a finger)

While the provided tutorials are great to have, the app is quite self-explanatory with some mild experimentation. In a few minutes, it all makes perfect sense. You have complete control over the movement in terms of speed, how often a shot is fired, and the start- and end-points for recording. Whether you’re taking video or shooting stills to compile into a video later, you have all these options at your disposal.

Moreover, the most comforting fact about the Mini after its generous 40-hour battery life is its autonomy. Many systems that connect to your phone require a constant connection (wireless or wired) to continue to function properly. Get a phone call? Time-lapse interrupted. Walk too far away? Time-lapse stopped. In this case, it’s pleasantly surprising just how autonomous the Mini itself is. In all of these cases, I was able to disconnect the iPhone from the Mini in every way I could think of. Every time, the Mini continued shooting according to the program apparently sent to it via the app. When I wanted to reconnect, walked within range, turned my Bluetooth back on, ended my call, or brought the app back up, and within seconds my phone was reconnected and updating with the current progress of the time-lapse. This is how it should be.

Even firmware updates were easier than imagined -- it didn't even require connecting the cable to a computer.

As expected (but not always the case), Bluetooth setup was quite easy. Again, this was a self-explanatory process: press the Bluetooth button on the side of the unit and look for “Genie, Syrp, Genie Mini, or something like that,” and connect through the app. Sure enough, there was “GenieMini.”

Overall, the Mini was the most pleasantly easy product to use out of a number of things I’ve reviewed in quite some time — especially considering the expected complexity. This is something that just worked, and it deserves a lot of credit for that fact alone. Add to this the fact that you can add accurate, controlled movements to your shots with ease with the help of this compact package, and you have a product that could easily be indispensable.

You can creatively combine the Syrp Genie Mini and Syrp Genie for a combination of more complex movements, like rotating around a single point or creatively rotating the camera.

Improvements to Be Made

It's hard to come up with something to improve upon. But if pressed, there's one thing that does come to mind. The integrated Bluetooth and/or power button is integrated behind the rubberized finish of the device. It has a great, flush feel to it; but in practice, it could be a little too easy to press, causing the device to unintentionally turn on in a bag if there's some pressure against it. Now, that could be completely avoided by rotating the Mini just right when you're packing. And it's a silly thing to even mention. My recommendation: just be aware of that and pack accordingly. Showing up on the other end of a long flight with half your battery drained can easily be avoided.

Every chance I had to use the Mini, it performed remarkably well. At worst, its silence scared me into thinking it might not be working when I had a wide angle set over a long period of time, which meant the device only very occasionally panned an incredibly small, virtually imperceptible distance. But eventually, I would notice that the Mini had rotated a small portion over time once I gave it long enough. It never failed.

Although I have not had the experience of using the original Syrp Genie, I can only imagine the Mini would be the perfect companion, allowing for simultaneous sliding and panning motions. For anyone that needs something simple and compact to add a little flair to their time-lapse videos, it’s already perfect alone, just as it is.

The Syrp Genie Mini is available for $248.95. For those interested in other time-lapse and video-creating products, check out Syrp's full line of time-lapse tools, from the original Genie to sliders and more. 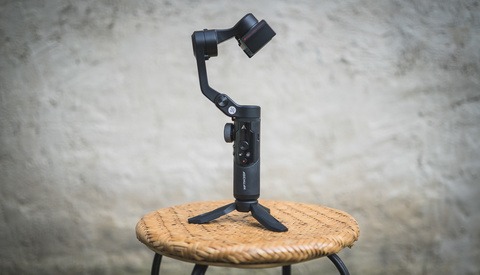 Have you had a chance to review holy grail time-lapsing with the Genie Mini? I was hoping to pair it with qDslrDashboard, but have to be sure in order to try it.

It looks like a good product, but it is not able to control shutter seed/ISO/exposure/etc like the Radian 2 from Alpine Labs does. Any chance we might get a review of the latter? I would really be interested in that.