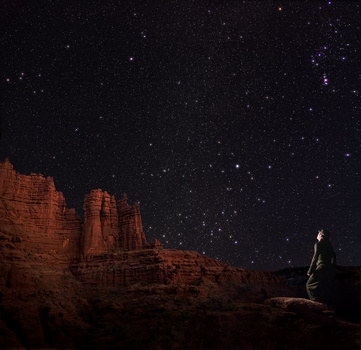 Good vibes often lead to great photos. It had been a long week at work and I just set off on a solo camping trip which already had me in a blasting-my-radio-down-the-highway kind of mood. The weather was set to be perfect on this early day in March. Needless to say, my creative juices were flowing.

I had purchased a star tracker only a few weeks early and had not yet used it. I was planning on waiting for a few more months when the Milky Way would really start to makes itself apparent in the sky. I realized that it may be a good idea to accustom myself to how it worked and how to polar align as this piece of equipment was a new concept to me. So, I decided to hike around Fisher Towers, outside of Moab, for place that would make a great night photo.

I settled on this location and waiting for the sun to set. Once it was down I framed my scene and exposed for the Towers. There was still enough glow in the sky that I only needed a several second exposure and could keep my ISO down.

My next challenge was getting myself into the picture. It was sufficiently dark by now that it would have been tough to stay still long enough for the exposure that would have been necessary. To counter this I mounted my Ice Light on a tripod in front of me and shot myself illuminated with the glow from the light. I blended this frame with the one for the foreground.

Lastly, I mounted my camera on my star tracker and exposed for the stars. I did a 2 minute exposure at ISO 400 and kept my lens wide open.

After blending in this image I did some final touches in PS.

Can anyone spot Orion's Belt and the Orion Nebula?