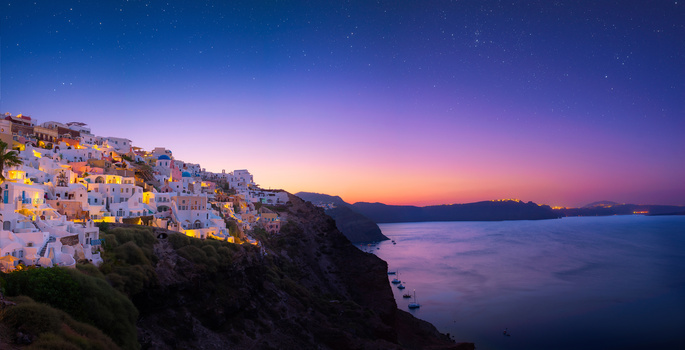 Once again I decide to complicate my photos but the result looks amazing stretched across my dual monitor desktop.

As per the "ush" I knew I wanted a high resolution image so this was a 4 row vertical panorama shot on my 36 mp K1. There were 3 aspects that I really wanted to balance in this image: the city, the sunrise, and the stars. Each reaches its peak time of shooting at different moments during the morning so I had to shoot the same vertical rows at three separate times meaning a total of 12 images went into the final shot.

The stars are best shot before sunrise, obviously. The sunrise has the most leeway as simply changing exposure values will yield similar results so that was the straightforward part. The city, however, poses the largest challenge. The lights from the buildings fade very quickly as the sun comes up yet when it is too dark the city lights become blown out by the time you get enough detail in the shadow areas. So, there was a very small window in which this balance was perfect. Fortunately I shoot digital so i was able to shoot the 4 vertical frames numerous times during sunrise so that I could later choose the most balanced set for the city

Stitching of the pano was done in lightroom and blending in the 3 frames taken at different times was done in PS.