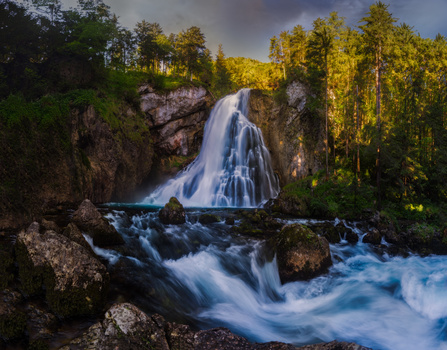 Initially I was planning on stepping into the stream for this shot but the melting ice in the mountains had something different in mind. The water level was „a bit“ too high and made this whole thing too risky. And as if this wasn’t enough, the waterfall was just too big to get it all into one frame with my 24-70mm lens. So, after a bit of thinking I decided to do something I hadn’t done for a while - a multiple panoramic stack (short: MPE). I first tried this in February when I was hiking on one of my so called „home mountains“. The thing is, you never know what you get in the end. It is like a super wide angle shot where you don’t know how big the distortion will be. So, when I saw the result Photoshop put together for me I was pretty impressed. In the end, it had 268 Megapixel which beats my first MPE.

Thank you! It really is.