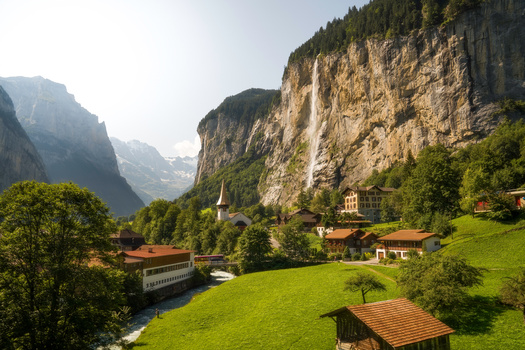 First image of my holiday in Switzerland this late summer.

Before I took this photograph I went up to Wengenwald by train in search of a better view. I soon noticed that I was sitting on the wrong side of the railway as I saw this possible shot but wasn’t able to take it. So, after walking around in Wengen for some time I hiked back down to Lauterbrunnen where I met up with my cousin who was a bit late. We explored Lauterbrunnen itself before we took the railway up to Kleine Scheidegg. So finally, since I was prepared this time and we were going the same way as I did before, I could grab that photograph.

Later on in post-processing I really liked the fact that I had also captured some fine details like the fisherman on the bottom left, the Swiss flag near the waterfall, a woman either watching or photographing something and so on - you probably can't see the flag at this resolution though.