The combination of two visually striking methods resulted in this surreal video by Vincent Brady. After checking the video, read on for some more information on the rig Vincent used to shoot with, and some insight on the programs he used to painstakingly stitch his images together for the final timelapse video.

After graduating last year with a degree in photography, Vincent decided to take a road trip and visit some of notable rock formations found in the likes of Utah, Montana, and British Columbia. The photo below shows what his rig looked like, consisting of four Canon T2i DSLRs each with a Rokinon 8mm fisheye lens, armed with Magic Lantern. 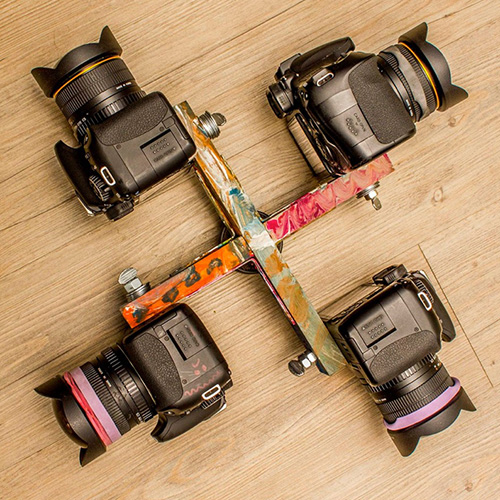 Vincent remarks on his blog about how he put these together:

Since the Earth is rotating at a steady 1,040 mph I created a custom rig of 4 cameras with fisheye lenses to capture the entire night-sky in motion. Thus the images show the stars rotating around the north star as well as the effect of the southern pole as well and a 360 degree panorama of the scene on Earth. Each camera is doing nonstop long exposures, typically about 1 minute consecutively for the life of the camera battery. Usually about 3 hours. I then made a script to stitch all the thousands of these panoramas into this time-lapse.

Vincent wanted to accentuate the motion of the moving stars, so he used a combination of the program Starstax as well as a script from Waguila Photography. Lastly, he used PTGui Pro to do the stitching by hand.

You can read more about his full process, here on his website.