Behind The Scenes – Up The Ante With A GoPro

I’ve always been enthralled with first person movie scenes, games and music videos. Clocking countless hours with Duke Nukem 3D in my parent’s basement on an old Packard Bell PC planted a seed that forever changed me. To this day I think The Prodigy's breakbeat electronic hit “Smack My Bitch Up” is one of the greatest first person videos of all time.

When my photography and behind the scenes videos started to gain a small following, I noticed the need to put people right in the action. It’s quite rare to find a video that really drops you right in the middle of the operation, as if you were shooting yourself. I had to ask myself, how can I produce a series of behind the scenes videos that really give insight into what I see day in and day out, without hiring a videographer?

Shortly thereafter I stumbled upon Jared Polin, FroKnowsPhoto and his unique first person videos. I was instantly hooked, but I saw a wide disconnect in what Jared does and what I do. So, I did my research, borrowed a friend’s GoPro and went to work. I always saw the GoPro camera as a cool device, but nothing I would ever need. Those that don’t own a GoPro usually say something thereof, until they actually purchase one. I found uses for this camera more than I ever would. It’s not only a great camera for unique commercial use, but also for behind the scenes and travel. Its low profile enough where people don’t notice it, but the quality is top notch for a camera of that size. It’s become a significant piece of gear in my bag.

Once I had played with the GoPro system for a few months, I decided to make the investment and purchase the Hero 3 Black Edition with all the necessary accessories and clamps. Unlike Jared, I had to keep the GoPro off my hot shoe so I could use the PocketWizard system. Luckily, I had purchased a Custom Brackets CB-Mini-RC a.k.a. the “Terry Bracket” a few months earlier. The CB-Mini-RC anchors to the bottom of your DSLR body and has a single “arm” that extends out to the middle of your lens for attaching a speedlight. With the bracket and a Nasty Clamp I had found in my studio closet, I finagled a sloppy GoPro mounting solution that worked for the time being. But, it was a poor concoction that fell apart with the slightest shake or bump. 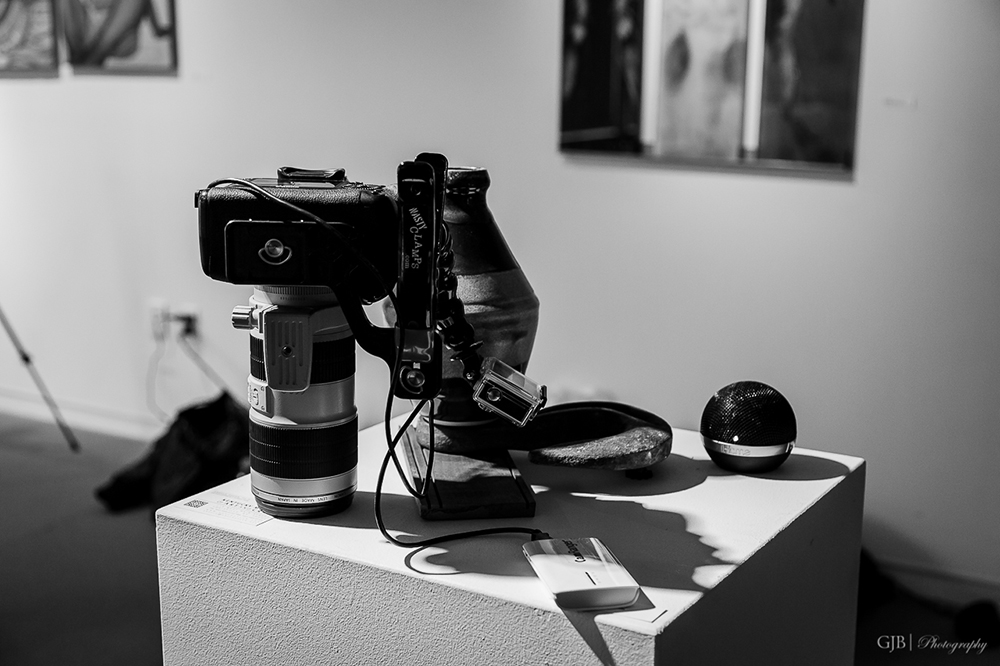 After a few trials with that “ingenuity,” I decided to invest in a Tether Tools Rock Solid 11” Articulating Arm that I was able to rig to both my CB-Mini-RC bracket and the GoPro. The articulating arm gave me flexibilty to move the GoPro to any orientation and was heavy duty enough to withstand the abuse of daily shooting. In a short period of time, my “First Person Shooter” videos became a small success and I received a lot of amazing feedback from all over the world. But, along with that great feedback, I received much criticism concerning the audio. People loved the fast-paced music with the giant “clang-clang” of the shutter, but the overall sentiment was that I needed some professional audio to record my speech. People wanted to hear what I was saying to the model and my team. This is where it all got real and my camera rig was amplified into what has been called the “Christmas Tree.” 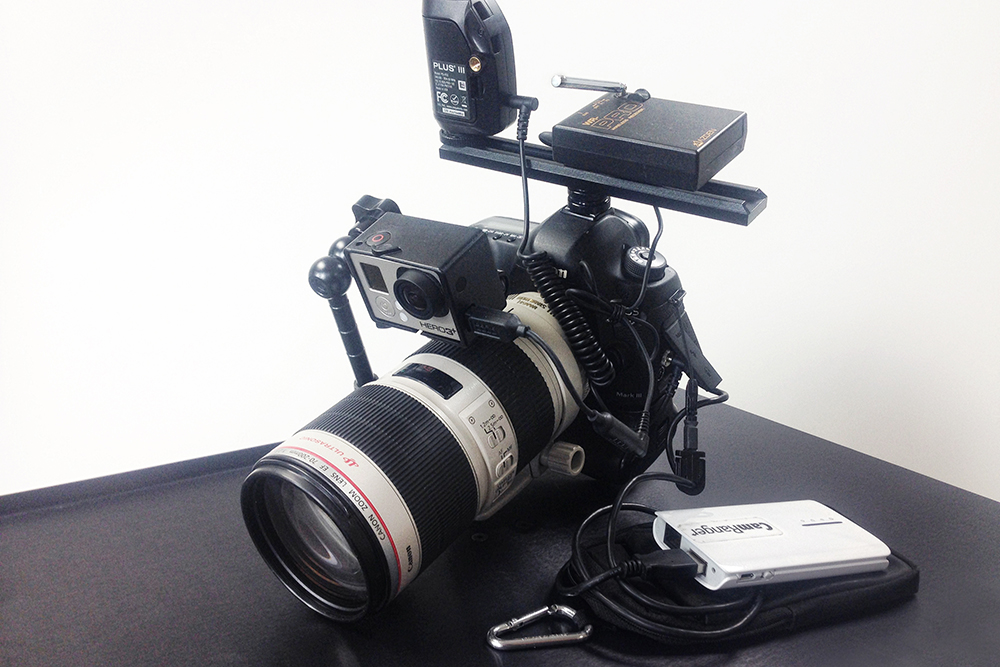 Also being a filmmaker, I know the pain of recording and syncing audio for film and TV. I didn’t want to have to take those extra steps to sync audio, so with even more research I discovered that you can record external audio directly into a GoPro using their 3.5mm Mic Adapter which acts as a “audio-in” via USB. However, this created an additional problem.. how would I rig the PocketWizard transmitter and a microphone on my DSLR? The Tether Tools Rock Solid Extension Bar was the end all answer to the problem. I was able to mount both a LAV microphone system and the PocketWizard transmitter to the extension bar which mounted to the hot shoe of the camera body. The LAV system plugs directly into the GoPro 3.5mm Mic Adapter and a sync cable runs from the PocketWizard transmitter ot the camera body. With all the added accessories, the entire camera rig weighs under 8 pounds, so it’s not as intimidating or heavy as it looks. The accessories add a meager 2 pounds to the 6 pound camera and lens.

Soon enough, I raided the GoPro store and purchased the backup batteries, an LCD screen, extra micro-SD cards and all the necessary accessories to make my workflow easier. I never thought I would become a GoPro fanatic, but through my travels it’s become a handy little device that I just love using for many different applications including behind the scenes, timelapses, travel photos and location scouting.

Just within the past few months, my camera system gained so much attention, I was asked to do a live webinar with Tether Tools to break down my camera rig and the inspiration behind the “First Person Shooter” videos.

Most of you are thinking.. why on earth would I want to carry around a rig like that? Well, It all comes back to providing quality content for your clients and your followers, which iI cover in detail in Content Is King – Five Fundementals To increase Social Engagment. A “First Person Shooter” video is a breeze to produce and can be an instant hit. It can not only provide a very unique behind the scenes look, but can be very insightful to a photographer looking for the right candid knowledge. I’ve learned to keep them short, fun and upbeat as our attention span for online content is about the same of a 3 year-old-child.

Grab a GoPro, some mounting accessories and throw the footage in your next behind the scenes video. Be sure to share, when I see anything from a first person point of view, in some weird way it takes me back to that nostalgic feeling of slaying apocalyptic aliens in my parent’s basement. 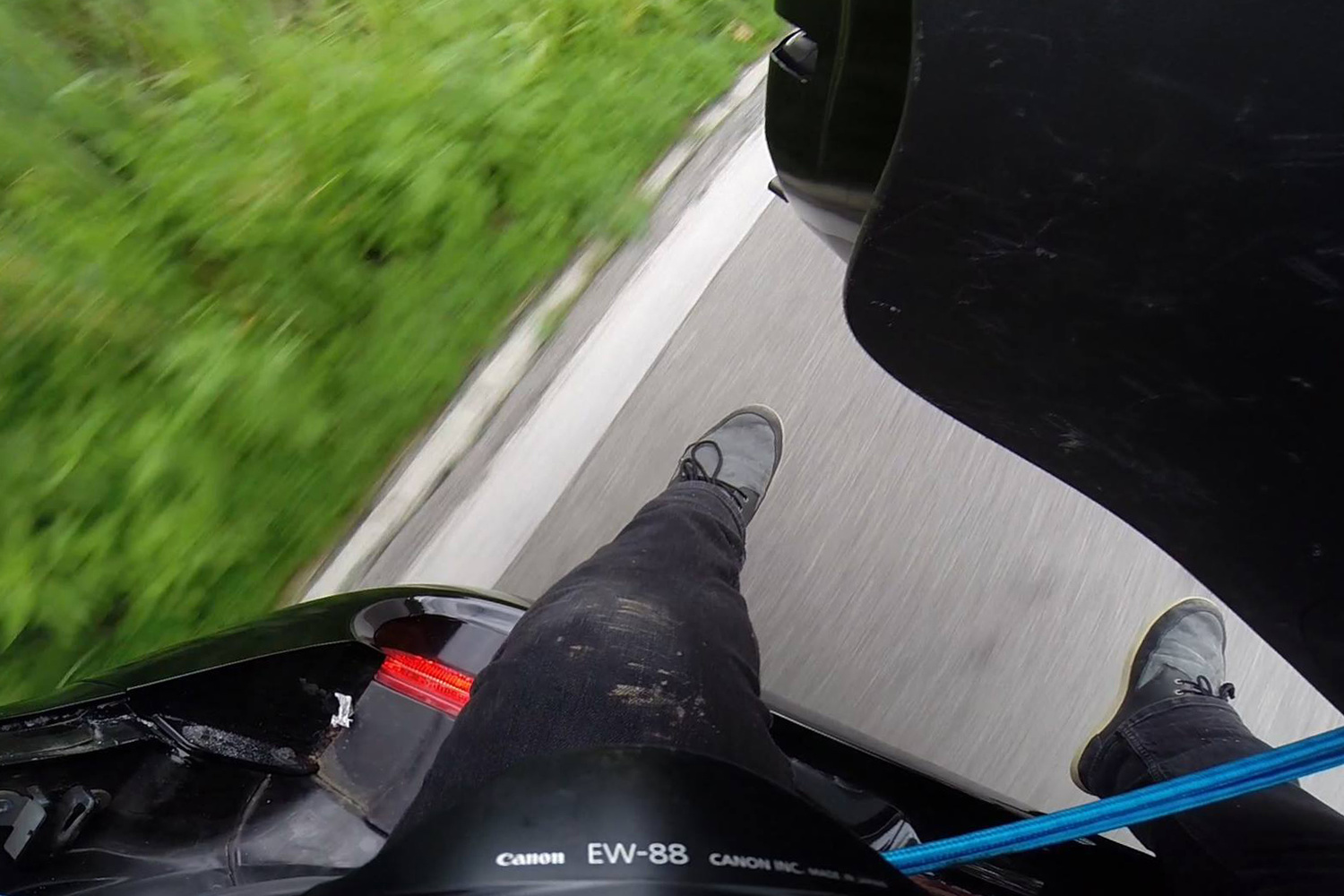 BTS / December 6, 2018
A Step-by-Step Guide to Making Your Own Portable V-Flats

I love seeing those first person behind the scenes videos. Provides a fantastic insight into how people do things in the industry. Keep up the great job Clay - love your work!