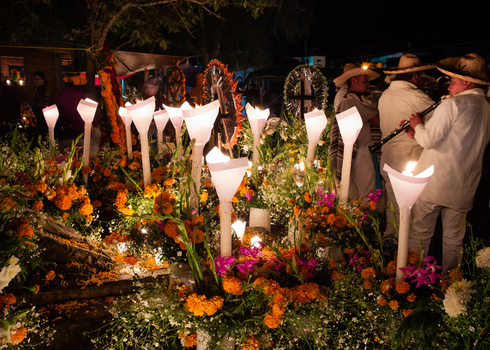 Are you with me?

The mariachi plays at midnight at Tzintzuntzan's Noche de Animas festival. During the All Soul's Night celebration, families hold sober--and sometimes not-so-sober--vigil at the graves of their dearly departed.

One local I spoke with told me that the recent introduction of mariachi bands into the mix has created quite the party atmosphere at what was once a fairly reverent celebration. Still, even as an outsider, I could sense the deep love the families have for the deceased. In spite of the raucous flavor of the festival, I was moved to tears at the sense of loss that must still reside inside the partygoers.

As of this writing, I recognized that my own family has been blessed with minimal tragedy over the years. We're not a huge family, and even our distant relatives have mostly escaped untimely death. Now, with our parents climbing into their mid-nineties, my wife and I know that their time to depart will soon come. I wonder: will we be able to show the same reverence for them that the Mexicans seem to easily muster, year after year after year?

Capturing candlelit images in the pantheon is quite a challenge. High ISO and an open aperture is a must. In this case I wanted the magnolias in the foreground to be largely in focus, since they play such an important part in the culture of the Noche de Animas. When the clarinet player turned momentarily, I had to squeeze of the shot, which was hand-held for 1.5 sec! I'm amazed I was able to get a fairly sharp result.

Joe Stermitz
Cave of the Guácharos
0

Joe Stermitz
Are you with me?
0

Joe Stermitz
Do this in memory of me
0