by Lee Morris
Jay P. Morgan seems to be releasing one great BTSV after another. I have enjoyed them all but I must admit that this one is by far my favorite. At his last workshop, Jay used a 5D Mark II and 4 studio strobes to professionally light his western themed set. If you don't have all of the studio gear yet, keep in mind that it is possible to light scenes like these with much smaller and cheaper speedlights as well (like the SB-900 or 580EX), just keep in mind that they will not be as powerful as a studio system.

by Patrick Hall
Portrait photographer Platon is best known for his stylized wide angle photographs of political figures such as Bill Clinton, Mahmoud Ahmadinejad, Vladimir Putin, Hugo Chavez, and countless other iconic leaders throughout the world. His images have graced the covers of Time, The New York Times Magazine, Rolling Stone, and Esquire to name a few. For Platon, putting himself in a position to capture portraits of some of the most unapproachable and impenetrable political rulers has not only been stressful but also extremely dangerous. Such was the case when he set out to Burma, one of the most dangerous countries in the world, to photograph opposition politician Aung San Suu Kyi. In the video below Platon recaps his experience being chased by Burmese secret police in his effort to create the cover image of the January 2011 issue of Time.

by Patrick Hall
Ella Manor is a fashion photographer based out of New York City who approaches her photography in a rather unorthodox manner. Much of her work combines beautiful models and extravagant clothing with dreamy camera effects and often times double exposures. Her hybrid style lends itself to the unpredictable nature of Lensbaby lenses so much so that she has been labeled a "Photo Guru" by the lens company themselves. This video showcases her latest photo essay Power House and explains how she approaches her photography from both a technical aspect and also a visionary aspect. I can't say I've ever seen anything quite like this before but judging from the images on her website I think I like what I see.

by Lee Morris
The biggest problem with photographers today is that we don't actually get out and shoot enough. It's so easy to watch videos of others being creative or wait until we have that next magical piece of gear before we plan a shoot. What happened to taking pictures and being creative because that is what we love to do? Calle Hoglund did just that. He had an idea one night while his buddies were over and he shot it that night. Luckily for us, he also filmed his progress, enjoy.

by Patrick Hall
While watching Carson Daly the other night I was exposed to a really exciting photographer named Andrew Zuckerman. On the show he was promoting his newest project MUSIC which I'll probably post here later in the month. But while researching his other works I came across an older project he did called Wisdom. These last few projects Andrew has taken on have involved shooting people (or animals) on pure white backgrounds while simultaneously interviewing them for a documentary. It's pretty brilliant to have both the single frame and the interview for both formats and what Andrew gets his subjects to reveal is really worth its weight in gold. Check out a little behind the scenes video on how he made Wisdom and check out the final hardcopy book here. https://www.youtube.com/watch?v=eTkCTajmEIQ

by Patrick Hall
If you've ever seen one of those movie or tv show posters then you probably already know that they are usually huge composites of every actor. But that doesn't always mean that the different characters are simply shot against a white background. Check out this fun video featuring the cast of House season 6 as they pose for different promo shots in a studio large enough to fit an old motorhome. Photographer Florian Schneider has an excellent site to browse and even has an image or two from this shoot posted.

by Lee Morris
Kam Khan is most well known for his incredible self portraits but he decided to mix things up with his newest shoot. In the video below, Khan shows us how he brings clothing to life with some strobes and photoshop work. The video is by no means a big production but the concept is a pretty unique idea. Check out his full blog writeup here.

by Patrick Hall
Photographer Dave Hamilton sent us a fun video he made a few weeks ago and I thought the photos were really interesting. It also reminded me of the time Lee and I shot in a similar hotel room :) So after telling Dave that our readers would really enjoy hearing more about his lighting and the setup, he created a second video outlining the entire day. Shooting in elaborate spaces that you aren't completely familiar with can be daunting and to execute a photo well you need to know how to maximize your light. It would be a shame to have a $6000 or $15,000 a night room and not utilize the space itself! Check out this video of the actual shoot and check out Dave's detailed video in the full post.

by Patrick Hall
One of our reader's emailed me this fun concept photoshoot by photographer Levy Moroshan and I thought I'd share it with everyone this new year's weekend. The styling for this is pretty straightforward: fashion evening gowns with retro style airplanes. Most of the images are lit with just two Photek Softlighters and both the out of camera shots are shown along with the final photoshop edits. Too bad we didn't get to hear from Levy himself in this video as I'm sure judging by his portfolio he has a lot of useful tips to share. 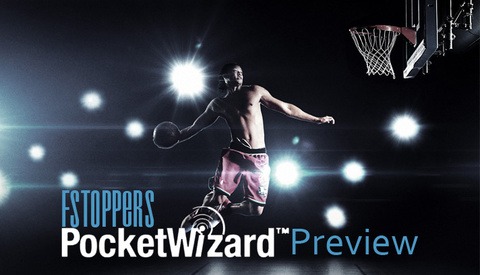 by Lee Morris
Patrick and I have been in contact with LPA Design (the company that makes Pocket Wizards) for a few months now and we were excited to hear that they would be sending us a few beta units of the unreleased Nikon FlexTT5, MiniTT1, and AC3 units. Our website is not about reviewing gear but we did want to push these units. I called up Sigma and asked for a loaner 800mm 5.6 lens and Patrick planned a shoot that involved every SB-800 and SB-80DX that we own. Check out the video below, and then view the full post to read detailed info about the shoots and check out the high res images. If you enjoy this content, follow us on Twitter to stay updated when our next video is released.

by Lee Morris
Kent Marcus was inspired by the book The Adventures of Tom Sawyer by Mark Twain and wanted to do a fashion shoot with a little Swamp flair. Half way through the shoot he looses his main strobe in a water accident but continues flashing with his backup 580EXII. Check out the BTSV below and head over to his website to see the final images because they look much better there than in the video.

by Patrick Hall
We hope everyone had a wonderful Christmas Day and even got a few new toys to play around with. Lee and I are currently both back home with our families as many of you are yourself. So instead of going all out with a really in-depth video I figured I'd share something a little less serious that you may find amusing. The new season of Jersey Shore is coming out in Jan and MTv just released a new BTS video to promote it. My question to you is "If you had to photograph the entire cast of Jersey Shore, what would you do?" Jersey Shore - MTV Shows

by Patrick Hall
Bruce Dale is a veteran commercial and advertising photographer who has also taken some amazing nature and photo journalistic images over the years too. He's worked for National Geographic as well as the White House and companies like Nikon, Southwest Airlines, Caterpillar, and Acura. Finding success in so many fields of photography is not an easy task and that's why I love this career recap video that shows over 30 years of BAD photos. It moves pretty quick, but Bruce does take some time to explain a few of his most memorable images. I always enjoy watching videos from true professionals like Bruce since they really have 'been there, done that' which is not always true of the younger breed of photographers we have today. I hope you enjoy this weekend video and be sure to check out Bruce Dale's website too.

30 Years of BAD Pictures from Bruce Dale on Vimeo.

by Patrick Hall
Do you guys remember that show The Shot that was on VH1 maybe 3 years ago? If you do then you probably remember 1st runner up Dean Zulich. Dean has released a great behind the scenes video that outlines everything involved with two of his shot setups. The results are great, and I think this video has something for both the beginner photographer and the experienced photographer. It's nice to hear Dean admit that sometimes you have to shoot on set with the realization that some work will have to be done in post production later. Great photography isn't always about doing it all in camera or all in post but rather knowing your original vision and making it happen...after all that's the only thing clients care about!

Behind the Shot from Marko Slavnic on Vimeo.